Last night I received a rejection letter from MICA. I am not taking it as hard as KT thought I might. I am disappointed, but only because I won’t be working on my painting for seven weeks straight this summer…which is, I think, a positive reaction. They didn’t offer any explanation about why I was rejected, but I wrote to them asking for feedback on how I can improve my chances next year.

In the meantime, this means that I can say “yes” to Imagination Stage summer camps and to Trixie and Lobs. And it also means I will be free to continue to make work that I enjoy. And, perhaps the work I was doing, previous to the application, was not yet ripe for picking…the warm winds of spring and summer will undoubtedly help ripen my work, for a winter harvest of another application.
2 comments:

It's about the images stupid...

I am going to start putting more images into the blog. From now on, I will try to put the image first, with brief commentary, and then get to the diaristic stuff… 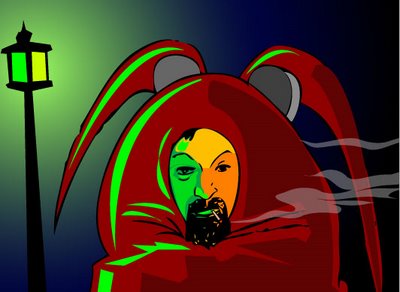 This is a sketch that I have been working on for the Lobsterboy T-shirts. It is intended to be a Sinatraesque portrait of Lobs, full of melancholy. I see Lobsterboy as a tragic figure, he can’t tell a joke, he’s from thee ocean, so he’s a “fish-out-of-water”, and he can’t take off the lobster suit… The image was created on my trial version of Illustrator CS. I think I will need to break down and buy it in 29 days. Although I haven’t figured out the live paint features entirely, it’s a great improvement over Illustrator 10.

Deb has been working hard to get the website up to speed. I still need to do the heavy lifting of labeling everything and creating an overall look for the site. I’m thinking that I should push the sausage-on-fork motif a bit more…

My brother announced this week that he was leaving his theater carpentry job for a “new construction” carpentry job in Fairfax. I understand some of his reasoning, but it still seems fishy to me.

Kate talked me out of going up to see the MICA MFA candidates talk today. She said that it would just drive me crazy, not knowing if I was going to be in the program or not. Perhaps she’s right, but I still think that it would be good to see what people are doing up there…

I have got an image in my head that needs to be addressed. It’s a spacesuit hung on a nail. No astronaut, just the spacesuit. I have been doing some preliminary research, and I think that I like the way the Mercury astronauts looked. The space suits were silver then and not intended for “space walks” so they have a very sexy appeal. That’s what NASA could use, is some sex appeal…Anyway, I am going to go down this path and see where it leads…
No comments: 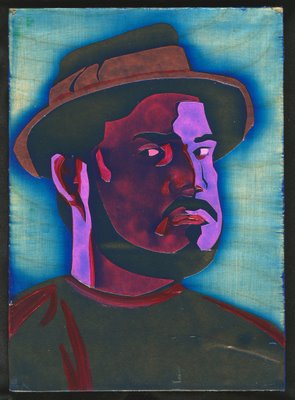 Self Portrait, Winter 2006
5"x7" Acrylic and Paper on Wood
Here's a self portrait that Haze bought from me. I consider self portraits a benchmark for progress. This one demonstrates that my cut paper method can be used outside of the purely silly and comical vein. Its a bit more "dark" than everything else...but aren't self portraits supposed to be a bit "Goth"...
3 comments:

The opening went well. Where’s Osama, is still for sale. So get yer butts down there and get a good old dose of your first amendment in action…
Studio One Eight announced a membership program at the end of the opening. I am a bit suspicious of something like that, because it feels a bit like pay-for-play…and I think it belittles our intelligence that they framed the concept with the idea that there is some kinda “movement” going on here.

Haze and Trish moved out of their house today, and moved into a slightly farther away one. It is really sad that we get to know some really great neighbors the week before they move away. Not to mention that Haze is buying everything from off my walls…It’s great to have a supportive fan (that didn’t come out the way it was supposed to….) 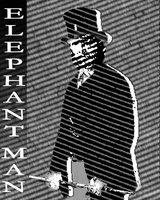 The rest of the week has been a slow motion restarting. I was all geared up to get some projects taken to the next level, when Kate called in a favor. She wanted an “Elephant Man” image, for Olney, and she wanted it pro bono. I wound up trying to make something fast, but didn’t get the right type of info from her about the show. She has been having trouble with the show in general, and I wasn’t helping by trying to pin her down about it. Long story short: After about four attempts, I am no longer working on the Elephant Man logo.

I have got a lot of sketching to do for Lobsterboy, which I will try to do tomorrow (I’m taking a sick day…I could tough it out, but I know when its best to nip it in the bud) along with balancing out BAPA’s needs (they want me for the summer, but I told them I wont know until April 1 thru 15) and keeping Trixie warm about her sardine can…

Jarret has devised a knife throw for Tom Sawyer that he might donate to Lobs…which might be a really cool act for him, and it would be good for Jarret too…

Lastly, Deb has started to revamp the website. It looks a lot better than it did before and the blog links from it! This means I better watch what I say….someone else may be reading this…
No comments:

Late again with the weekly update. I have been working all week getting the “Where’s Osama?” out the door. It turned out to be a pretty good picture in the end. I never really did a full blown landscape before. This has a lot of expressionistic brushwork and layering. Which is fine, because it helps convey the scarred nature of Afghanistan and Pakistan, as well as my psychological frustration about the war. 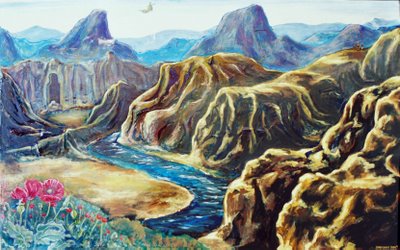 I have made little progress on the other artistic fronts, but I really want to keep the momentum up. I will start on some Lobsterboy stuff soon. I want to do a “black and white” horror movie kinda thing. Using colors that approximate black and white, while not being pure black and white. I also did a self portrait using my cut paper tecnique, which gives me reason to think that I can cross my stuff over to a more serious mode…

This week has also been about getting Sara moved into her new place, and getting used to my new Treo 650…

The opening is this weekend, so I will give you full updates afterward.
3 comments:

It’s just been a crazy time this past week. I got a new phone, which means that I am sucked into its vortex of newness and setup; it’s also a vehicle for procrastination on a painting that I have to have done by Monday. As it turns out the Art of War at Studio One Eight, decided to let me show a piece. I need to crank this baby out fast!

I started with the idea of a “where’s Waldo?” but with Osama. But I changed the idea a bit to be more subtle. It will be a mountain range that approximates the border between Afghanistan and Pakistan…Tora Bora, but done in my cut paper method…

I could talk more about it, but I have to go to a meeting with a theater group that performs in the Washington Monument in Alexandria…I fear that I will have to tell them no…
1 comment:

A Clean Studio, A Clean Mind

I met with Lobsterboy. He’s nice enough, but I got the impression that he is at the tail end of the lobsterboy act. He was kvetching about his days with Ian Allen (immediate red flag in my book) and cherry red. “At one point you realize that you can’t drive around with a suitcase full of dildos forever” he said. He’s 35, which is kinda spooky, cuz I have started to look at life in five year chunks, (cuz I’m turning 30 soon) and I don’t know if I will be saying the same thing in five years…Anyway, I think the meeting went well. But I am really having a tough time getting my head around people’s hesitancy about having a backdrop. I am working on ideas for T-shirts; he wants the iron on kind…

I made some progress on the Deb logo. I pilfered the phoenix logo from Pontiac. I need to start thinking about what I want to do to my website as part of our exchange.

We cleaned the basement and finished installing the Elfa. I made huge leaps towards a cleaner studio. I decided to move the Mac upstairs, and consequentially, I purged the studio of all unnecessary detritus. I hope that this will give me a clean slate to start working from. I am scared that I have set myself up for disappointment, because I am trying to live up to the statements that I made in the MICA application. Now my procrastination has taken the form of cleaning. Soon, I will have no excuses….

I am going to the monkeyhouse tomorrow. I don’t know if monkeys will figure heavily in my next step, but I figure that some life drawing can’t hurt. It has been a long time since I sketched anything from life.

In this months Modern Painters Matthew Collings Diary has a provocative flow to it. He reviews an artist who makes paintings that recall the constructivist movement, abstraction from the 1910s-30s. He says that they are good at forcing you to think about how paintings are made and how they are good.

“…Here, instead, the muted color was muddy and the lines were lifeless. The overall effect was a deliberate blankness. The emotional response could only be disappointment, I thought, unless you weren’t really interested in the qualities that Abt’s paintings at first appear to be about….The statement is that yes these are colors and lines but no I’m not interested in that kind of thing – Who on earth would be? You realize that she doesn’t think that there is anything there in the original model worth bothering with and clearly the critical buzz around her at the moment agrees…Abts refers to something sophisticated, refuses to get involved in its sophistication and offers something crude instead. It’s a model not of a fraught moral position or contents that have to do with the meaning of existence, but of efficiency vs. authenticity. The goal is not to get people to be moved by art. It’s about trying to capture the interest of people who can’t be bothered to find out what art is and what gives it its capacity to be moving, by getting rid of anything that was ever genuinely moving about it. This isn’t an act of fierce Nietzschean individualism. It’s an act of conformity, of obedience – going along with what everyone else is doing….”

I think Collings is on to something here. Are we so evolved that we can only look back at art history for material to parody? Is blankness the new intellectualism? Making the artworld work more efficiently is a commercial goal, but what about the high falutin' goals that were real when they were employed in the past?