So, it's really just Kirstra's Camera that has contributed to the Yuri's Night photo pool so far (Thanks Kirstra!) I am happy to post these choice photos on BTT because Kirstra's hard drive had something of a EPIC FAIL, and wiped out her photos...except these lucky few... 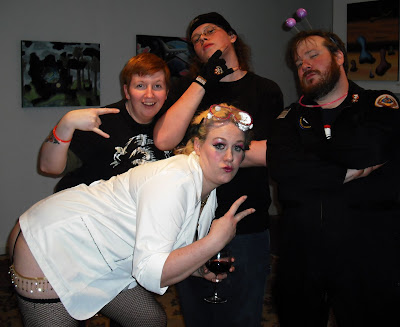 Bambi, Heidi, Jim and yours truly...that's just how Yuri rolls! 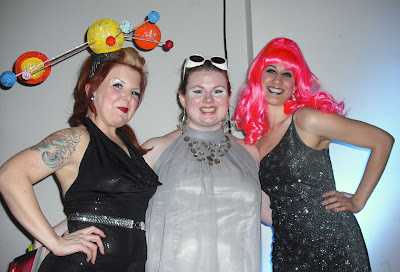 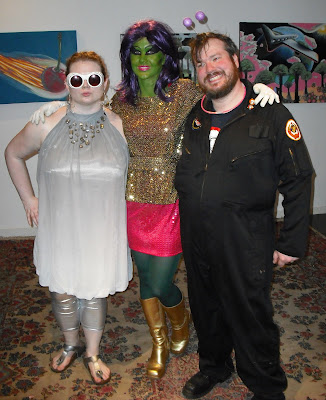 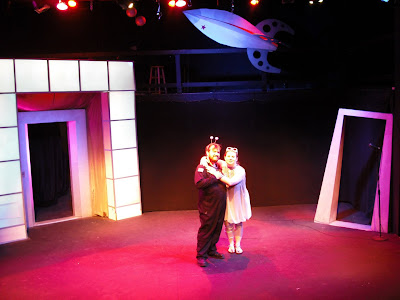 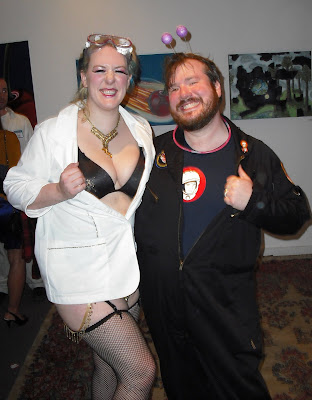 Bambi and I get cosmo-naughty! 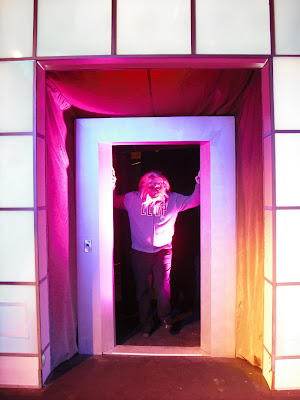 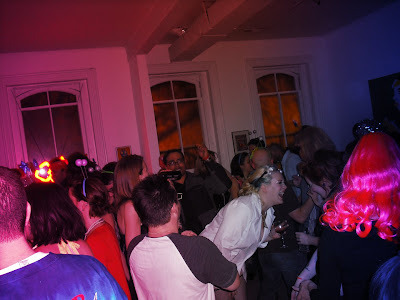 The Dance party was off the hook! Thanks DJ P-Vo!
When more photos roll in, I'll be happy to post them! (you know you've got some!)

I have cleaned up most of the house and scene shop, so I haven't really had time to make any art per se...but I will have some early designs for a photo op sponsored by Red Bull by this time next week! (and of course there is the ramp-up to this year's Artomatic to worry about!)

The other piece of news is that Follies got reviewed by the Washington Post today...It's a mixed review, but not where the set is concerned...Michael Toscano says:

Jared Davis's large set is gorgeous and functionally innovative enough to accommodate the crumbling present and the glittering past.

...Which is officially the nicest thing that the post has ever said about my scenery....
No comments:

THANK YOU FOR A STELLAR YURI'S NIGHT!!!!!

This year's Countdown to Yuri's Night was the best one yet! Thanks so much to everyone for coming out and filling the Warehouse with your intergalactic alien love! (we didn't even mind the probing this time!)

So, predictably, I ran out of battery juice when I started to take photos that night, so I don't have very many to share (except for this provocative placeholder photo of Lil' Dutch) 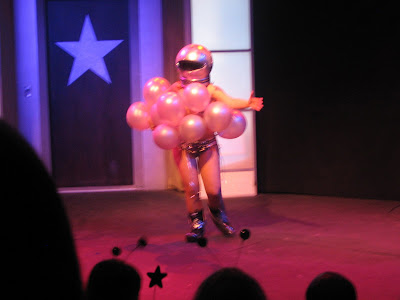 So, in the meantime, I want to encourage any of you BTT readers out there that attended Yuri's Night to send me your best photos! We want to compile a bunch of good photos to post on the www.outofthisworldparty.com "2009 photo gallery" so we can give people in the 2010 event something to shoot for!

I will post Yuri's Night photos here also, as I receive them...

Out of the frying pan into the fire...FOLLIES opens this weekend! The Arlington Players have a really good show on their hands...the only problem for you, loyal BTT reader, is that the superb lighting design (by Hal Crawford) looks great in person, but does not photograph well with my equipment...so I offer these shots as a mere taste of what a fantastic show it really is... 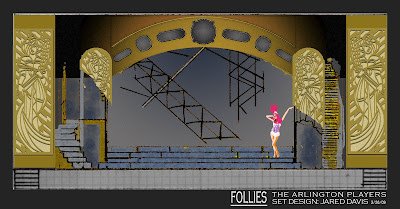 Follies Act II "Loveland"
(hey, where'd that giant fan come from? see the show to find out!)
Also, I must put in a plug for Walmartopia (it closes on the 26th!!!)...I was able to rustle up some photos from Amanda that show off what the Washington Post calls "Spartan" scenery...but what DC Theater Scene says is:

...I feel as though I have watched a theatrical bar mitzvah. At the end I wanted to stand up and say “Today, you are a theater company."

So, it just proves that art is subjective...and that Walmartopia is probably a good show for you to see if you like Spartans or bar mitzvahs... 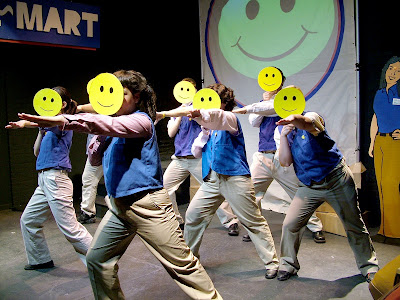 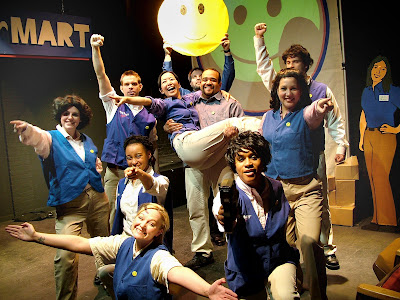 With co-workers like this, who wouldn't want to work at Wal-Mart?
No comments:

So the headline this week is that WALMARTOPIA opens this weekend (Actually it opened on Thursday) Unfortunately, I haven't been able to get photos of the set during dress rehearsals, like I usually do. So this one is going to be a big secret that can only be revealed if you GO SEE THE SHOW! You can get tickets here 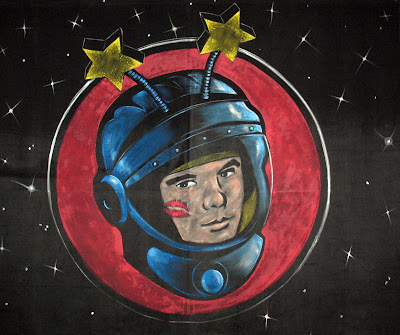 Yep. that's all...we are so very close to launch, that I can practically taste the astronaut ice cream with a Stoli chaser! Get your tickets to this soon, as we have sold a bunch of the 9pm tickets already!

And just to add insult to injury...(I am suffering from burning the candle from both ends lately) Follies begins its load in this week...So, here are some random pictures of scenery that is lying about the shop, waiting for transport to the theater: 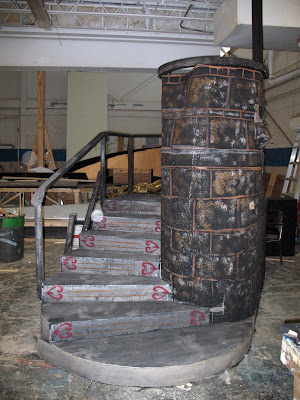 SL tower for follies...the idea is that it supposed to look like abandoned scenery...are we close yet? 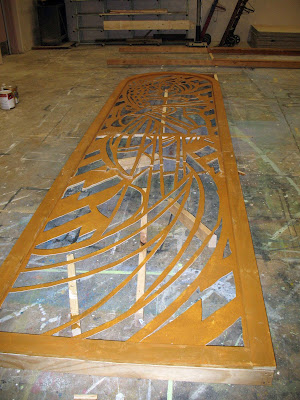 One of the upstage "ladies" that will become a sort of light box...halfway through the paint job...yeah, its luan, so that's a lot of jigsaw blades...
No comments: