Ive accomplished a lot this week, even though I only have one picture to show for it. In fact, this may not seem like much, but getting the second sketch done for Mumbo has really propelled that project into the "Oh Crap that's really happening" category... 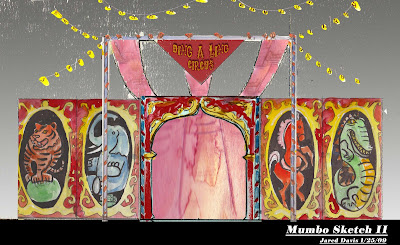 MUMBO Second Sketch
Watercolor and Photoshop 3/8"=1'
So, what happened was that all movement on Mumbo ground to a halt because funding on both ends had failed to materialize. I didn't want to commit to ordering lots of scenery equipment (pipe and drape, paint and whatnot) without a solid commitment that it would be paid back, (not to insinuate that they aren't good for it, but its theater...) So, I basically couldn't start working on it. Additionally, they were hoping to "workshop" the show in Vermont in the three weeks before it opens in Baltimore. So, that means I needed to have the whole shebang complete by Valentines Day...

What approval of this design does is enable me to use the black velour that I have been using for Diamond Dead, Dutch Oven, Spooktacular, etc. Which is great, because I have it in hand, it costs me very little in up front costs (although the stuff is valuable in and of itself, so its not "free") and it enables me to paint in a "black velvet" sort of way, which is what I have been doing thematically for a while now...in short, a win win.

I will start working on that this week, and hopefully have some photos to share in the next, er, two weeks.

I have also been plugging away at Follies. The director basically re-assessed the direction that the set was going in during my first drafts, and has pushed me in the direction of a more "unit" set. Which is actually a relief, because there were a great number of unknowns in the first incarnation. I don't have much to show at this point, because I have been refining the design mostly on paper, and don't want to scan stuff just for the sake of scanning...so you will just have to wait until next week.

I am looking forward to this weekend, where its that time of year again, time to push debutantes! You can go here to get a small sampling of the craziness that is the indoor DC Mardi Gras. As a bonus, I have roped KT and several other friends of mine into the pushing this time! I will definitely take photos this year!
No comments:

Please enjoy this summary of our inauguration experience...

It was a pretty exciting and frustrating day for us. We got up at 7am and KT, Jaya, Molly (Jaya's friend) James (an Olney intern) and I piled into the Echo and headed downtown. 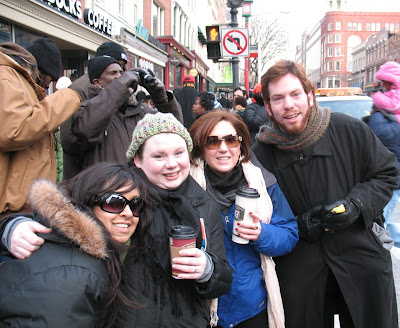 Jaya, Kate, Molly and James...note the soon to be ill-fated coffee...
We got as far as Florida and Georgia and had to park the car because of National Guard troops blocking 7th. 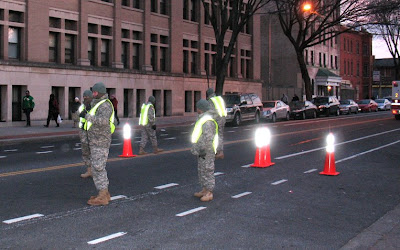 National Guard @ 7th and Rhode Island Ave.
It was cold at 8:30 AM that morning: 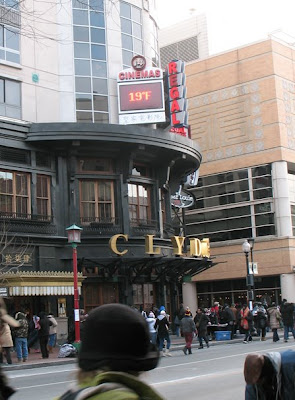 Nineteen Degrees in Chinatown, 8:30am
We walked the rest of the way to the 7th street entry point (the intersection that Woolly Mammoth Theater and the Bead Museum are at) and hit a large crush of people trying to get into the gate. 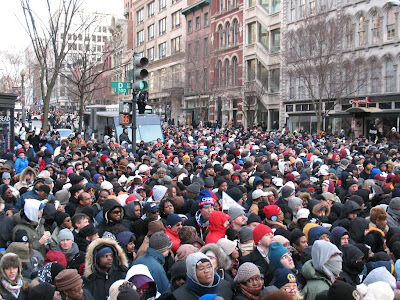 This is 7th St looking North. The photo was taken by a guy on a light pole I handed my camera to
We stayed there, squished together in an "almost deadly crushing situation"for about an hour when we were told that the generator that powers the 4(!) metal detectors was broken and that they weren't letting anyone in. 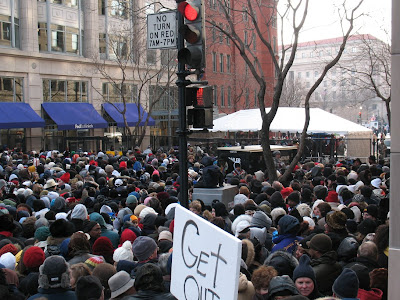 This is 7th street looking south at the gate and the generator that was supposedly broken...just barely visible in this photo are the policemen in the windows of the second floor of the building with the blue awnings. They had Krispy Kreme donuts and were apathetically looking down at the situation below. 9:15am
Since that situation was about to become ugly, we backed out and went to 10th and E St. and got into the same sort of crush. 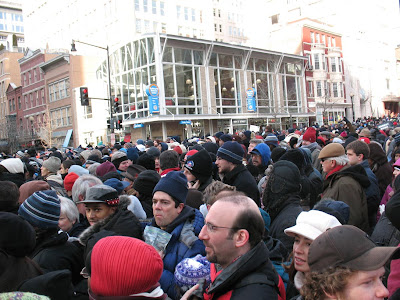 10th and E St. Looking North. 9:30am
We got to 10 & E at 9:30...we didn't get through the "line" until 2:30 (!!!!)...there wasn't a single moment where I had enough personal space to lift my arms above my head (but the body heat was keeping us warm) and there was some pushing that had me scared for a moment or two...(one of the craziest things about this was that there were children and infants in the crush!) 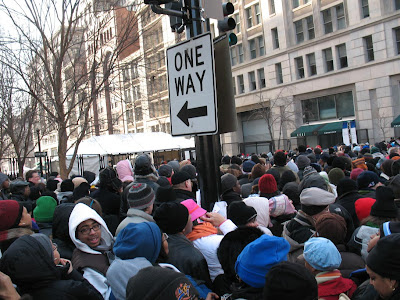 10th and E St. Looking South towards the gate that we would pass through, over the course of the next five hours.
We heard the inauguration speech from Jaya's cell phone because there were no speakers set up to broadcast anything. 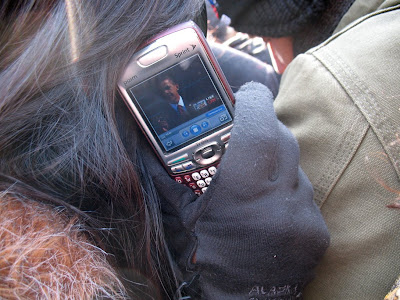 Jaya's cell phone, showing the inaugural speech...complete with faint, delayed and sporadic audio...(don't get me wrong, this is a friggin' miracle of modern science and technology...and makes me proud to be alive at this moment in history...) (shortly after noon) 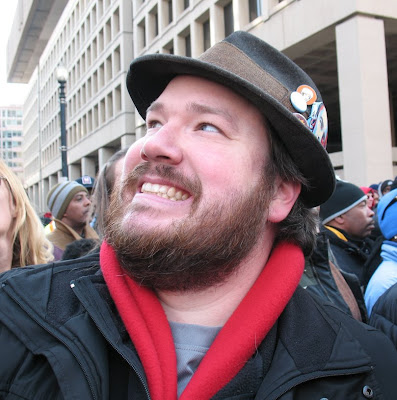 Jared being optimistic about the future, and genuinely proud to be an American...

In fact, information was so scarce, that we had people standing on barricades trying to relay what was happening at the front of the line to the thousands crowded all the way up to F St, because the policeman who (rarely) came out with a bullhorn would only admonish us "not to push" (and he couldn't even be heard anyway) It seems that they were only letting 20 people in every five or ten minutes...you do the math... 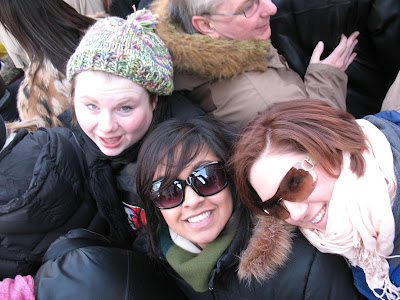 After being separated in the crowd a few times, we surged into the single door that got us into the tent with the x-ray machines. We turned on our electronic devices to prove that they weren't bombs (I guess) and we were finally in! (the first thing Molly did was pee, because she had been holding her 8:30 coffee for six hours!...the rest of us had to go too...but we were too resolved to get into the bleachers before they closed them when the parade started)

Our tickets for the bleachers for the parade said "White-B" as our section. and they also said to use the 10th and E entrance. But when we got in, we couldn't find the "White B" section, and every person that we asked (mostly police and the volunteers with the red hats) either didn't know, or sent us in the opposite direction. So eventually we talked out way into the "Grey-A" bleachers. 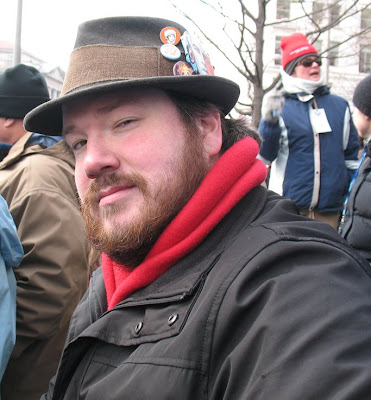 "I know my ticket says that I am in the wrong bleachers, but I'm just too sexy to be denied..." 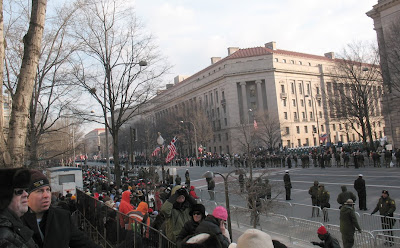 The view of Pennsylvania Ave. from our adopted section of bleachers (3:00pm)

The parade started late because of the Kennedy situation, and it went by slowly once it started: 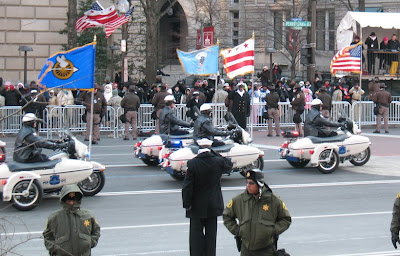 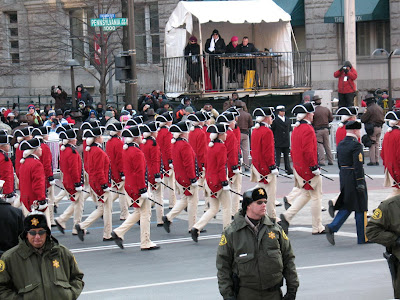 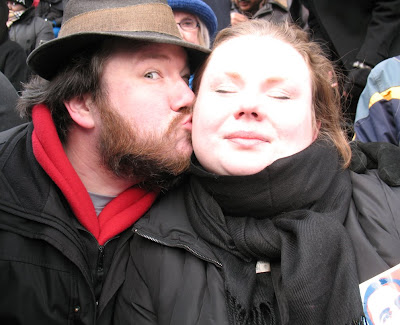 Finally, at long last, we got to see Obama walking outside his car, and I got some blurry photos. 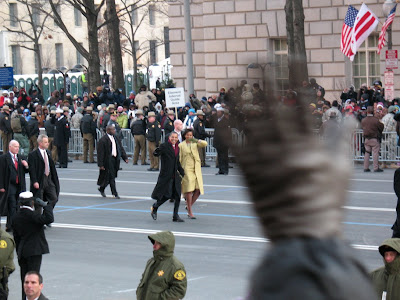 Believe it or not, this is the best photo I got of the new president and his wife... 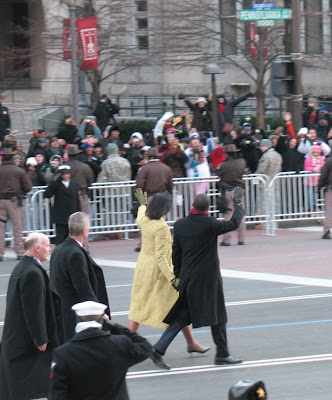 This photo wins for "most in focus"
but it was so cold that we left after Biden went by...as did most of the crowd. 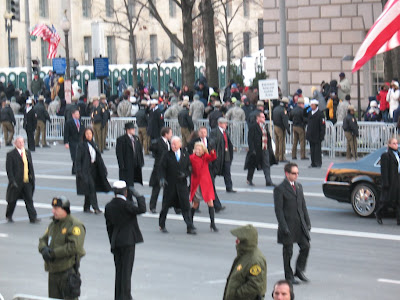 Joe and Jill...
But when we tried to exit, there was another crush to get out at the same entrance!

Eventually we got out of the secure zone, and made our way back to our car, all the while being diverted away from the convention center (our car was on the other side of it) taking us about 10 blocks out of our way... 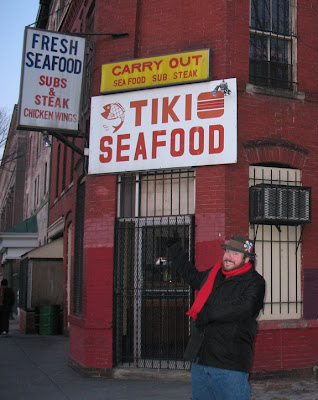 Ive always wanted to take a picture of this sign, but never had an occasion until today! (5:30pm)
We went to the looking glass lounge to eat (because we hadn't eaten a "proper" meal since 7am) and had some of the worst service ever. When we got home, we decided that we were so tuckered out that the prospect of going to the "art of change ball" (to which we had tickets)
at the warehouse (inside the closed off street zone that we had crossed a few hours before) was just not in the cards for us. 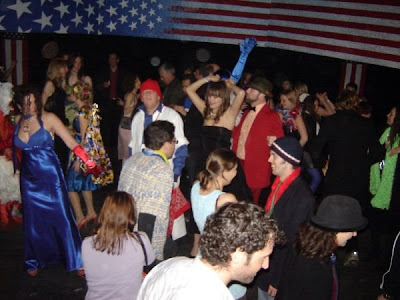 Partygoers danced at the Art of Change Artists Ball at Warehouse Theater. (photo by Valerie Paschall) NOTE Jared's scenery in the background!
so we laid in bed for about 10 minutes before we were asleep with thoughts of Obama dancing in our heads...

However, aside for some ugly moments in the crowd (most of which are better suited for the retelling in person) everyone was pleasant, excited and patient. The one thing I will remember about this historical moment was that I have rarely been as close to my fellow Americans as I was while being crushed in the line...
3 comments:

This time next week, we'll be History!

Well, It was a quiet week in Lake Woebegone....

Actually, the pace has picked up considerably lately, largely due to the impending inauguration...I was able to build, paint and install the Obama Wonderama scenery (again, its actually going to be used all weekend, for four different events at the Warehouse...Saturday-Washington Film Institutes's Pre-Inaugural Ball...Sunday-Obama Wonderama...Monday-Private Event...Tuesday-Art of Change) But unfortunately for you loyal BTT readers, all I have to show you is a crappy cell phone photo of the results: 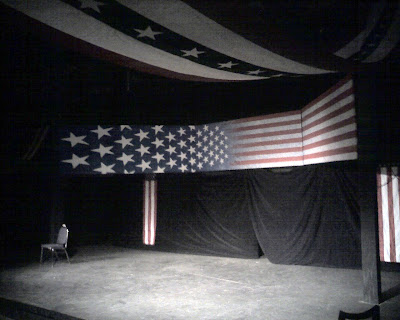 Obama Wonderama Scenery @ Warehouse Theater
This photo doesn't do the stuff justice...so you'll just have to see for yourselves (and I trust that someone will take a good picture over the course of the weekend, right?)
The much more cute crappy camera-phone photo is the one of my poor Isuzu, trying really hard to get into the spirit of its adopted homeland: 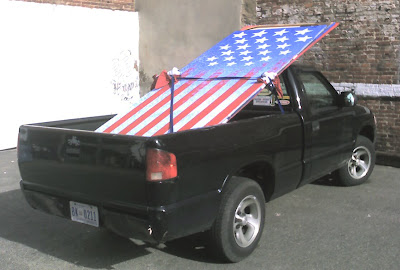 The other progress report this week is for Follies. I started to put the ideas down onto paper, and had a "first draft meeting" with the director. He was receptive to most of my ideas, and had plenty of constructive ideas on how to make the whole thing flow a lot better. 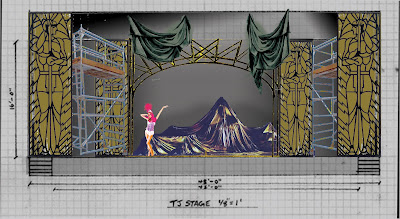 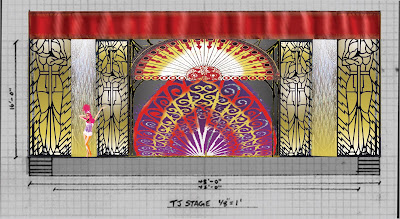 Follies "Act II" First Sketch
Pencil and Photoshop 1/8"=1'
This show is going to be a colossal undertaking for TAP...and it still wont get me a WATCH Award nomination!
No comments:

Musical Of Musicals the Musical OpensTONIGHT!

Musical of Musicals the Musical opens Friday. For those of you not familiar with the show, here is a brief outline taken from the Dominion Stage website:

Step 1: Take a plot straight from old melodrama.
Step 2: Take the same plot and concoct five spooofs in the styles of Rodgers and Hammerstein, Stephen Sondheim, Jerry Herman, Andrew Lloyd Webber, and Kander and Ebb.
Step 3: Cast four dynamic and entertaining performers and one dazzling pianist!
Step 4: Shake it all up and serve one funny and entertaining show!

Ive seen some dress rehearsals, and its pretty funny...but the scenery is a bit difficult to capture on film:

Above is the Dear Abby! sequence of Musical of Musicals the Musical

And the finale, where all of the show titles are revealed...

This is my best attempt at making a "minimal" set...So I primarily used stock scenery, which was necessary because I had a budget of less than $300...

I am also working on the set design for Obama Wonderama at the Warehouse theater (actually, the scenery is going to be up for the whole weekend, spanning four events, so I needed to make it a bit more neutral than I normally do for a burlesque show...) 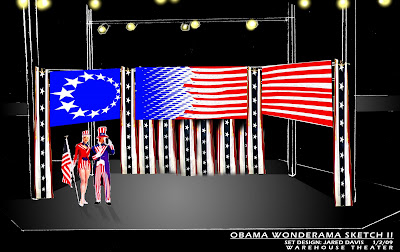 You can get your tickets here. 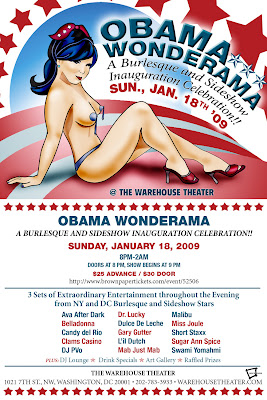 Speaking of L'il Dutch, I am going to be at the Dutch Oven tonight at the Palace of Wonders, they are having a Sci Fi themed show, where I will be giving away some Yuri's Night prizes! See you tonight!
No comments: