"Wrath of Han" got rained out on Friday...but we were able to still show side one of Star Wars: Episode IV A New Hope Laser disc, and Star Trek II: Wrath of Kahn on Blu Ray on the indoors TV...the evening's viewing wound up being a very good inspiration for the Yuri's Night 2012 writers...

This week I started a painting that is slightly larger, in scope and size, that I am used to painting. I have been working on it in a similar vein as Monkey Moonshot. That is, I started with a very rough sketch, and I am letting the composition and details resolve themselves on the canvas. This means that I will be going over the painting many more times than I would if I had everything planned out, but this method also prevents me from feeling that I am simply coloring in a good drawing.

Anyway, the inspiration for this is obviously Elvis' Birthday Fight Club. I am hoping to imagine the boxing match in a much nicer space than the intentionally seedy aesthetic that we incorporate in the live event. I have imagined it as a "fight night" at a theater like the State Theater in Detroit (now called the Fillmore). The center of the orchestra seating has been removed and the boxing ring has been installed. I am hoping to create a sense of space and placement within the theater by using the "knights in a niche" (that flank the proscenium of the theater) as a framing device. You can see the full Knight on the right of the painting, and just his foot, spear and pedestal on the foreground right. I need to work on the balcony some more (perhaps lowering it?) to create a sense of enclosure. I realize that this arrangement may not make sense to someone who hasn't been to the State (which is often also a dance club, where the "audience" can go on the stage) but it has a certain logic, and I am willing to trade that logic for the ambiance of the theater space... I intend to populate the audience and the action in the ring with lots of different characters, but primarily monkeys. As you can see, I have already started doing this with the ring girl and the boxing kangaroo.Of course, this may wind up being an overly ambitious painting (I tend to abandon paintings that take too long to produce) but I have a good feeling about it so far...Below is a closer look at the beginnings of the painting with the studio cropped out:

I've spruced up the place a bit since we last talked...I even got a new URL for the blog: www.artbyjaredblog.com (don't worry, the old www.betweenthetines.blogspot.com will still work, so you probably don't need to update your RSS feeds)...turns out that someone else had taken "www.betweenthetines.com" so, I decided that it was time to make the switch! I also changed the fonts and layout to give it a more "sketchbook" feel...

So, it looks like GLEEAM was well received during the NYC FRINGE FESTIVAL...They got a reviews from Backstage.com, Newyork.nearsay.com, and Redbull.com, and THE FREAKING NEW YORK TIMES!...they have one more performance as of this writing...so if you are in NYC tonight, check them out! 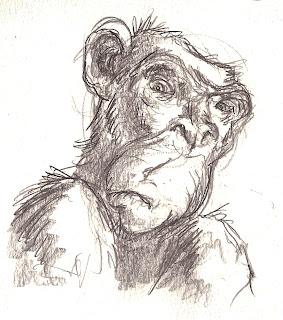 Incredulous Monkey Sketch
Pencil on Sketchbook paper
So, I have been working on some new monkey paintings, but I don't quite want to crush the creative process too early by posting the sketches here...so instead I will leave you with this incredulous monkey.... 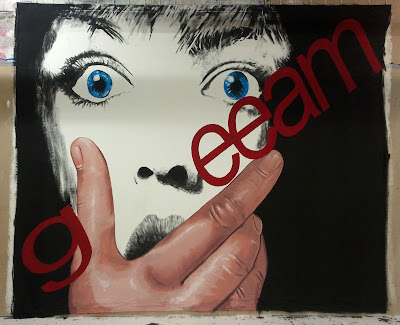 GLEEAM Backdrop
12'x10' Acrylic on Muslin
This week I put the nose to the grindstone and finished the GLEEAM backdrop...for those who need reminding, GLEEAM is Landless Theatre Company's offering for the NYC Fringe Festival in August...its a mash-up of the Musical TV show Glee, and the 90's horror movie Scream. Anyway, I was able to knock out the drop in pretty short order, mostly due to my sweet new shop easel...Below is the drop about halfway done...with artist Rob Lindsay for scale... 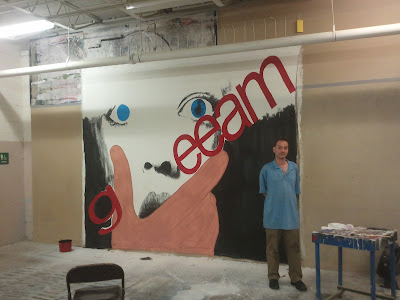 Also this week, in order to celebrate the imminent birth of "Taco" Dobbs, I contributed this small painting. I was told that they were going for a polar bear theme for the baby's room, so I decided to capitalize on that idea, while leaving a few "sub-text" clues for the kid, for when he gets older (you know, like: where did those polar bears get that drum? What's up with the bi-plane? is this a picture that takes place in the past or present? what happened to the drummer? etc...) 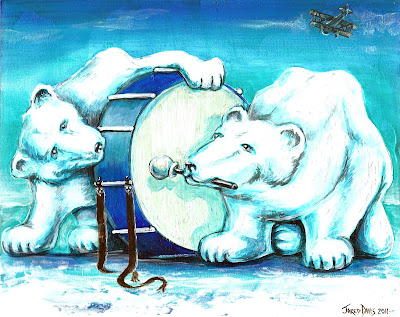 Polar Bears with Drum
10"x8" Acrylic on board
No comments: