I know I posted this video last week, but I think its cool enough to show again, especially since we are only one week away from the opening of the C2YN art exhibit at the Artisphere on Thursday March 17th (also known as St. Patty's Day)

Jared Davis (Countdown to Yuri's Night) from Artisphere on Vimeo.

And since we are very close to the opening of the show, I can show you this screenshot of the www.outofthisworldparty.com website which shows thumbnails of 20 of the 36 artworks in the show! 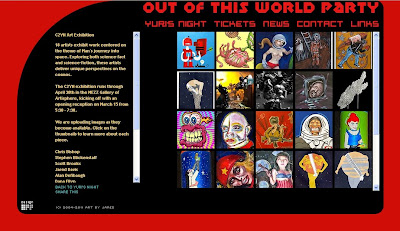 Also, BYT has picked C2YN up on their calendar

Really, this is really just a round about way of saying that the Countdown Clock has started...
T-MINUS 31 DAYS UNTIL YURI'S NIGHT!
This week, we helped try to get the word out about Yuri's Night by participating in the Clarendon Mardi Gras. Check out our float! 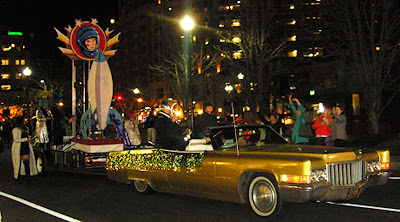 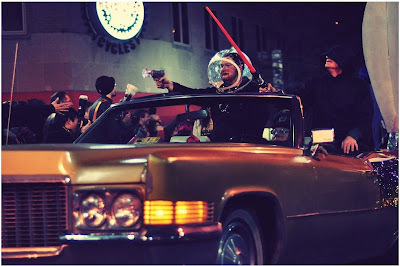 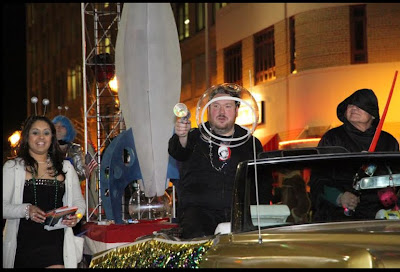 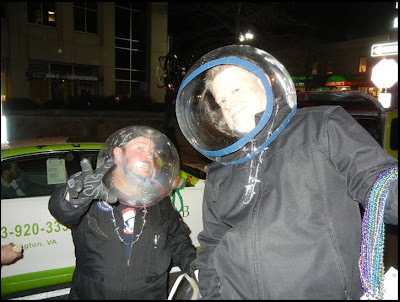 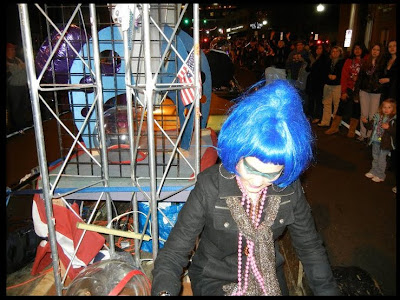 Yeah, I took a month off from the blog...lots happened....I might tell you about it, but because so much is happening right now, I think we should just stick to the Headlines:

Dr. Horrible's Sing-Along Blog opens at the DCAC! Scenery Appreciation Night will be Saturday March 12th, Get your tickets HERE

For tickets and information visit the Landless website at: www.landlesstheatrecompany.org!

Of Course, for you loyal BTT readers, I can share with you the design of the the set: 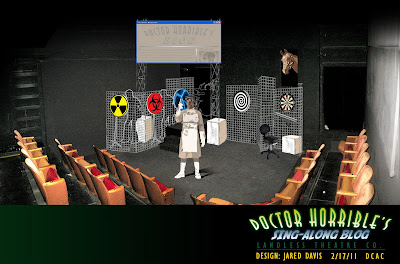 The show is going to be awesome, and not just for you Whedonheads...So buy your tickets today!

The next Headline on the agenda is: What are you doing for Fat Tuesday (NEXT TUESDAY 3/8)? Well, if you are like me, you will be going to the Claendon Mardi Gras parade. Once there you will be able to vie with the throngs in order to receive beads from...THE YURI'S NIGHT FLOAT!!! Below is the super top secret plans for the float...don't tell anyone! 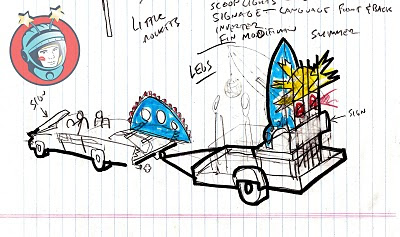 And just in case you thought I was kidding...here's the poster for the event (designed by Richard Thompson!) 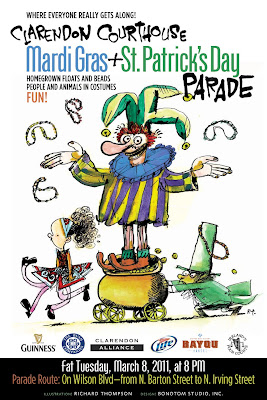 Speaking of Mardi Gras...I just wanted to share a Mardi Gras project from a few weeks back...it was for the DC Mardi Gras in the Dupont Hilton...I just painted the seafood, but I think it turned out pretty good (despite the crappy cell phone camera photo) 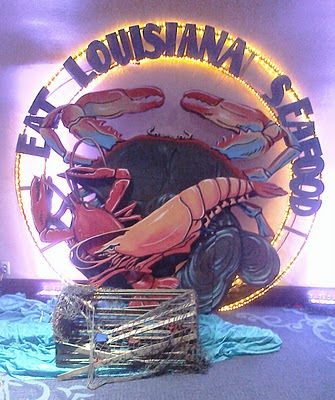 On Sunday I will be attending the WATCH (Washington Area Theater Community Honors) Awards...Seems I am nominated for two awards...both for Outstanding Set Painting in a Musical...Reefer Madness (Dominion Stage) and The Producers (Arlington Players)...this will be my 8th nomination with no wins...Wish me luck!

I did sell a painting this week...He's a collector of my work, and kinda a monkey enthusiast. Anyway, he surprised me when he showed me a tattoo of a piece of mine that he bought: 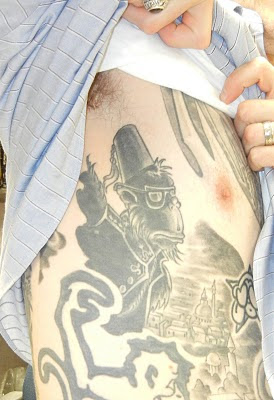 That shady looking monkey is "the spy" from 2006...I like how the nipple looks like the sun rising over the "near east" skyline...

And Speaking of Monkeys...I have been working on a monkey painting for Yuri's Night....I can share some progress shots with you, so you can play the "I remember it when" game... 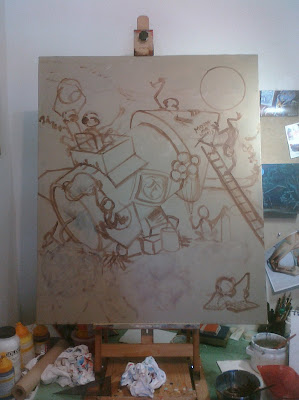 This is the very first stage of the painting. Its a larger painting that I am used to (in fact, the table top easel is not working for me because I cant reach the top of the painting!) but at 30" x 36" its child's play compared to what I do for theater! 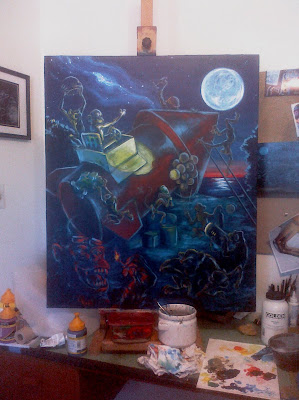 Here's the painting after I've blocked in the color. Its going to be called "Monkey Moonshot"...so it is only natural that the monkeys would try to go at night when the moon is out...I am having a lot of fun playing with the light from the moon, spotlight and match...Hopefully I will be able to get it done by the drop off date for C2YN in less than two weeks!

Just in case you haven't heard, here's the scoop on C2YN (and check out the video below!):

Jared Davis (Countdown to Yuri's Night) from Artisphere on Vimeo.