PLANET ARLINGTON, or the reason I never get labor day off... 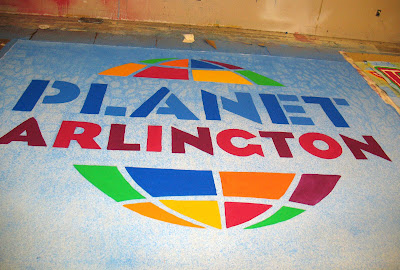 I finally got finished with the Planet Arlington World Playground backdrops, just in time for their big debut tomorrow! I had some technical issues with the paper sticking to the back (I thought I had the problem licked, but it still occasionally comes back to bite me in the ass) but other than that I think that they will look great! Hopefully they will be able to brighten the atmosphere at the festival...seeing as the weather is predicted to be a wet half hearted rain all day... 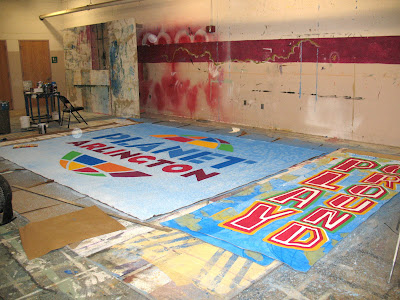 World Playground drops on the shop floor
Planet Arlington represents one more piece of the scheduling puzzle being knocked down, so I can concentrate on the other big looming projects...like Forum...

Completing the painters elevation was a huge step for Forum last week. I am now able to give direction to my (quite small and ever changing) painting minions. Next week should be the big, final push for painting the show. (we load into the theater on September 11th) 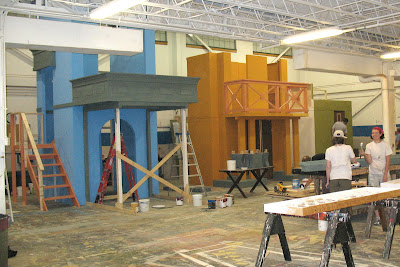 Progress has been made from last weeks photo...

And Lastly, this week I was only able to produce two more small velvet paintings (so I am a tad behind schedule for filling up a whole tent...but I always have Mr. TIKIHEAD to fall back on!) Also, I am learning more and more with each velvet painting I make...For example, this week I learned that painting sexy babes on velvet is really cool, but also that the faces are really hard to do on such a small scale...I have gotten a really high quality velvet, so the nap is very tight...but on a face that is the size of a quarter, each stroke is highly visible (and you cant make any mistakes with velvet...because you cant just repaint a section that has been "soiled" with paint!) I intend to paint more Space babes and Tiki babes...but on larger canvases... 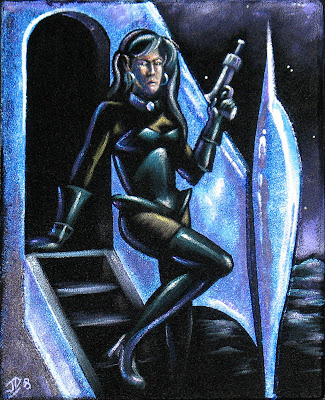 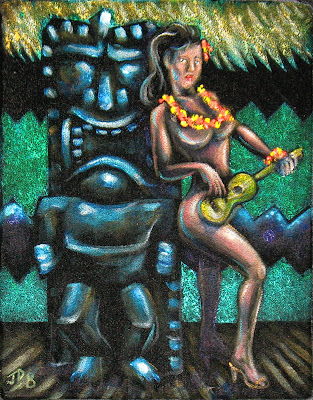 I have a larger still life in the works this week...which may or may not be finished by next posting (I am learning a great deal from this one too)

Just a quick mention of some stuff on the horizon...I had the first production meeting for President Harding is a Rock Star this week...so designs for that are coming up soon...and I have been talking with Trixie and Monkey about designing scenery for their upcoming (perhaps traveling show), codenamed "Mumbo"... I am totally psyched about that project...I just hope I can squeeze it in between all the other stuff between now and...does it ever really end...?
No comments:

Thanks to everyone for making the first appearance of the Reverend Loveseat, at Dr. Sketchy's such a success. L'il Dutch and Sugar Ann Spice were just fantastic, and there was a pretty good turnout of sketchers...if you have any good photos (or scans of particularly good sketches) send them along and I will post them here! 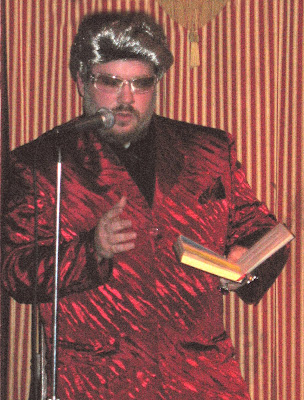 The good Reverend preachin' from the good book of bad jokes 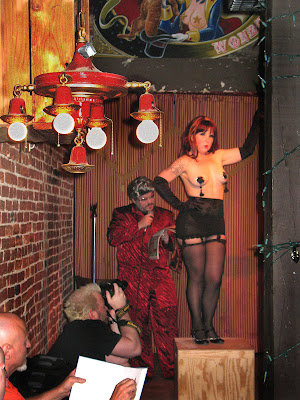 This photo says it all...it was a very good night!
Hopefully we can talk the Palace of Wonders into doing another Dr. Sketchy's in February...we were even reviewed...

Just after posting the previous post I went to see the Jerry Springer Opera at Studio. It was some of the best theater I have seen Studio do. In fact, the guy who plays the "warm up guy" role (and another role, but I wouldn't want to spoil it for you) is top of the list for my nominations for a Helen Hayes Award...(if I could vote)

On a personal note, my Mother was in town for a recertification class (something epidemiologists need to do from time to time, I guess) and we got a chance to check out the bonsai gardens at the National Arboretum... 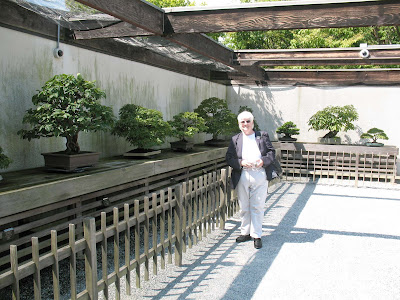 Mom and lots of really old, tiny trees
I can also report that progress has been made on Forum. Well, carpentry at least... 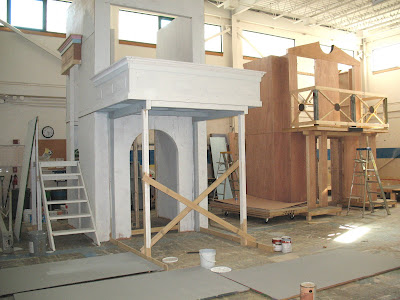 Funny...Forum carpentry progress. Lycus' house and Senex's house
And that the Planet Arlington World Playground backdrops are also in full swing (I should have final shots next week) 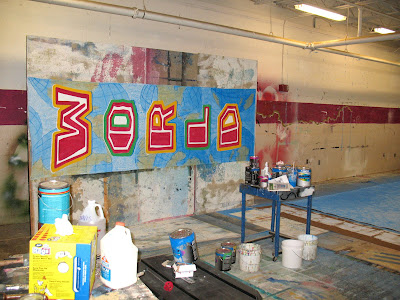 World Playground drop progress (Stage Right panel shown)
"World" is on its side because the shop ceiling is 11' tall, and the panel is 12' tall...
And Lastly, I have made a few more velvet paintings on the road to the Arts on Belmont art fair... 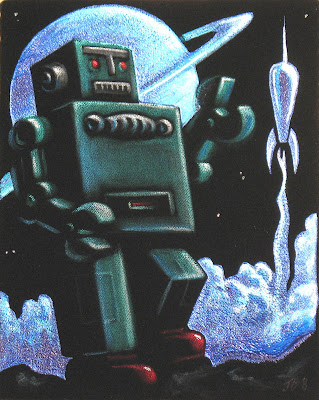 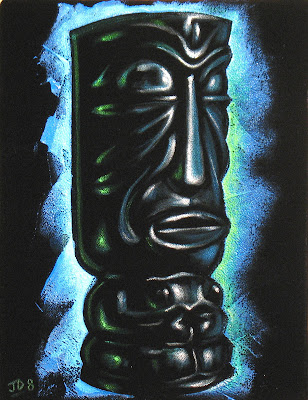 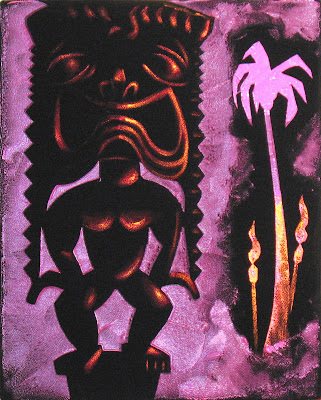 I'm having a really good time exploring black velvet as a painting surface. (let me just say again that it is very hard to get an idea of what these paintings look like "in the flesh" from these photos...my mother, a woman not given to hyperbole, described them as "lush") It really seems to combine all of the things I love about painting, and it has held my interest very well in the past week or so. Four paintings into this project and I am learning all sorts of neat tricks and getting a good feel for where I will want to go...I had a painting teacher, the late, great Al Loving who once said to me that "...the great thing about Art is that it asks you a question, once you try to answer that question it just leads you to other questions..." That is how I am feeling about these paintings. I am looking forward to going a bit larger, and perhaps less quickly once the art fairs are over...
No comments: 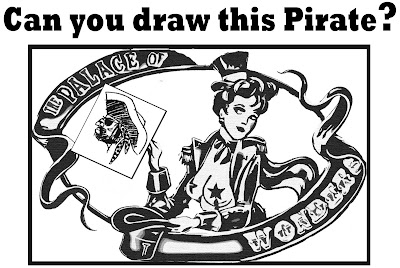 I hope you all are as excited as I am for this Sunday's Dr. Sketchy's...It promises to be a really great show...L'il Dutch is going to be debuting new material, and Sugar Ann Spice has a got a surprise or two in store as well...I hope that the Rev. Loveseat catches the spirit for this late night Sunday service....

In other news, this week saw the annual Yard Sale...a huge success and even quite profitable for some involved...start saving up your stuff to sell next year! (I'm talking to you, silver Christmas caribou)

I've stapled down and started to prime the Planet Arlington World Playground drops (remember those?) and will have lots of progress photos next time.

The other major development this week was of a more painterly nature. Ever have one of those painting moments where you made something and you think you have a whole new avenue open up? Well I had one of those moments this week. I have been agonizing over producing enough artwork for the Arts on Belmont in Adams Morgan (September 14th) (and I am also participating in the Barracks Row Oktoberfest the following week...September 27th) and I have had a hard time coming up with a reasonable game plan for producing enough work to fill the tent. Out of the blue, this little painting popped up: 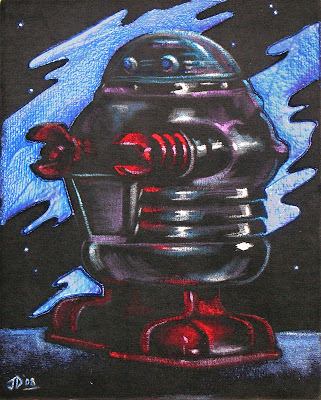 VELVET ROBOT 0001
Acrylic on Velvet, 8"x10"
What makes him so great is something that you wont be able to find on your computer screen...the background "clouds" were created using a stencil process, but using really thick blue metallic paint. The juxtaposition of this shiny (and hard to photograph) thick surface texture and the matte, light sucking darkness of the velvet really appeals to me. The fact that I have been painting really large velvet paintings all summer has really prepared me for this sort of painting, and the goopy stencil process is a great stand-in for my cut paper process that I love so dearly...Anyway, what I have planned is a whole slew of this sort of work over the next month which has got me really inspired and excited (lately I have had too much going on to be either of those things...)

Lastly, I am going to see Studio's production of Jerry Springer: the Opera tonight...I'll send along a full report for all of you poor souls that don't have $45 a ticket to shell out...(it will be much cheaper when Landless does it, I promise)
No comments:

The All Arlington Salon was a huge success. I am told that there was a record number of people in attendance at the Ellipse on Thursday night. Unfortunately, that was also the night that DC said good bye to Candy Keegan...she leaves for a cushy job in Buffalo NY, and we wish her all the best...she says she will keep up with here blog, so she will never be far away. Another record was set that night...I was able to get four people in the cab of my truck, a personal best.

Struck has now been Struck from the Warehouse. The Mermaid Misting tent backdrop is back in Baltimore, getting ready for its second year at the Virgin Festival (if anyone sees it this weekend, please send me your pictures! Last years photos were kinda... foggy)

So, enough of the past, let us look to the future! This Saturday the Evil Come Evil Go Go Show will be at the Palace of Wonders. I have been working hard to find a suitable backdrop for the undressed undead, and I hope that they like the cemetery portal I have made for them: 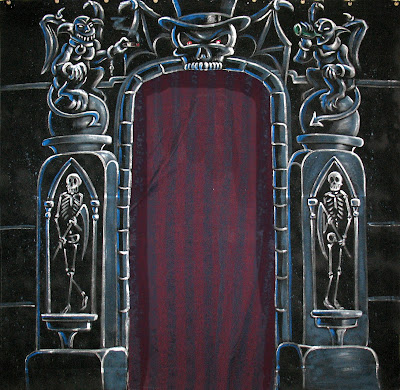 I have flameproofed the heck out of this thing...so someone better be playing with fire on Saturday night!

The other thing that has been occupying my time lately is, well, painting. I have been making an effort to get some new paintings started in order to have something to show in my tent on Adams Morgan Day (Sunday, September 14th) I decided I needed to start somewhere, so Monkeys are as good a place as any! 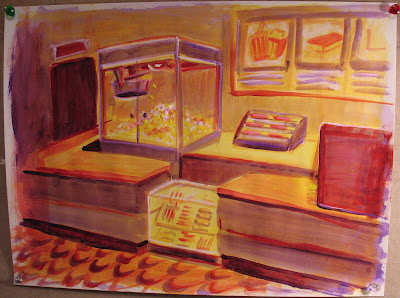 In order to get things going, I started (for a change) with the setting the monkeys would inhabit in the painting. I like the idea of monkeys going crazy in a movie concessions stand, so i did the watercolor above. 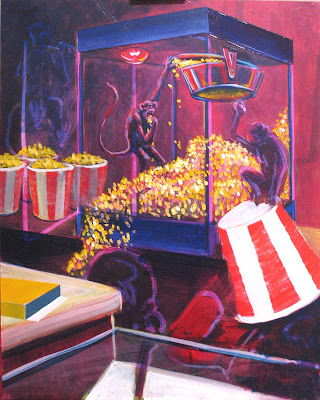 Here is the first refinement of that original idea. I decided that small monkeys terrorizing a poor usher was better closeup, so I tightened the focus of the composition...suddenly the picture became about the unholy union of Monkeys and Popcorn... Another change from my normal technique is that I am not cutting and pasting any paper so far...it has been a challenge for me to not use paper, because I find it makes the composition much more deliberate. But I am trying to embrace the idea that the picture can evolve during its making, instead of having such a rigid structure of cut paper...Here's a detail of the first (fleshed out) monkey: 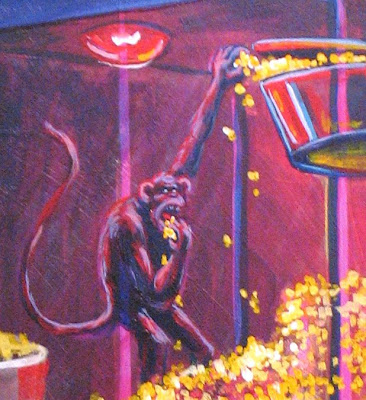 Lastly, I want to make sure you all know about the annual YARD SALE we are having this Sunday...You can get all of the deets Here at PetworthNEWS!
No comments:

As I alluded to in the previous post, the 2008-2009 "American Made" season for Landless Theatre Co. has just been announced! (I will probably be involved in each of these shows...and I am very excited about them all!) Get your Season ticket subscriptions today!