10 NECRONOMICON PAGES AND ONE VELVET BANANA

After a bit of back-and-forth Trixie and Monkey have settled on a design that works for everybody: 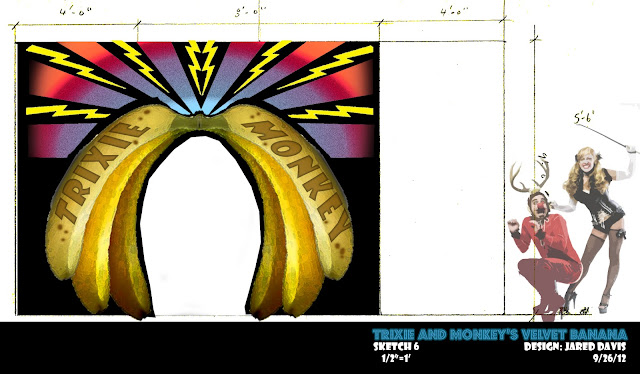 And I have started right away working on making the "Velvet Banana" a reality....here it is in the very early stages: 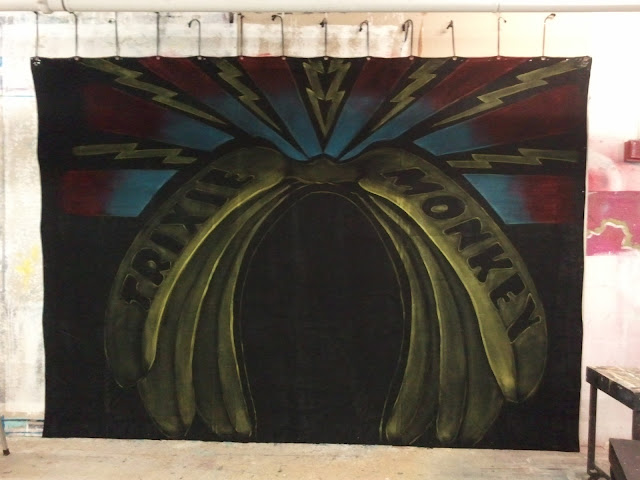 Now that the T&M backdrop has started, my energies have started focusing a tiny bit farther down the calendar. Specifically, Spooktacular XIII...in keeping with this years theme (American Horror Films) I have started working on the "giveaways" (the giveaways are artwork prizes that we have given away as rewards for the games that we devise specifically for the party...in the past they have been velvet portraits of Elvis, Villains, Christmas zombies, etc) This year I have decided to make my own NECRONOMICON! Which means that I have been making two pages every morning for the past week (10 pages complete thus far) I don't spend much more than an hour on each, and at this rate, I should be able to compete my goal of 40 by October 27. I have taken some crappy cell phone photos of them thus far just to give you an idea of what I am up to....all of them are 8"x10" on "aged" paper:


So, you'll just have to check back in next week for more exciting chapters of the Spooktacular Necronomicon!

The other thing that happened this week was some of this silliness: 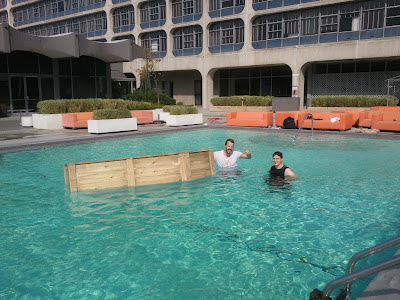 Landless Theater Company is having a fund raiser. You see, they are engaged in negotiations on getting their own space, and they cant just stop doing shows while they are homeless. So, they have decided to present XANADU at the FCAC (in Frederick MD) in order to keep people excited about LTC and perhaps make a tiny bit of money that will go towards getting the new space up and running. They came to me, and asked if I could design them a set for XANADU for as little money as possible. I scratched my head and came up with this: 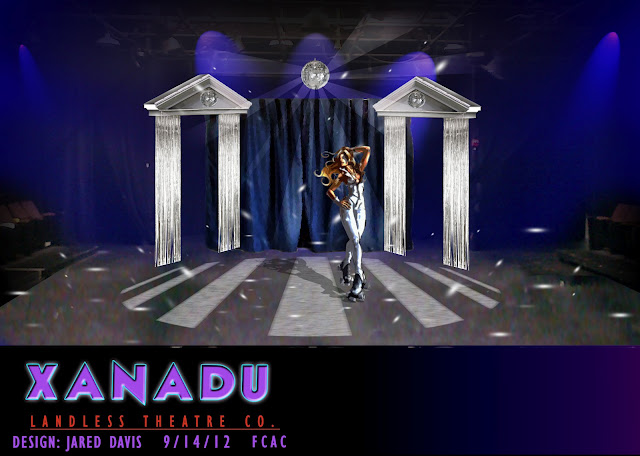 It consists of a simple painted floor, a set of blue curtains that I own, two pediments borrowed from Dominion stage's spring production of November, shimmer curtain, and disco balls. Total cost for the set as designed: Under $100. Opens October 12th.

I have made some revisions and improvements to the Velvet Banana set, (hopefully you will find this version more a-PEAL-ing! ouch!) and will begin to paint it later this week...of course, I will post photos as things progress... 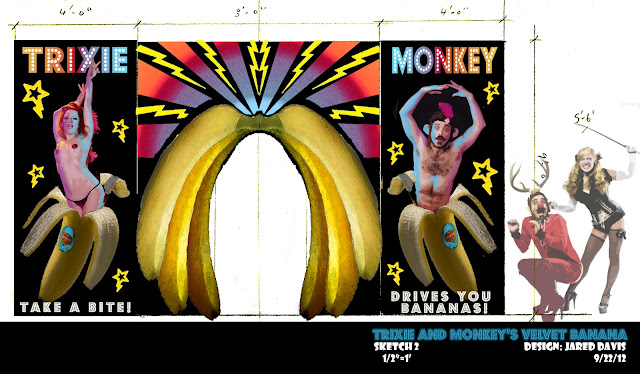 UPDATE: Trixie and Monkey have conferred and have asked to see some more sketches, without their visages at all...below is my latest stab at it: 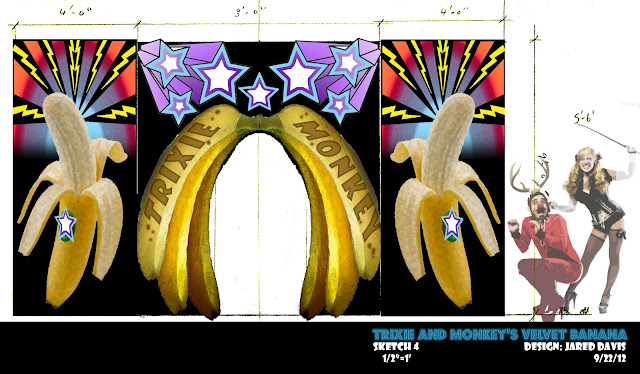 This week has mostly been a refining and revising of last weeks projects. (with the awesome exceptions of seeing a midnight showing of Iron Sky and seeing Rush in concert!)...oh, and it looks like I'll be designing Hexagon's show this year, and Landless' Xanadu...

Turns out that the Queen (of the Mardi Gras) no longer wants a portal for her event (there goes a half a day's work on a giant gold fairy down the drain) but wants the chandelier...but inverted thusly: 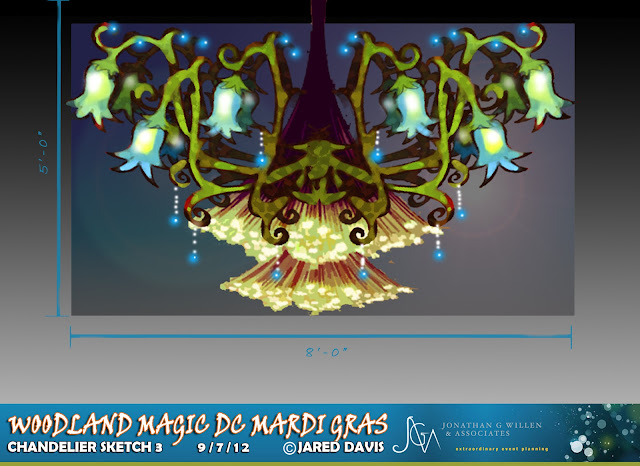 Also, she wants lots of changes to the floorplans, which is par for the course, but still more work for me...

Trixie also is stepping back from the idea of the portraits in the velvet banana...so, I have provided her with some alternatives, like a full sized (but less portrait specific) figure coming out of the banana (the below image is just an "example" sketch:

Lastly, I have been making strides to work on the backyard for the Halloween Party. I took detailed measurements of the backyard...It may have just hit me that I am designing an 80' stage in my backyard...again... 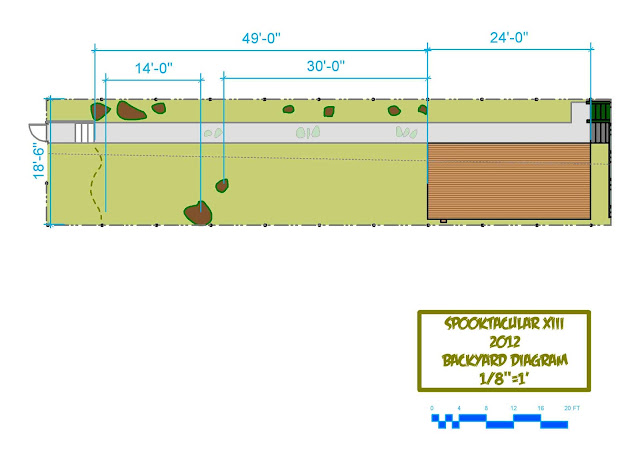 Three "First Sketches" projects due at the same time!

As advertised in the previous posting, I had a bunch of projects all going at the same time, and I didn't want to say anything about them until they were presented to the clients. As it turns out, they are all the "first sketch" phase...which means that they are rough around the edges, and are the hardest part of the project to complete (and I had 3 that were all due at the same time!)

The first project was Trixie and Monkey's "Velvet Banana" backdrop. They are taking their show to Australia, and want to have velvet backdrops painted specifically for this show. Of course, I will be painting these on velour, not velvet, but the "bad velvet painting" effect will be the same....Since this is a first draft, I did some photoshop "sketching" which means that I stole images directly from the Internet to create much of this photo (with extra special apologies to Rod North for using his wonderful portraits of T&M) Trixie has been reviewing these sketches and I should get feedback soon, since they leave for Oz sometime in October! 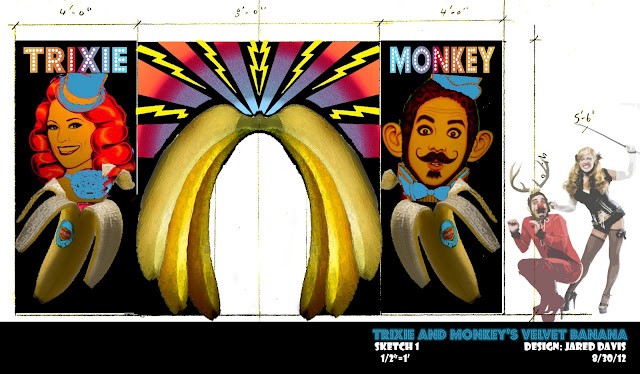 The next looming deadline has been getting the first sketches done for Dominion Stage's production of Avenue Q. This production does not open until early January, but because of the way the shop schedule has worked out, it will have to be built early (in October/November) and then stored in the shop over December...So, that means that the design needs to be complete by the end of the month!
The design is a minor departure from the way that other Ave Q productions are usually staged. In the traditional staging there are three houses in a straight line across the stage. I was hoping to add some visual interest (and functionality) by placing the houses on the "corner". (I realize that this makes little architectural sense for an "Avenue", but hey, puppets live here with real live people! AND lets not forget that Sesame Street seemed to take a "Z" shaped path...Mr. Hooper's store, Right Turn, long street with row houses where Oscar had his trash can, then take a left turn into a sorta blind alley where Big Bird and Snuffy would hang out...) Anyway, the functionality of this design lies in the fact that flats with the "interior" scenes can be slid in and out from the "alleys" created on either side of the green building....I know its confusing now, but it will become more clear in the next drawings. I presented this to the design team, and they were enthusiastic, and ready to see more drawings! 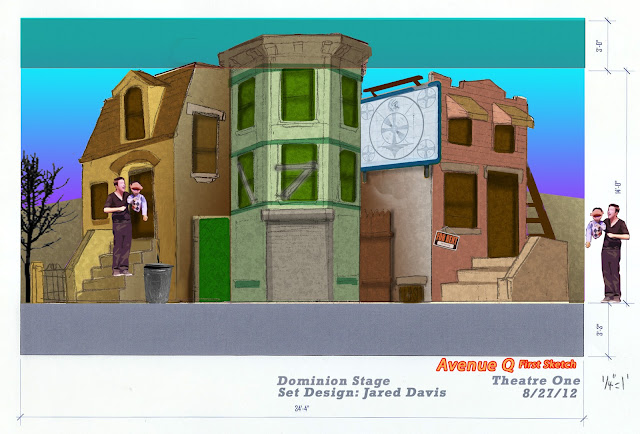 The last project is the most complex, and the one that opens the latest...its for the DC Mardi Gras at the Washington Hilton. Basically, they are having a huge blowout, and they need scenery designed around a theme. Their theme was "Woodland Magic"...so, I've sent along first sketches of three of the requested elements: Stage Portal, Turntables and a custom Chandelier...

The Stage portal was perhaps the easiest one to generate an idea for, but the most difficult to make look good (or at least not looking like a tramp stamp). Here is a first stab at the idea directly from my sketchbook: 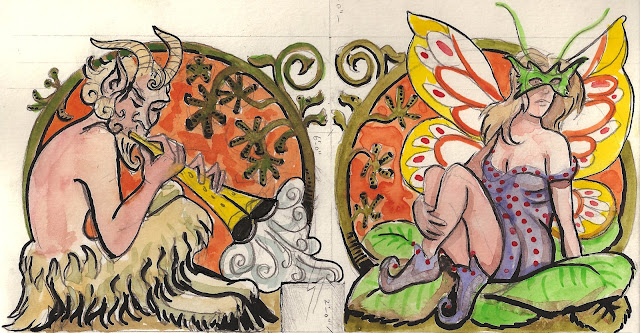 Eventually, I settled on the idea of having two golden fairies flanking the stage. The fairy would be low relief, painted gold. The wings would be translucent fabric with lights sewn in. The background would be a sculpted woodsy root and flower frame with fabric (in all likelihood spandex) stretched behind it so that it could be lit with different colors as the night went on.

Here is a detail of the Fairy design: 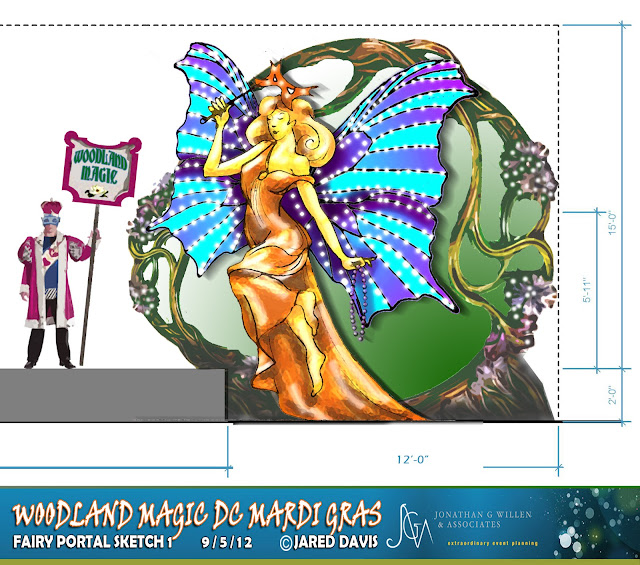 The other element was the custom chandelier. This was really quite tricky....and the first sketch was a "swing and a miss"...I was trying to continue the forest theme, but decided to make the chandelier more "classy" than other parts of the show...you know, mimicking the way chandeliers normally look, silver and gold etc...but the client did not like it, I think, because it was not "Mardi Gras" enough: 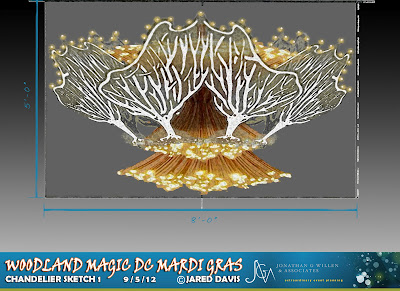 So, in desperation, I whipped up this alternative with more "plants and bluebells"....I am waiting to hear what the client thinks of everything... 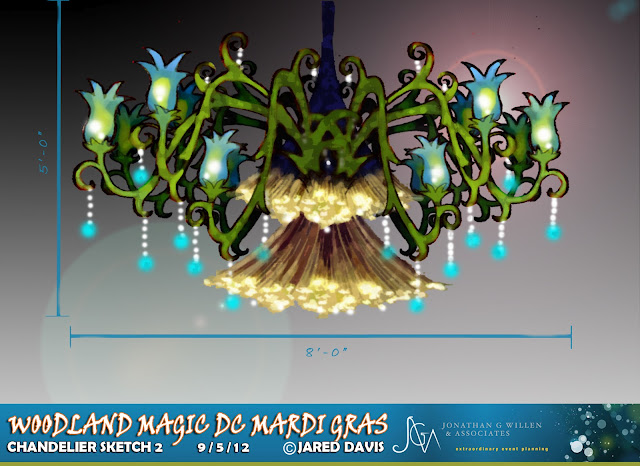