DIAMOND DEAD NYC IS IN THE HISTORY BOOKS

DIAMOND DEAD in NYC was a huge success! Thanks to everyone who made the trip, and special thanks to all of the NYC locals that came out! We got some decent audiences, a marriage proposal, and even some scuttlebutt about taking the show to the next level!
Hyreviews.com does a nice review of the DD NYC performance...and you can even get a sneak peek at the opening number of the show with this (admittedly kinda low-fi) YouTube video.

I won't bore you with the flurry of photos that are circulating around Facebook, but I will give you a peek at the setup that we had at Dixon place...mostly because this is the fourth configuration of DIAMOND DEAD in as many venues...which is really a testament to how versatile the pipe and drape setup can be! 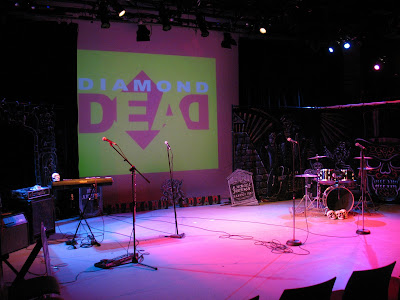 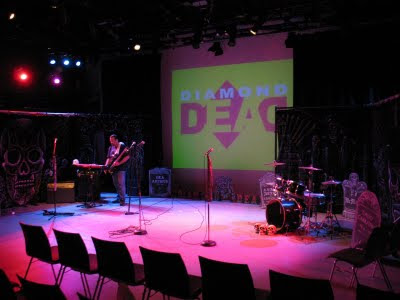 Jason tunes his bass just before opening night...
In local news, DC Theater Scene mentions my designs in 3 of their 14 favorite musicals this past year...(Forum, Follies, Walmartopia) and big kudos for Karissa Swanigan who was named musical theater performer of the year!

Almost immediately upon touching DC soil I found myself setting up for the auditions for Hope Operas...(I also caught the Bark Victory show on Sunday) I am exited to see these serials every Monday in October.

Speaking of October, we had the second production meeting for Spooktacular X...good news and bad news there...Bad news: Adult ball pit rentals don't exist and would be outrageously expensive to build...Good news: we came up with an even better idea!

Even with all of the NYC excitement, I was able to make progress on the final painting for Gator Wrestlin'... 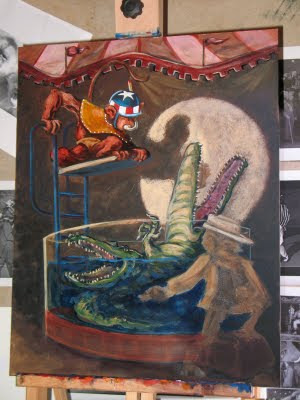 Gator Wrestlin' in progress
This has been a really fun painting to work on so far. I haven't blocked in Floyd yet, or really started to work on the intense lighting. I have mostly been solidifying the composition, and trying to preserve the feel from the first sketch. I am struggling with the paradox of trying to make the paint look labored over in an accidental way. That is, I have been keeping the speed up when applying the paint, while also trying to keep very accurate drafting...I hope that working this way will keep a "seeing the straw" carnival feel, without looking like a depressing critique of gypsy aesthetics...
No comments:

DIAMOND DEAD OPENS IN NYC THIS FRIDAY!!! AND GATOR WRESTLIN'!! 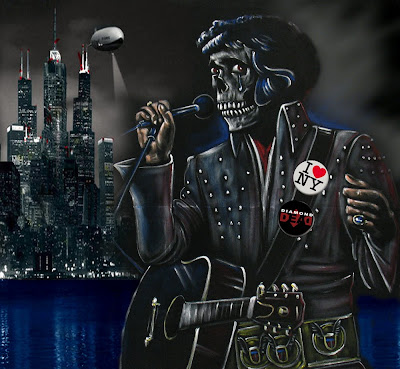 Skulvis loves NYC and DIAMOND DEAD
There has been a lot of press coverage for the FringeNYC DIAMOND DEAD show already...mostly on websites like DeadCentral.com, IMDB, Shocktillyoudrop.com, Fangoria, Bloodydisgusting.com, Newgothcity.com, just to name a few...But you didn't need convincing...True Diamond Dead fans have already gotten their rotted corpses up to NYC and are camped outside Dixon Place as we speak...

Other than the many promotional engagements around town (everything from being part of the "Good Morning America" sidewalk crowd, to sit-in jam sessions on "Variety Power Hour"...) here are the times you can see them at Dixion Place as part of the FringeNYC festival: 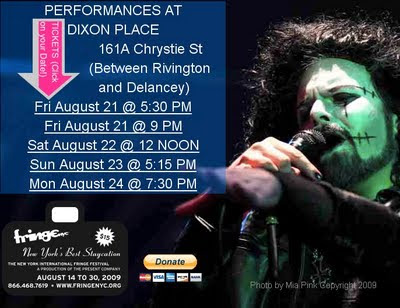 See you in the BIG APPLE!

In, er, local news, I have started the second in the fledgling series of Daredevil Monkey paintings yesterday. It is in the early stages of development, but I think that the watercolor sketch I made is good enough to let you loyal readers of BTT get a sneak peek: 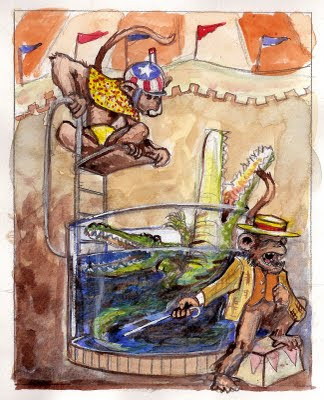 Gator Wrestlin' Sketch
Watercolor on Sketchbook paper, 6"x7 1/2"
I am hopeful about this series, because it really seems to touch a nerve for me. I guess its all of the cartoons when I was a kid, but I like the idea of these two monkeys out there trying to make a buck by doing stunts...Fearless and Floyd are their working names (I also like Ace and Orville) but I don't think I will actually ever name them in the final paintings...

I have started the painting for Gator Wrestlin' and it is going quite well. One of the big changes to the composition that is emerging so far is that I have put a spotlight on Fearless, that is casting a shadow of him and the gator on the tent in the background. This will also turn the lights down in the painting, which will make the whole thing a bit more theatrical, and increase the contrast. Contrast is good, because I think I may have discovered (after all this time) what kind of painter I am...I do very well in a velvet setting. That is, I seem to paint best when the lights have been turned down very low, and all I am doing is painting with the highlights...like a velvet painting. Of course, I'll probably change my mind soon enough (because, really, the watercolor above is pretty successful, and it's not as contrasty as a velvet...) once I get some more monkeys-in-the-half-dark out of my system...
1 comment:

That's right folks, the kid is back! And he's paintin' monkeys! Its been a long time coming (LEECH!, the last formal painting, excluding the cut luan installation I created for Artomatic, was finished in December of 2008!) and it feels great to get the little buggers out of my head on on to the canvas. Without further adieu, I present the first in a series (I hope) of new monkey paintings: 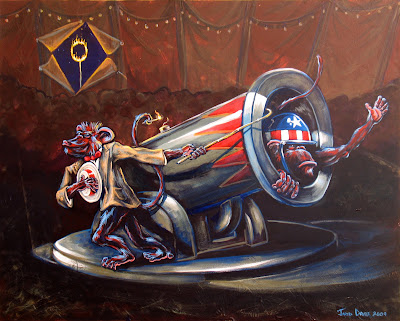 CANNONBALL!
Acrylic on Board, 16"x20"
(as always, click on the photo for larger view)
I think I will be working on a few more of these daredevil monkeys in the near future...watch this space...

The other events of this past week largely revolve around Landless' announcement of the 2009-2010 season: "Season of the Damned"

Of course this announcement comes directly on the heels of the FringeNYC production of Diamond Dead! 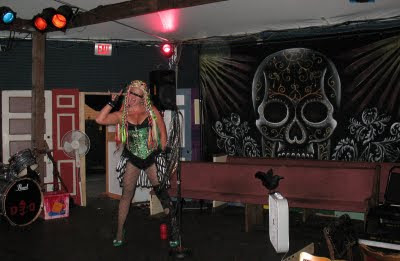 If Aria is this stoked about performing in a tent, then I cant wait to see them in NYC!!!!
Oh, and check out this video...it may be instrumental in planning your FringeNYC itinerary...
But what the announcement of "season of the damned" really means is that we are actually going to be doing these shows...so I have made myself useful this week and I have made scale drawings of the DCAC space, and some accompanying "stitched" photos to use for designing purposes: 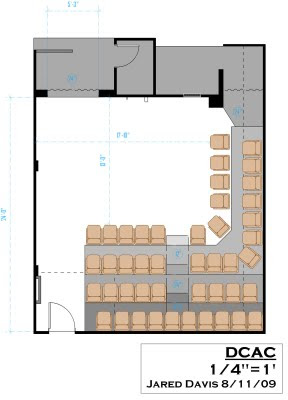 Of course all of this preparation is really for EVIL DEAD the MUSICAL...which I sent along a preliminary sketch of this week: 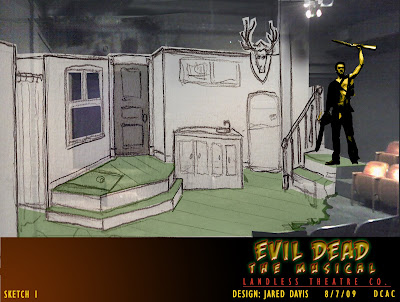 Boy this was an active week! I should also mention that we saw the opening of a new wine bar on 10th street called Room 11, we are all very excited about it! 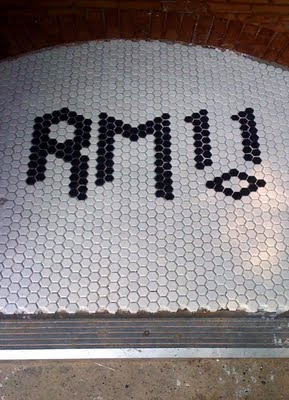 When I was not swilling wine this week, it seemed like I was at a production meeting...the first one was for the upcoming Dominion Stage show, REEFER MADNESS 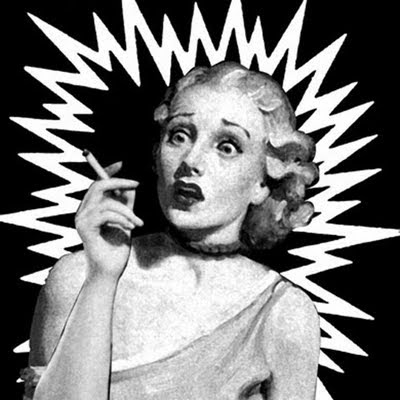 "What? Jared is designing the set for REEFER MADNESS? I wonder if I can get invited to one of his 'research' parties..."

The other production meeting this week was for SPOOKTACULAR X. Those of you who have been around the block a few times know that Artbyjared Labs (Team Spooktacular? whatever we call ourselves...) throw a kick ass Halloween party every year...well we pinned down a theme for this years shin-dig: X Marks the Spot! "Wha?" you may be saying to yourself...Well, this is our tenth Halloween party in DC...so we decided to celebrate the decade by using the roman numeral X as our jumping off point...so start thinking about those costumes...keep an eye out for anything that sorta says "treasure hunter, sleuth, pirate, or squirrel..." (but, like an evil squirrel...)
2 comments:

Sorry kids, lots going on, but not much to show for it this week...Still in evil planning mode... 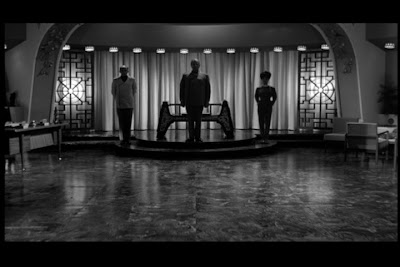 Because of the delays that US Airways created this weekend, I had a few bonus days with the in-laws...so, lots of home improvement projects, but not many pictures to show for it.

I suppose that this is as good a time as any to (quietly) announce that Landless Theatre Company has secured the rights and is 80% certain that their next show will be....EVIL DEAD THE MUSICAL!!!! (woot!) So, clear you entire October calendar, because I am declaring October, Scenery Appreciation Month!!!
No comments: