Jared profiled in Examiner and "Hey Look, I built a monster easel!"

The big news this week is that I was profiled by the Examiner. Its a very well written piece of journalism (deftly executed by Stephen Mack) because he was able to take a 45 minute rambling conversation and distill it down into "just who the hell does Jared think he is?"

I have added the full text of the article below, but if you would like to read it natively, here is your link. 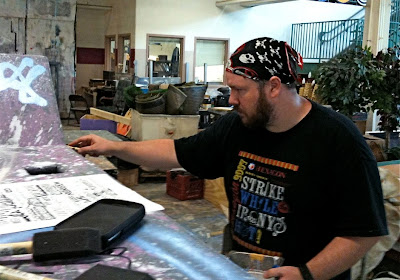 For many artists in the area, hanging a painting next to works by local heavyweights like Scott G. Brooks, Matt Sesow and Dana Ellyn would be a humbling experience. But at the exhibition opening for the space-themed Countdown to Yuri’s Night at Artisphere in March, Monkey Moonshot, painted by the show’s curator Jared Davis, didn’t seem at all out of place. Davis’ work popped up again two months later at the G40 Art Summit, with four Inferno-themed paintings distinguished by the physical brushwork that has become his style. If the quality of his canvas painting is surprising, it’s because, with all the other hats Davis wears, it’s easy to miss the fact that painting is his first love.

“I actually cannot remember a time when I didn’t want to be an artist,” Davis says. “I was a little art nerd as a kid. I was way into abstract expressionism when I was 12 or 13.” It’s doubtful if that child would have anticipated the grinning monkeys and other comically grotesque characters, usually up to no good, that Davis paints today.

But where his passions all come together is in the annual events he coordinates. The Yuri’s Night exhibition was a precursor to a one-night celebration featuring a dance party, burlesque revue, and a film screening with commentary in the style of Mystery Science Theater 3000. Davis and his wife Kate throw a themed Halloween party at their house every year—they were married at the 2005 edition—and in January they launched the first annual Elvis’ Birthday Fight Club, which Davis emceed as the King himself, at Warehouse Theatre. In addition to creating the shows, building the sets, and performing, Davis is always searching for inventive ways for the audience to interact with the production. One Halloween party featured a death ray, which visitors could operate themselves using a jury-rigged laser tag system and make a quick getaway using the slides on either side.

During the day, Davis manages the scene shop at Arlington County’s Gunston Arts Center. The large workshop gives him the opportunity to do what he does best: “paint really big.” He has designed sets there for theater companies such as Landless Theatre, Dominion Stage, and The Arlington Players, as well as for his own events. “I actually feel kind of obligated to make things that utilize the space that I’m given,” he says. “I would feel really weird if I went back home and started painting miniatures on nutshells.”

When Davis came to Washington in 1999, he was immediately attracted to the vibrant theater scene, eventually designing sets for the bawdy Lobster Boy Revue. This led to an association with the local burlesque scene that continues to this day. Nearly all of his events feature a burlesque performance, or at least contain a burlesque theme. “There’s a certain irreverence that’s inherent in burlesque,” Davis says, “And that translates into the artwork; that translates into the type of events that we put on. We’re not going to take ourselves too seriously.”

Citing critic Dave Hickey, Davis says his first priority as an artist is to get his friends excited in what he’s doing, and he plans to keep the party going as long as they keep responding to it. Recalling when Lobster Boy performer Lucas Zarwell put away the lobster costume and retired to a more staid life, Davis says he has no intention of letting maturity get the better of him. “I can't quit,” he says. “There’s no quitting.”

Trying to add a fourth yearly event to fill the open slot in the summer, Davis grimaces when he thinks about the roadblocks in the way, from finding a venue to figuring out how to fit enough visitors in to cover expenses. Still, the logistical headaches are not enough to quell his enthusiasm as he imagines possibilities for new performances, new contrivances, new ways to get his friends excited. And if the general public enjoys interactive capsule rides and life-sized Rock ‘Em Sock ‘Em dinosaurs too, “That’s gravy.”


The other news is simply that I built a giant easel in the shop. Really, its just a 12 foot high and 20 foot wide.... 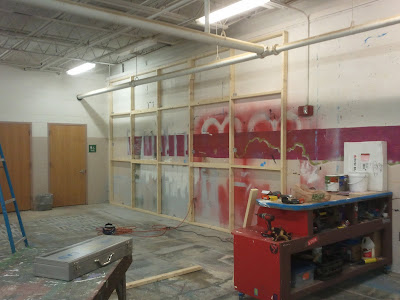 Stud Wall...then that gets skinned with... 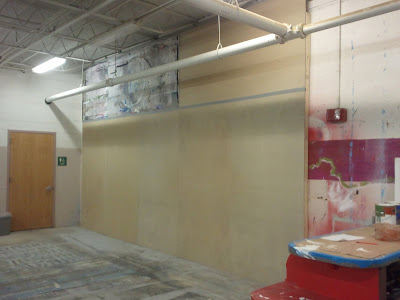 Homasote (a compressed newspaper sheet that is used for dampening sound in flooring) so that you have a solid surface to staple stuff to. It is a great improvement over the last easel we had in the shop, which was the Spooktacular IX King Kong photo op recycled...look forward to seeing stuff stapled to this bad-boy soon!
No comments:

Hunting Tigers With a Color Pencil

Another week of big changes behind the scenes at Art by Jared...another week where I don't want to talk too much about those changes...But this time I actually have some art to show. Well, really, its just a copy of an old master painting. You see, I have gotten into one of those "reinvent the wheel" moods where I try to reinvent my entire working method as a painter. These moods come and go, and sometimes they produce some amazing breakthroughs for me. When this happens I find it instructive to make copies of artwork that I feel is dealing with similar issues that I want to tackle in my own work. So, this past week I have been working on a color pencil sketch of Peter Paul Rubens The Tiger Hunt. 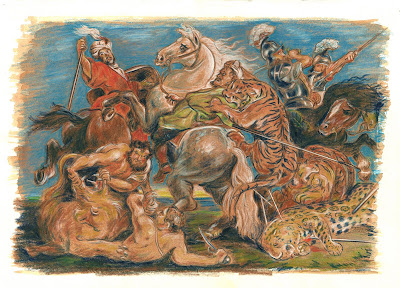 After Rubens' the Tiger Hunt (c. 1616)
Color Pencil on ink washed paper, 12"x10"
I would like to be able to create just such an energetic and roiling composition while maintaining such precision pertaining to color, composition and theme. Rubens is truly one of the great painters because everything he does has a level of control that works on multiple levels. It was a bit frustrating using color pencil to create this drawing because as a painter I can see where paint would allow me to easily do some of the things that Rubens does instead of the relatively clunky limitations of color pencil. For example, I wasn't using any black, as is my normal method, but it is very difficult to get rich dark tones by combining indigo blue and burnt umber color pencils because either the waxiness of the pencil would clog up the paper, or the hardness of the pencil would dig into (and rip away) the first layer of paper...this would not be an issue in paint.
I feel that this drawing will be a good one to have kicking around the studio for the rest of the summer because it illustrates the need for good composition, and that there are a few tricks that the old masters knew that I could be using more effectively (once I get back to painting monkeys!)
No comments:

Warning: Pet photo for no reason! 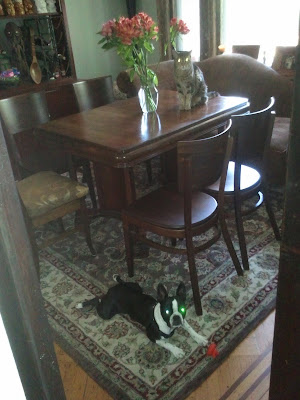 Sookie and Empeno both demonically possessed...
Sometimes things just move in slow motion...that is, you are working and getting stuff done, but you have little that is physical to show for it. Well, these last few weeks have been a bit like that. For example, this week a writers meeting was called for a project that I was working on that I was reluctant to share on this blog because I didn't want to jinx it. Well, the result of that meeting has dictated the direction of several of the big projects that ArtbyJared has brewing throughout the year...in fact, it has given birth to the (potential) fourth event of the year...lots of work, and big decisions, but not much paint on canvas...anyway, I am hoping to remedy that in the next few weeks now that some of the big decisions have been made. (we even moved forward with Yuri's Night 2012 this week!)

This week was the Opening for Rock Bottom at Landless...unfortunately, the set photos I have are totally lame because I was not able to stick around while they rehearsed, so what you see is the set literally plopped down after being taken off the truck. 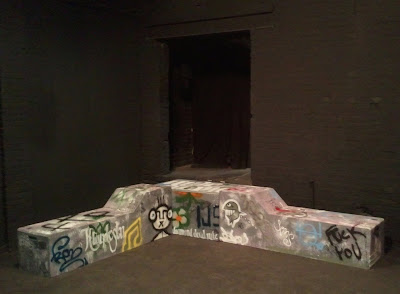 The cool part about this set was that I got to look up graffiti from Amsterdam, which is a lot more calligraphic (and in English) than you would think...go see the show, and see how many dutch sayings you can pick out! Proost!
No comments:

It's a Landless Summer...

So, I totally threw out my back on Sunday. Which really puts a damper on my general artistic well being...so this is as good a time as any to let you know about some of the shows I am working on this summer for Landless Theatre Company...
First Up is part of the NYC FRINGE FESTIVAL. It was part of this winter's mashup fest...its a mashup of Glee and Scream...Because its a fringe show the set will simply consist of a backdrop (which I ordered from Rosebrand today...why Rosebrand you ask? Well, one of the joys of NYC Fringe is that everything has to have a NYC fireproofing certificate...one of the only places that sews drops and has the NYC Cert is Rosebrand...sheesh!) So, I prepared some backdrop ideas for the director: 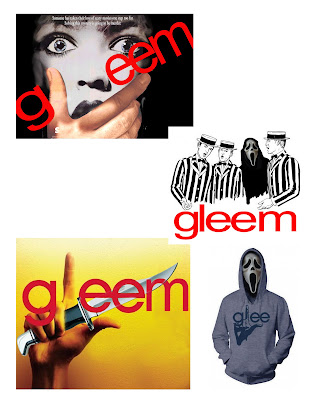 As you can see, I didn't notice at the time that the show was called "Gleeam" and not "Gleem"....anyway, here is the directors final decision: 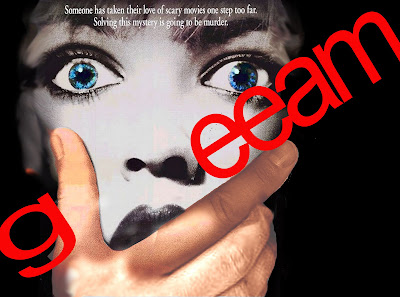 I should start working on this drop later on this month...so clear your schedule to go to NYC in early August!

The other two Landless offerings this summer are Captain Freedom (which I have minimal involvement in) and Rock Bottom (which I will be recycling/repurposing most of the B-team set for) Here is the info for both shows:

Landless ROCKS the month of July! Check out our two great shows below.

Captain Freedom
Presented as part of the Capital Fringe Festival

Captain Freedom has saved the world countless time and looked fantastic doing it, but not even a superhero is recession-proof. A super-heroic comedy from Landless Theatre (Diamond Dead, Carrie Potter) and humorist G. Xavier Robillard (alldaycoffee.net).


For tickets and information visit the Landless website at: www.landlesstheatrecompany.org!

For tickets and information visit the Rock Bottom website at: rockbottommusical.com!

The first production of the new rock musical based on the novel by Michael Shilling that Houston Press calls "the greatest rock'n'roll novel ever written!" A darkly comic journey through the last day in the life of a rock band as it crashes and burns. From the team that created DIAMOND DEAD (winner of the 2008 Best Musical Pick of the Capital Fringe) and PRESIDENT HARDING IS A ROCK STAR (Washington Post Editor's Pick).

****EXPLICIT LANGUAGE AND GRAPHIC SEXUAL SITUATIONS, NOT RECOMMENDED FOR AUDIENCES UNDER 18 ****