Happy New Year! With the new year comes a new puppy...the yet unnamed puppy was a gift from Ellen and Hal and is currently the apple of KT's eye (like the cat, I have had my reservations, but will eventually weaken...) 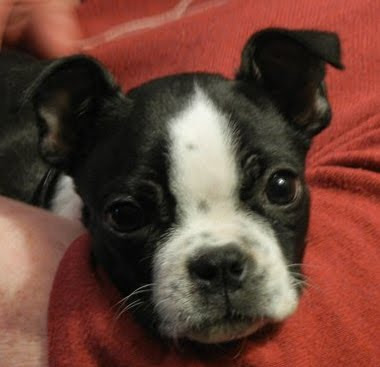 What's my name?
And as long as I have you here...BUY YOUR TICKETS TO NEXT WEEK'S ELVIS' BIRTHDAY FIGHT CLUB TODAY (SAVE $5!) GO TO WWW.FIGHTCLUBSHOW.COM
No comments:

Jeez, I haven't posted anything in a month! Well, better late than never! I guess it has been the cruise ship mentality that has made me so lackadaisical in my posting regime...Anyway, just wanted to hip y'all to the two big events coming up...

First, you should take advantage of Landless Theatre Company's season subscription offer (Subscribe and save $25!). They are starting their season a tad late this year, but are really packing a punch with back to back shows! Jared will be designing the scenery for Dr. Horribles Sing-along Blog (DC Premiere!) as well as B-Team (written by one of the writers of Showtime's Weeds)...

Sitting home with no gifts for your family and friends? Passed the Amazon.com shipping deadline?

In addition, the season also includes:


The other big news, (which you will be hearing lots more of once we get past all of these pesky holidays...) is the advance ticket sales for Elvis' Birthday Fight Club:

On Saturday, January 8, 2011 - what would have been the King of Rock n' Roll's 76th birthday -- ABJ and L'il Dutch Burlesque thrown down with a raucous show: Elvis' Birthday Fight Club.

Hosted by "Elvis" and DC's newest femme-cee Kittie Glitter, the event pits old school heroes and subversive villains against each other in FIVE blistering rounds, Elvis' Birthday Fight Club will make good on the King's request for "a little less conversation...a little more action." Between bouts, DC's burlesque entertainers L'il Dutch, Reverend Valentine and Ouioui Nonnon will keep the crowd all shook up. Audience members will also have the chance to flex their muscles with an Elvis tria contest over-seen by the King, himself.

Preliminary match-ups include light and middle-weight fighters from DC's neo-vaudeville, burlesque and alternative art scenes, including Swami Yomahmi, Lucrezia Blozia and introducing David Tasselhoff. Watch as they duke it out in ridiculous home-grown costumes as characters ranging from fantasy (box robot anyone?), to animals (yes, we mean cock fight) to historic figures (Four Score and...).

About ABJ Productions ABJ productions is a subsidiary of Art By Jared and Jared himself. Jared is an artist and set designer who loves to party. He and Kate Taylor Davis produce off-beat, memorable art events around the DC-area. Most notably, they hold Countdown to Yuri's Night each April to celebrate the first human space flight. Learn more about Jared and upcoming events at www.artbyjared.com.


About L'il Dutch Burlesque L'il Dutch Burlesque, founded by DC's own L'il Dutch, provides alternative, high-energy "salty sweet" burlesque and variety entertainment to the Nation's Capital and beyond - including the acclaimed Dutch Oven and Capital Tassels & Tease burlesque shows. L'il Dutch is a noted burlesque performer and producer, responsible for the Obama Wonderama Inauguration spectacular and is also co-organizer of The Hukilau, the East Coast's largest tiki event. Along with ABJ, she too loves to party. Learn more about L'il Dutch and upcoming events at www.lildutch.com