This has been a week of getting my thoughts down onto paper (or digital format...) so unfortunately, all I have to show for it is some sketches....which would spoil your enjoyment of the final product, so I simply leave you with this:

No art this week, just another funeral...

Sorry about not posting during my usual schedule this week. I was in Manlius, New York (near Syracuse) attending the funeral of my Grandmother, Eileen Bird. You local DC area folks might be interested to know that she was originally from Takoma Park Maryland, and courted my grandfather during WWII in the DC area (Gramps was at Annapolis) The obituary follows:

Eileen W. Bird June 19, 2011 Eileen W. Bird, 86, of Manlius, passed away Sunday. Born in Washington, DC, she was a graduate of Montgomery Blair High School. She was a volunteer with numerous organizations, including Francis House, where she was well known for cooking weekly meals for the staff, residents and their families; Manlius Historical Society and a founding member of its Herb Club; Literacy Volunteers and DoCorp Literacy Program in Syracuse; and FISH (Friends in Service Here). She enjoyed sewing, painting watercolors, and planting and nurturing flowers and plants. After years of traveling while her husband was serving in the Navy, she loved her home in the Central New York area and will be remembered as a loving and outstanding wife and mother. She was predeceased by her daughter, Robin, and her two brothers, Edward and Joseph Wilson. She is survived by her husband of 68 years, Robert "Dick" Bird; five daughters, Carolyn (Clark) Davis, Barbara (Michael) Luxenberg, Roberta Cagle, Lynn Thomas and Wendy (Tom) Beames; one brother, Henry Wilson; nine grandchildren; and nine great-grandchildren. Funeral Services: 10 a.m. Wednesday at St. Ann's Church, 104 Academy St., Manlius. Burial will follow in Manlius Village Cemetery. In lieu of flowers, contributions may be made to Francis House, 108 Michaels Ave., Syracuse NY 13208.
No comments:

This week I was able to get some first sketches done for the Imagination Stage Open House in September. They are really intended to start the conversation about the theme and function of the open house, but they do a good job of being a representation of what I hope the final product will be too... 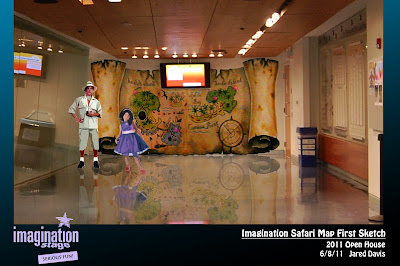 The idea is that the kids will start in the lobby and get instructions about how to find Doctor Doolittle, who is lost...Each room will then correspond to an activity themed on the next seasons show... 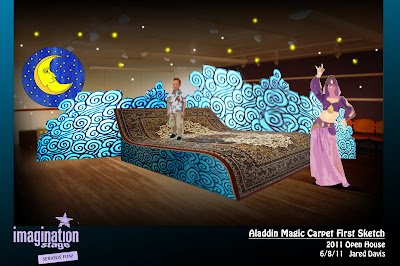 A flying carpet for Aladdin... 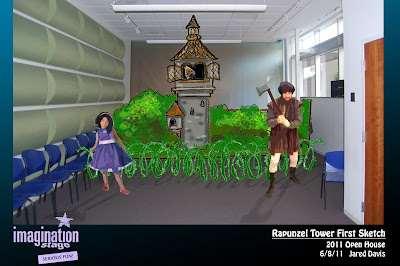 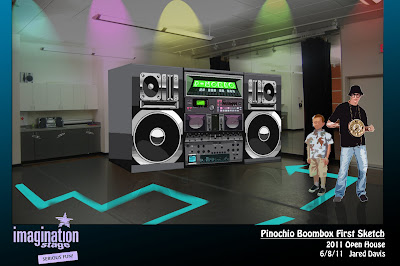 They will learn to dance in the P-Nokio room (P-Nokio is a retelling of Pinocchio in a hip hop style...hence the boombox) 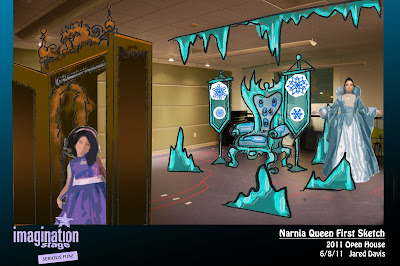 Their final stop will be the Lion, Witch and the Wardrobe room, where the ice queen has been keeping Dr. Doolittle...
No comments:

Some greatest hits from the hiatus

As promised, here are some of the greatest hits from the hiatus of the last three months... 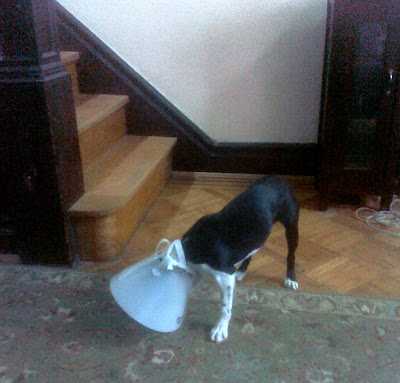 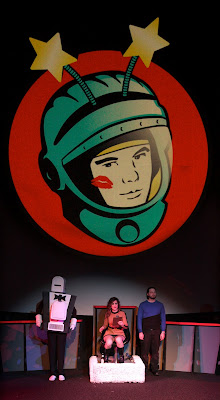 The set for Yuri's Night in the Dome, with Capt. Ballcrusher, #2 and Drinkbot...a full accounting of the Countdown To Yuri's Night experience can be had at www.outofthisworldparty.com 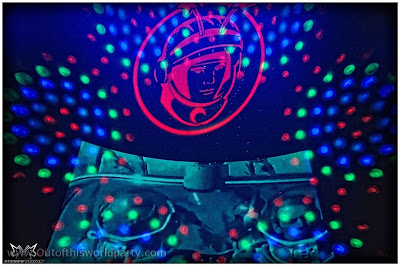 The Dome lit up during the Atomic Mosquitos preshow set. 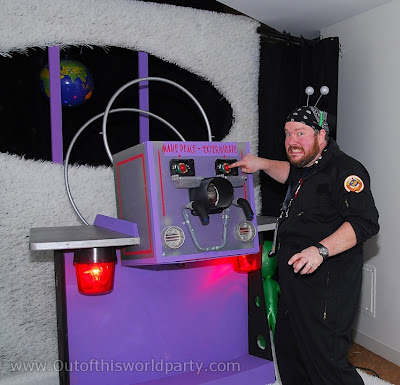 the Photo Op for Yuri's Night...Oddly, there are few photos of this... 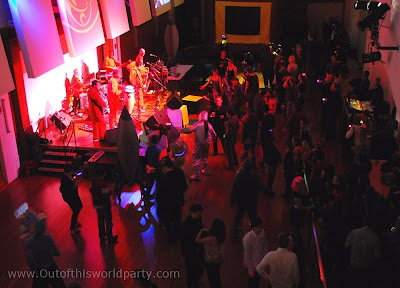 The Artisphere Ballroom with Eastern Standard Time skankin' it up! 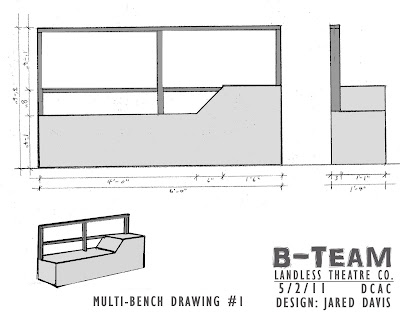 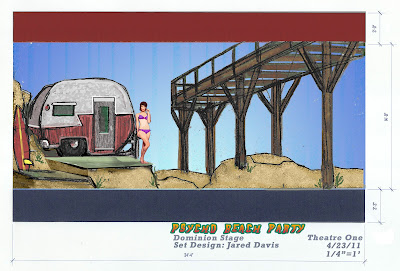 The Set Design for Psycho Beach Party (BTW, Scenery Appreciation Nites for both B-Team and Psycho Beach party are June 17 and 18th respectively) 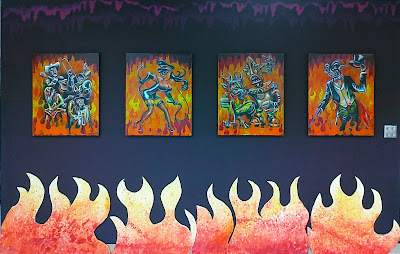 My wall at the G40...Its part of the stencil show...I did my best to do very thick stencils on the paintings of the flames and stalactites, which isn't really what the other kids were doing...you only have one week left to see this fantastic show...info HERE 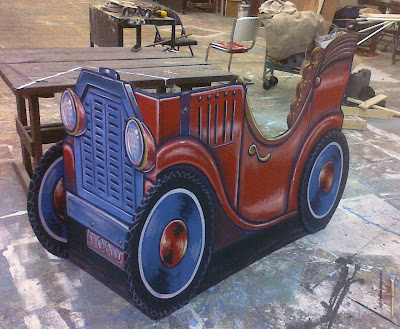 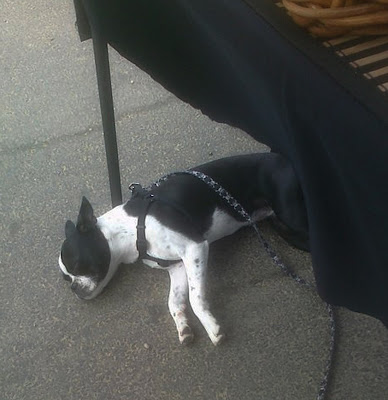 A very tired Sookie at the Marcatus festival at Yards Park...
No comments:

So, I know that a couple of you loyal BTT readers have been asking why I haven't posted any new stuff on the blog since March 10th...Well, I guess you could say I was in mourning. You see, on March 15th my wife Kate's Father, Hal Taylor, passed away from pancreatic cancer. It was sudden (he was fine at Christmas) and it came as a real shock to us all. The weeks following his death were filled with funeral stuff, but the more pressing issue was the impending Countdown to Yuri's Night at the Artisphere. So, I got busy, and started to let the blog slip away...after Yuri's Night other projects started to become more and more pressing (Spaying Sookie, the Yuri's Night thank you BBQ, Touring the Dupont Underground, Production meetings and design of Psycho Beach Party, C2YN Artists talkback, Deinstallation of C2YN, Painting for the G4o, Installing G40, Build B-Team, Load B-Team in, Open B-Team, Final Build for Psycho Beach Party, Load in Psycho Beach Party, Building a 12'x24' deck in the back yard, Deck Christening BBQ, Opening of Psycho Beach Party, Building and Painting the Imagination Stage Mr. Toad Car and Marcatus at Yards Park...) All in all, I really think that I stopped logging all of my artistic activity because, in some sort of way I was avoiding talking about Hal's Death...making a record of the trivia of my life seemed less important at the time. But now that things are somewhat calmer, I think that may have been the wrong approach. Perhaps our lives are made of such mundane stuff, and the act of sharing it is one of the only ways we have to comfort each other...a way of letting people know, "hey, I'm still here"...So, loyal readers, I'm still here. Makin' stuff, painting things and trying my darnedest to get you to come see those things I made. Hal was a passionate musician (saxophone) so he would probably agree that sharing your passion for the art you make is one of the greatest contributions you can make to this world...So as a tribute to his memory, you can expect to see more of this blog in the future!
2 comments: