I know that I was talkin' all scared about how I didn't have anything ready for Artomatic last week...well, turns out that I made it in the nick of time... 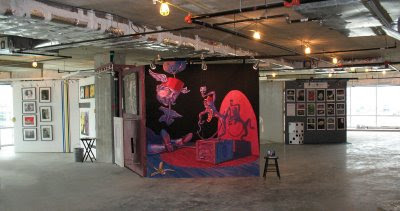 Jared's Artomatic space with Hurdi Gurdi installed, as seen from 8th floor elevators.
Instead of trying to crank out a bunch of smaller pictures, I concentrated on making one large piece. It's actually five separate pieces of luan, that have been screwed to the 8'x8' plywood wall provided by artomatic. 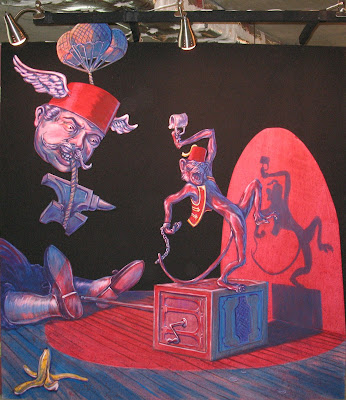 Hurdi Gurdy
Acrylic on luan (five pieces) 8'x8'
While considering what to do at Artomatic, I came to the conclusion that it was one of the best venues for experimentation that a painter in DC is likely to have. Which means that I was given an opportunity to do something outlandish and risky. Seizing that opportunity meant making something that was not necessarily commercially viable and even something that was a bit ugly. In the end, I decided that I would make something that would be informed by my work in theater (using theatrical scale, as well as materials) as well as my work as a painter (painterliness and pictorial narrative) because that is exactly the type of work I have been striving to make lately. Usually, I am trying to shoehorn painterliness into my scenic designs...this time I wanted to shoehorn my scenic design sensibilities into my painting.

The narrative is also somewhat new for me. Usually, I make paintings that are pretty narrative neutral. The monkeys or tikis are usually alone, or it is not clear what is going on. My still lifes generally just depict the object without a background. So this picture is a departure for me. It has a definite narrative. It tells the tale of murder. 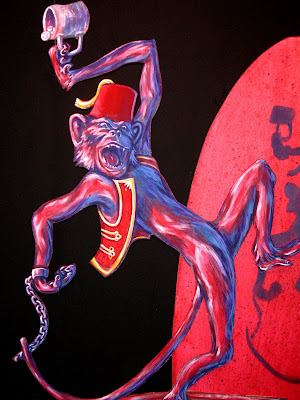 The Organ Grinder's disembodied head appears behind the monkey. Is the Organ Grinders soul going to heaven? or is he being dragged down to Hell by the anvil he is carrying in his mouth? Will he drop the anvil on the Monkey as payback for his untimely death? 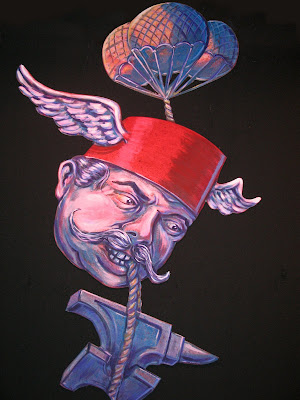 Its a silly story...and a silly painting. But it was a whole lot of fun to make. Perhaps there are a few more paintings I could make describing the dynamic between Organ Grinder and Monkey...

I look forward to seeing everyone at the opening night of Artomatic, this Friday night! (Stop on by and sample the circus peanuts!)
No comments:

This week just few by because I concentrated solely on the construction and painting for Spooky Dog and the Teenage Gang Mysteries...which opens in previews this Friday and Saturday in Frederick (check out this sweet preview report from the Gazette) Spooky Dog will open at the DCAC in Adams Morgan on June 5th. Check out Landless' homepage for more details...and stay tuned to BTT blog for upcoming "scenery appreciation nights" (and the discounts that come with membership in the Artbyjared fan club...) 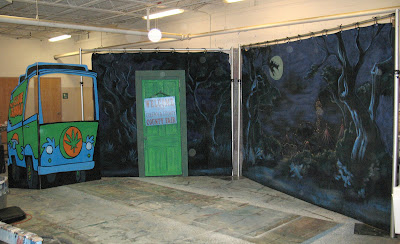 The whole set setup in the scene shop... 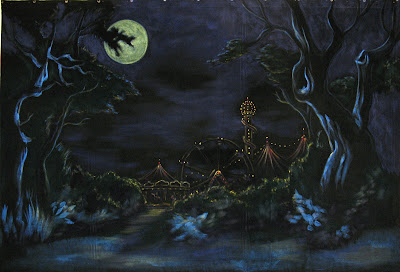 Detail of the main drop
Acrylic on Velour, 12'x8'
I'm off to try to make something for artomatic...
No comments: 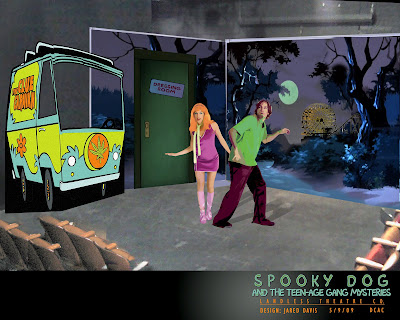 Things have been crazy...so above is the sketch for Spooky Dog...Which I intend to have completed by this time next week (!)...Haven't made much progress on the Artomatic painting front...hopefully I will be able to pull something out of my butt between now and the 26th!

See you next week!
No comments:

I took a staycation. That's right, I took time off from the scene shop, and just stayed at home and relaxed. Well, I didn't really relax, per se, because KT took time off from Olney too. So, we spent the week fixing up the house, and generally getting stuff done that we normally don't have time to do. It was a needed respite after the whirlwind of stuff that happened in April.

But even in a staycation duty calls. To start the week off right, I had my site selection for Artomatic on our first official day off. KT helped me find the perfect space: 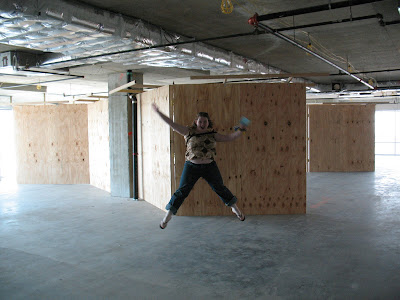 KT is excited about my space...8th floor, Area 5, Space 8....or the Northwest corner of the 8th floor, on the end closest to the stairwell...

One of the reasons KT is so excited is that she realizes that my space is facing (well, my row, at least) the national mall, and therefore has a good view of the fireworks on the 4th of July. I like the idea of seeing the fireworks from inside an air conditioned building that is serving beer (unlike those poor suckers on the mall, who have to get sauced before they left home) 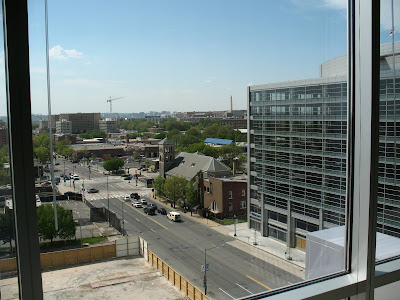 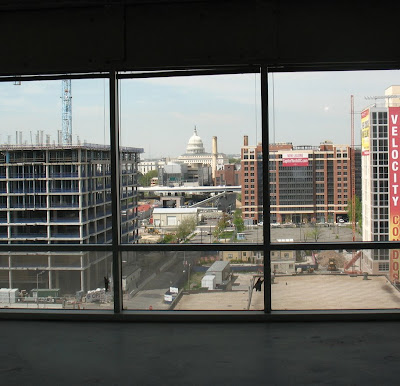 ...and just for kicks, here is the view if you look to the right of my wall...isn't our city pretty sometimes?

Shortly after selecting the space for Artomatic, we went to the "scenery appreciation night" for Walmartopia. Landless has agreed to institute the "Jared" discount on certian "scenery appreciation nights" so that my friends and family can come, er, appreciate the scenery on a given production for a reduced rate! So, J-Rod, Mike and Jaya were able to see such a quality show for less than what you plebeians have to pay...KT said that Walmartopia was "better than Batboy"...which is high praise from her...

The next day Walmartopia was struck and a small production meeting was assembled for Spooky Dog and the teenage gang mysteries...I should have some sketches (if not progress on building the actual set) for you to see next week.

I also became an NRA member that day...and then got kicked off the range...but hey, that's just how I roll...

On Monday April 27th, I saw Star Trek. That's right suckers, I saw Star Trek almost a full two weeks before you did! (Thanks Paramount, partial sponsors of Yuri's Night 2009!) My review: IT WAS AWESOME! I am going to see it (ahem, again) in IMAX this weekend!

So, other than the home improvements (clearing out the evil plants under our front porch, painting porch railings, installing new lattice, putting 1600 lbs. of decorative rocks under the porch, etc) the week went pretty uneventfully, Until...

My meeting with Red Bull and the Georgetown restaurant Mei N Yu about a photo op commission that they want for their big summer event. They asked me to design something like the "muscleman cutouts" you would see on a boardwalk on coney island...except Asian and with Red Bull...So, I made three sketches: 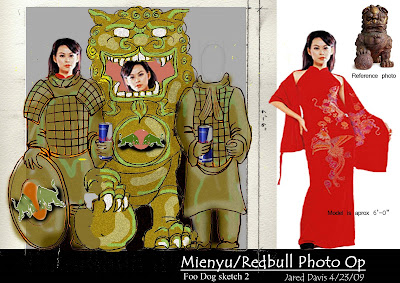 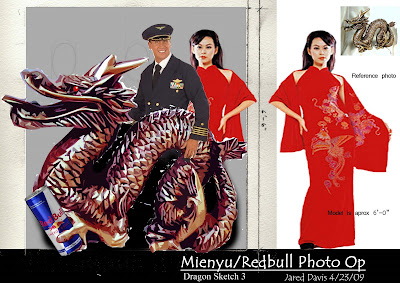 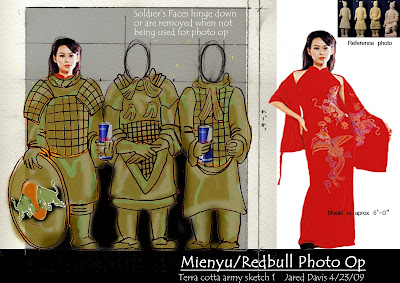 They seemed to like the last one best. I happen to agree that three terra cotta warriors from china is the most direct "photo op"...that is, you wouldn't have to explain as much to people about photographing with them...plus they can take one away if there are only two people...The Red Bull people have decided that they want to sculpt the armor out of red bull cans, and have already lined up a Baltimore artist to embellish my designs...you should expect to see pictures of these leaving the shop sometime in mid June.

And Lastly, my Staycation was rounded out with the strike for Follies. It could have been much worse (in fact we had planned for it to go very badly) but in reality, we were done with everything by 3am...we had filled 2 1/2 dumpsters with the tiny cut up pieces, but we were done....Follies was one of those landmark shows for an organization like TAP (you can check out the DCtheaterscene article here) and I am proud to have been part of it. But in the end, I am relieved that it is over...
No comments: