Okay kids, so I am uncharacteristically posting a day early because I will not have the time to post anything (or make any art, really) for the next two weeks. Why you ask? Well, I am one of the core staff that will be outfitting the brand new Artisphere with all of the audio, lighting, video, risers and stage management in the big push to get it open (once we have our certificate of occupancy *fingers crossed*eyes rolling*) by the numerologically significant date of 10-10-10...(not to mention the fact that we will have two full galas, a press conference and an advisory board meeting all before 10/10...but who's counting?)

Anyway, long story short, I will be busy. In the meantime you can take a gander at the 5 new Velvet Villains that I have made for the Spooktacular giveaways...(BTW, big shout outs to Kirstra, Jei, Brian and KT for being my sweatshop monkeys over this past weekend...they did an excellent job preparing all 48 (!) velvets for painting...thanks guys!) 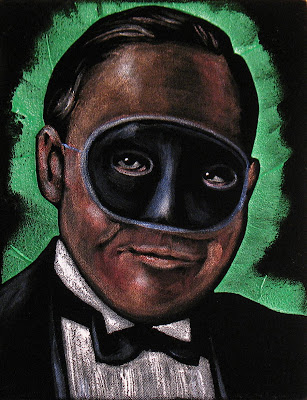 The Playboy
Acrylic on Velvet, 8"x10" 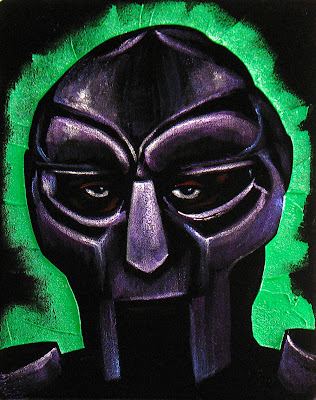 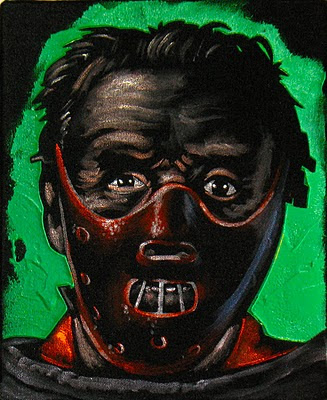 The Cannibal
Acrylic on Velvet, 8"x10" 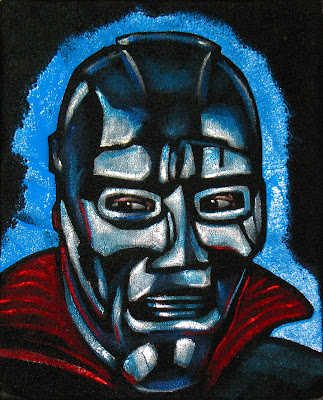 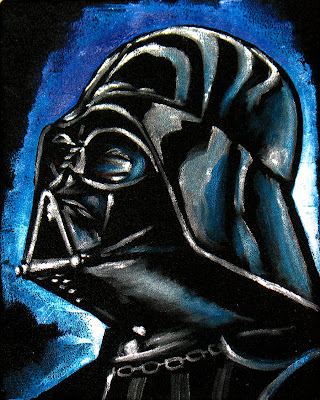 So, yes I succumbed to the dark side and did a Darth...but I am only doing 4 (the rest get 5) so that he is a special gift for the particularly geeky...
No comments:

The Villainous Velvet Villains of Villainy

Its been an exciting couple of weeks since I last posted to the blog. We have started to hone in on what the Halloween party will look like, and I have honed in on what Evil Dead the Musical at the FCAC will look like as well.

Every Spooktacular has had certain elements that have become...traditional...For example we introduced the idea of a theme in 2006 (Haunted Vegas) and every year since we have had a theme (2007 El Ocho, Mexican Day of the Dead...2008 Heart of Darkness, jungle theme...2009 X-marks the spot, Pirate theme...Ya know, to be fair, 2005 was the the first themed year, our wedding, haunted mansion) And some other elements have become traditional too...Karaoke Hell, Backyard Photo Op, Margarita Machines, a Game and Prizes/Giveaways....well this year we have decided to make the giveaways a bit more fancy than in previous years...

In keeping with the theme (Villains) I have endeavored to make a "Rouges Gallery" of small (8"x10") velvet paintings of different villains. What I will be doing is painting multiples of the same painting, in the hope that I will have 25-48 of them done by October 30...check out some of my progress so far:

The Egyptian
Acrylic on Velvet 8"x10" 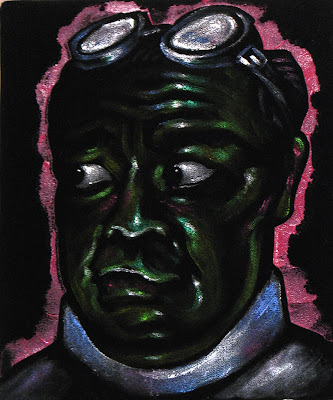 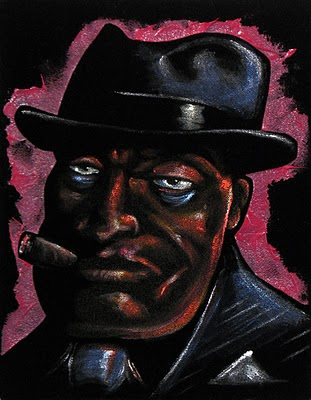 The Kingfish
Acrylic on Velvet 8"x10" 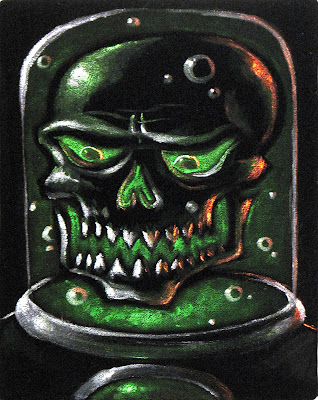 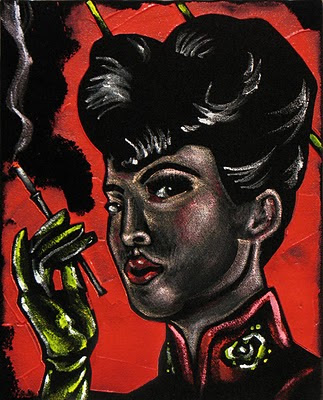 I think I have five more designs to go...which means I will be doing five of each of these (am I crazy?!?) Perhaps we should make the game really hard this year...

Okay, here's a question for you loyal BTT readers...Should I include Darth Vader? He is perhaps the most recognizable super villain in the last 100 years (other than Time magazine's runner up for man of the century, You-know-who, of course)...and Darth would look wicked cool on velvet...But, thus far, I have been making these villains as amalgamations of villain tropes, and not very specific, which is kinda cool too...also, I would be avoiding the whole copyright thing seeing as I am giving them away...So, what do you think? To Darth or not to Darth?

Also I have been plugging away at getting the FCAC version of Landless' Evil Dead the Musical designed and ready to go...here's the first draft of the paint elevation: 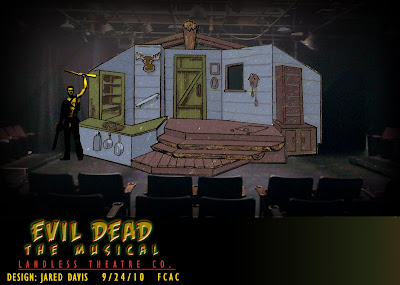 I was able to finish the DIY Minions painting just in time for the Beautiful Minds exhibit opening this weekend (Beautiful Minds is part of a larger festival opening the SE Waterfront, near Nats Stadium...click on the link here for more info) I hope you all can come out on Friday or Saturday to see the painting in the flesh...In case you cant make it, I will give you a sneak peek below: 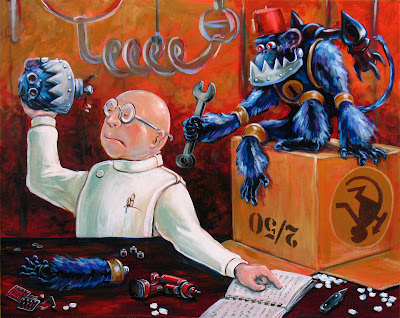 I really like the way it turned out, and I think that this painting really pushed me into some new territory technically....still trying to find that balance between "loose" painting style and "tight" draftsmanship...

The 4 other pieces in the show are a mixture of things I have shown before, like the Devil and the Broken Man, and the Birdman and the Magic Cow...but I polished up some newer pieces that seemed ready to be shown, like Revenger Monkey: 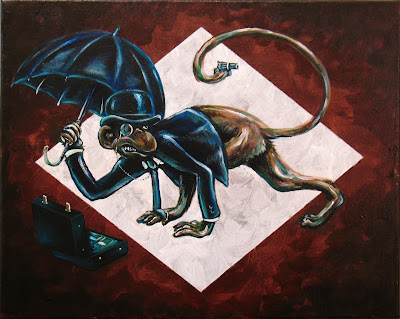 Revenger Monkey
Acrylic on Canvas, 20"x16"
Revenger Monkey was part of my villainous monkeys series...I guess I see him as an evil Avenger...so Revenger seemed like the proper title...he also owes a good deal to the Penguin, I suppose. 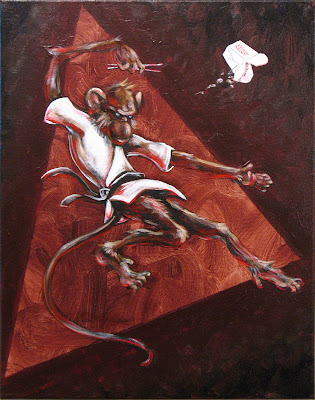 Kung Fu Monkey
Acrylic on Canvas 16"x20"
I don't know why this painting has been so hard to photograph...it's not particularly glossy in real life...anyway, what more explanation do you need? Its a Kung Fu Monkey...KUNG FU-CHOP!

Aside from the prep for Beautiful Minds this week, I have moved a bit closer to a final redesign for Evil Dead: 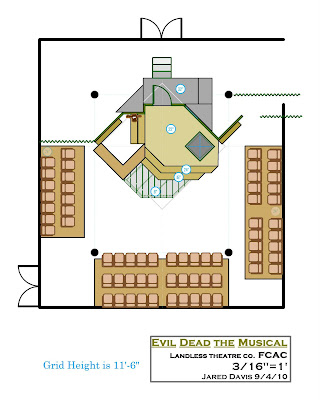 If you can read a floorplan, you will recognize that I have flipped the location of the kitchen and the trap door from the DCAC version...also, due to sight line issues, I am putting the kitchen on the "ground floor"...much like a cabin that has a sunken living area...I suppose you see that in larger "lodges" (rather than smaller cabins) and also you would likely see it on cabins built on the sides of steep hills...Anyway, its going to be somewhat different than the 2009 DCAC version, but that's okay, right?
2 comments:

Well, the Fall season has, er, fallen like the leaves off of a diseased crabapple tree...(I never really was that good with similes) that is to say that I have hit the ground running (despite this incessant "summer cold/sore-throat-for-three-months" thing!) and I have made some strides toward making it through to Christmas with my sanity intact.First, Landless. I meet with the Evil Dead production team tomorrow to hash out the details of the remount...I even provided this example "optimum blood spray pattern" drafting showing where we will need to place the blood sprinklers in the FCAC. 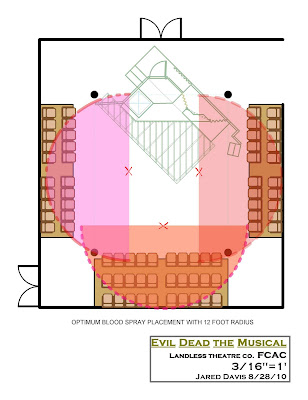 Also for Landless, I started sketching logos for some of the shows they are considering doing this season... 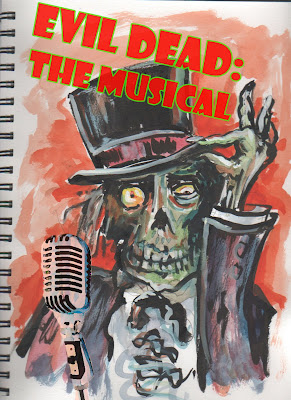 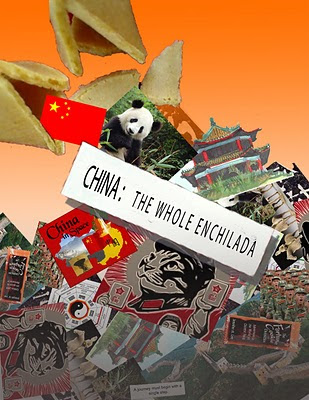 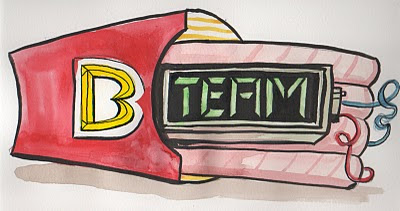 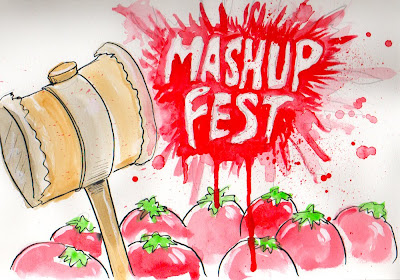 they haven't made the official announcements yet, so I am just showing you the most promising sketches...

I have been working on getting my mind wrapped around the theme for this years Spooktacular...Villains (preferably the super kind) So in order to double up on my "research" I have started working on a painting that deals with the theme of Super Villainy...If one is to become a Super Villain, how is one to recruit henchmen? In this case, you simply order them and assemble them yourself! I've converted my sketchbook sketch into a blueprint in honor of the theme: 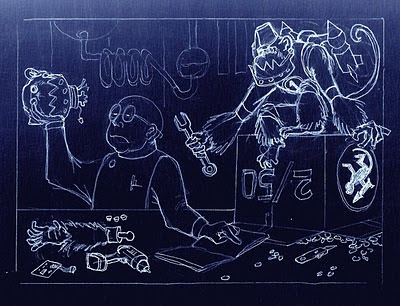 Blueprint sketch for "DIY Minions" (working title)
Pencil and Photoshop
I will be showing more sketches and progress on this painting in the coming weeks...(And they said I was MAD! BWHahahahaaaa!)

Oh, and I may finish DIY Minions just in the nick of time to show it at the BEAUTIFUL MINDS Art Exhibit at The YARDS PARK in SE DC (near the ballpark) Next Friday and Saturday September 10 & 11...you can get more info from ArtWhino Here