Okay, so staying with the monster theme, I am starting another painting. This one is of the defeated Giant Ymir from the Sci Fi classic Twenty Million Miles To Earth. Considered one of Ray Harryhausen's masterpieces, it tells the story of a crash landed spacecraft returning from Venus that deposits a tiny monster into the Italian countryside. It grows exponentially, and eventually rampages in greater Rome before being killed by a wall collapse at the Colosseum. This sketch is based off of a still I found on the Internet, but I am trying to reimagine the scene a bit, so as not to literally transcribe the scene from the movie. I like to think that this is another Ymir that has been defeated by a new secret weapon that the military has been keeping for just such an occasion (hence the tank with the strange weaponry) but, in true X-Files fashion, there are some pitchfork wielding eye witnesses peering over the edge of the crater as well... 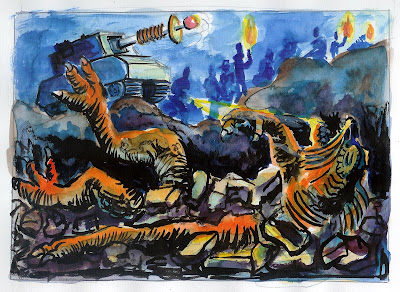 Defeated Ymir sketch
Watercolor on Paper 9"x12"
I've started the final painting this week, but will be interrupted by the impending holiday travel itinerary...I don't think I will get much done between now and the new year, so this may be farewell for a couple of weeks... When I return, I will probably have pictures of the dress rehearsals for Musical of Musicals the Musical!

Merry X-Mass and Happy New Year!
No comments: Links to this post

I have pulled out of the slump, and have started working again. I have thrown caution to the wind and started just painting whatever strikes me...so, without further adieu, I present a painting of a giant leech! 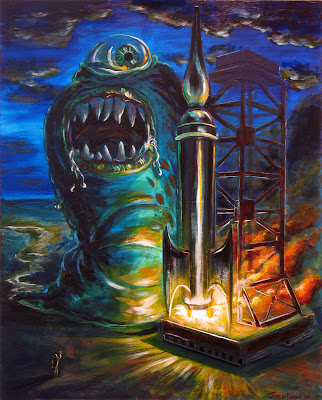 LEECH!
Acrylic on Board, 16"x20"
I have a few more sci-fi paintings brewing in me (just in time for the holidays) which is good because I will have plenty of work to display at Yuri's Night 2009!
1 comment: Links to this post

Pulling out of the the three week funk

Yeah yeah, you've heard it all before, I have apologized for not blogging at the beginning of so many postings that its become a cliche...perhaps we can get past that by agreeing on a word that would substitute for the apology...like, say "Slogging" (combining Sloth and Blogging)...or perhaps an acronym like: NETBA, (Nothing Entertaining To Blog About) or NMGO (Not Much Going On) or AFCBL (Artistic Funk Check Back Later)...Suggestions?

Now that we have that out of the way, I will recap what has happened in the last few weeks: Not much. Well, not much by the standards here at BTT. Kyle Jarrow did stay with us when he saw President Harding is a Rock Star. He seemed impressed by the show (which I think he considers a callow work from his youth) and he was also impressed with KT's prowess on the Miss Pac Man machine at Chief Ike's...

Harding has closed, but fear not, a remount of A Very Merry Children's Scientology Pageant will soon be reopening in its place. If you didn't get a chance to see it last year, this will be your last best chance (see it this time around, before all of the kids voices change) 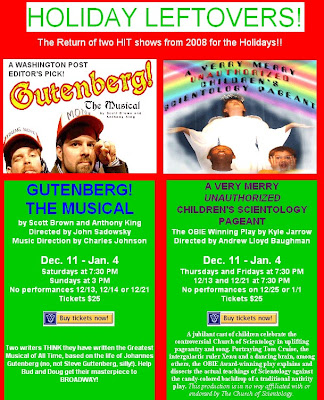 Thanksgiving came and went without too much hullabaloo...with the notable exception of my cat's colon troubles (He was literally saved from death row over the holiday...thank you Miralax!)

The day after Thanksgiving KT and I went to the They Might Be Giants concert at the 9:30 Club...they played all of the album Flood. It was a really great show that brought back all sorts of awkward memories of my misspent youth (sigh)

I did get some work done on the set for Musical of Musicals the Musical. I even made a model: 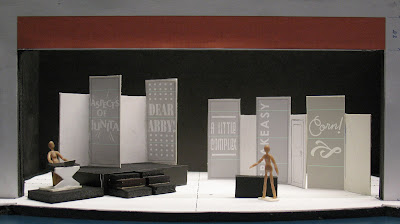 If you are in Detroit on the 13th, go check out some of my velvet paintings at Chin's annual holiday show. You can go to the Cats Meow for more deets

And Lastly, just to prove that I have not been a total slacker, I have scanned some of my sketchbook pages from the past couple of weeks. As you can see, I have been "doodle until you get inspired mode"...I promise to keep you posted on how that strategy turns out... 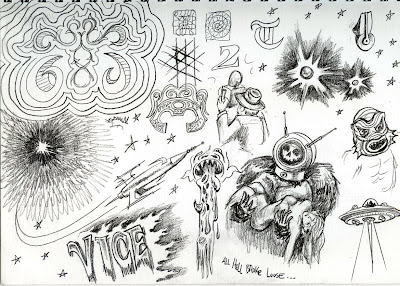 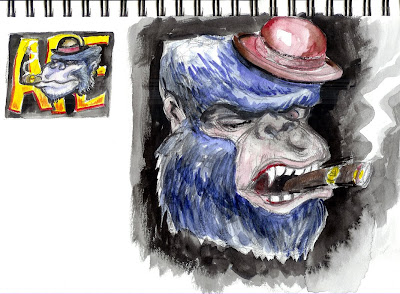 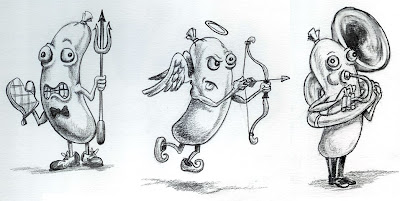 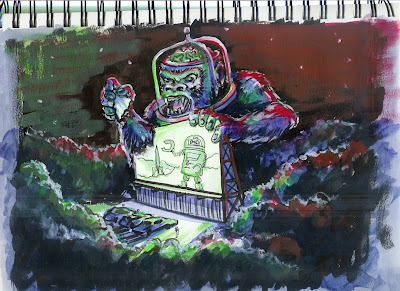