The fall collection refers to this weekends shopping extravaganza. I do, on occasion, need to clothe myself in new garments, thank you very much.

Anyhoo, I have been doing the "reset" button on my thang since the last posting. I got my phone back, I was a zombie (twice) and I cranked out a cup design for the SPOOKTACULAR...I am going to be doing a skeleton showgirl theme for the basement, so it seemed like killing two birds with one stone, by making the cup design coordinate...The cups are going to be green, with black ink. Which of the above versions do you like best? Hurry with your comments, cuz they are going to the printers on Monday!

I have also been amassing a bunch of library books in preparation for the HEXAGON show, as well as research for the velvet painting of Roy (of Siegfried and Roy) being attacked by a white tiger!
No comments:

I have been focused like a lazerbeam on a few projects, that have given me very little room to breathe; until now. Its really a paradox (a most ingenious paradox...More on that later) that whenever I am over-worked and hyper productive, I feel like I am slacking off and should be doing more...I guess its just the over-achiever in me (I guess there is a fine line between self-flagellation and over-achievement...)

Part of the reason for the lack of postings has been my piss poor documentation of late. I have no good photos of CANNIBAL!, TRIXIE's TO DINE FOR, PIRATES or NIGHT OF THE LIVING DEAD....But I will make up for it soon...To appease your visual needs, I do have some crappy cell phone photos: 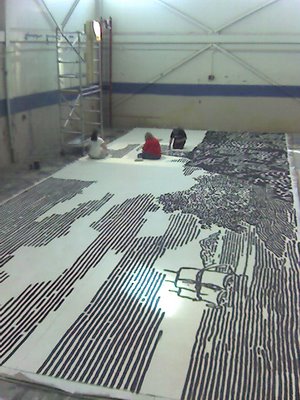 Painting the Backdrop for PIRATES of PENZANCE
50'x20' muslin backdrop painted on the floor.


It really seems like a few months ago, but it was really just since the last posting that we were painting this puppy. It really went fast due to the cleverly constructed cradle that was made by Pete S. to use the projector. This technique was instrumental in getting unskilled labor to execute the same "English woodcut/engraving" texture that I designed to run throughout the show.

Once this drop was finished, I grabbed my wife and we made tracks to the Nissian Pavilion to see the Dark Side of the Moon show. It was great, But Nissian Pavilion really sucks from a getting there/parking perspective.

So, Pirates load in went well, and I was able to use Jared R. to take portfolio shots (he bought a new camera and wanted to send it through its paces) Unfortunately, I don't have those photos yet, since he couldn't get them into a format I could take away that day. SO I am still waiting for them, but when they arrive, they should be pretty good. In the meantime, here is another crappy phone photo:

In the brief respite between the completion of PIRATES and the beginning of the build for NIGHT OF THE LIVING DEAD, I was able to develop a "logo" for this years Halloween Party. It is (hopefully) a beginning step towards a giveaway at the party, mini velvet Elvis'...With a Halloween theme... 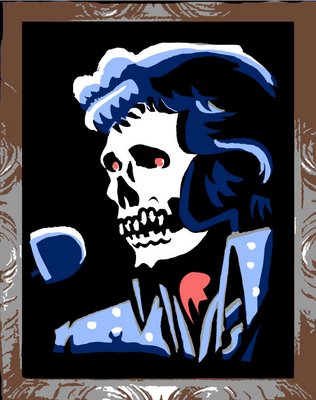 And then just like that, I was building NIGHT OF THE LIVING DEAD. It took me a total of three days to fabricate and paint the thing, all by myself. Since I rarely build what I design, it really took a lot out of me. But I think, given the constraints the DCAC has on LANDLESS THEATRE (no screwing to the stage, remove everything every night, no setting or moving lights, a shoebox to store the scenery in...etc) It is the best set they could ask for. I did not, however, take any pictures...I need to do that soon! BTW, it opens tonight...where I will be starring as a ZOMBIE EXTRA!

My Phone died. I couldn't hear or be heard on it. Radioshack needs to send it off, and then "they" will send it back and make them give me a new one...It's a real pain in the butt. It is a bit unsettling how much separation anxiety I have over not having my phone....(which is also a camera, PDA, MP3 player and so much more....)

This week marked the first official HEXAGON production meeting. The theme is something I think will be a very productive theme..."Sequin (sic) Circus" is what the director seems to want to push...I wont even begin to think about the thing until after the Spooktacular.

I saw Tim Gunn last night at the Corcoran. He is one class act. If fame were ever set at my feet, I pray that I would have the poise and grace of Tim Gunn...
No comments: