I have been taking it a bit easy since the Spooktacular, gradually getting myself together for the next set of projects (its interesting to note that last years post had a similar theme... as well as 2006's second November posting...)

Aside from a minor artistic crisis: "oh god, I don't have a show next week to paint pictures for, what will I do with myself?" I have started working on the set designs for Dominion Stage's Musical of Musicals the Musical. 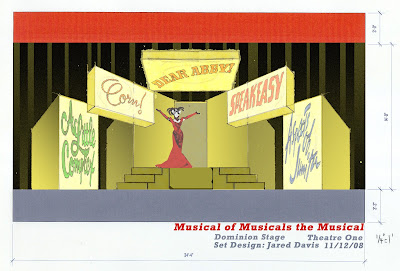 First Sketch for Musical of Musicals the Musical
Pencil and Photoshop, 1/4"=1'
I've already had a discussion with the director, who correctly points out that I have forgotten about the piano player. I neglected to design a space for him because I just plain forgot that he was to be onstage at all times. So this is by no means going to be the final version. One of the elements that will stay in future incarnations is the "light box" effect I have pictured above. You see, each of the boxes with the name of the show on it (there are five shows within this show) is actually a back-painted muslin flat. When lit from behind, the name of the show (for example "Corn!") will appear as if by magic...or at least that's the idea...
No comments:

Labels: Musical of Musicals the Musical

This past week has really been a blur... the historic election of Barack Obama has kinda eclipsed everything that happened just a few days before. But just for the record, I have compiled some photos of the scenery for Spooktacular IX and President Harding is a Rock Star. (you can find lots of the drunken photos of the Halloween Party here) 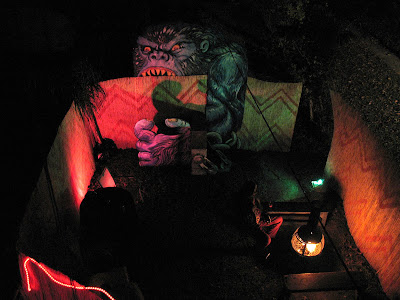 View of the backyard just moments before the party started 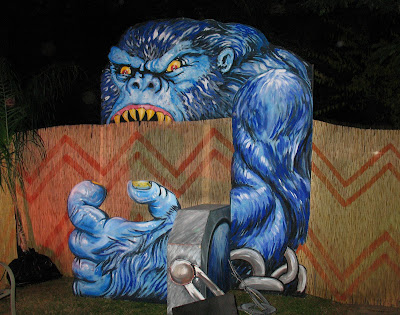 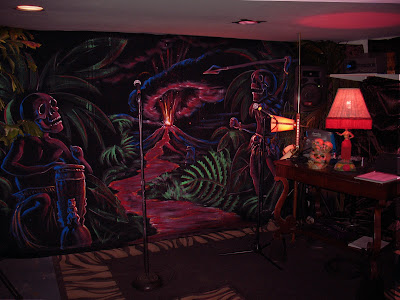 Karaoke Hell backdrop
Acrylic on Black Velour, 12'x8'
The photos of Harding are not the end all be all, because they were hastily taken during the first dress rehearsal. But they do help give a sense of the flow of the show... 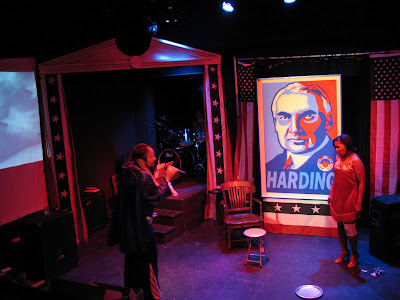 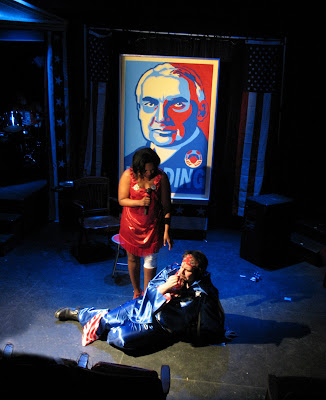 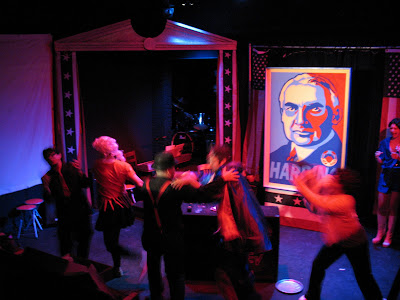 Oval office fight scene (my favorite part of the show)
So, it looks like I will be hosting Kyle Jarrow, the author of President Harding is a Rock Star (and A Very Merry Children's Scientology Pageant) at my house next week when he comes into town to see the Landless Production. (so book your tickets for the 15th if you want to see the author's world ROCKED!)

I have some news that I am kinda proud of...but I don't want to tell you for at least 8 weeks...when its official...stay tuned...

This upcoming week I am going to working hard on the preliminary designs for Musical of Musicals the Musical for Dominion Stage. I will also be working on Follies and Mumbo off and on in addition to starting to get back into the swing of that whole velvet paintin' thang...
3 comments: