I have been on staycation for the past week...so there is not much to show. KT believes in these semi-annual "purge" events that spruce up the house, knock things off of the honeydew list, and assemble things to sell at the yard sale (Sunday June 6th!). We did, however, knock out a proposal for Conner Contemporary's *gogo program...Its a total shot in the dark, but I have had this wacky idea for a while now, but I have never attempted it before because I haven't had a place to display it...here's a "visualization" of the project in their space: 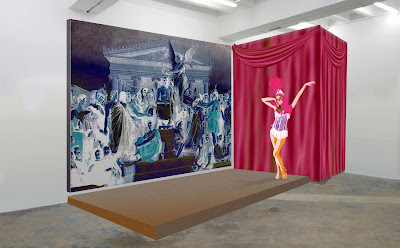 I don't want to go into detail about the project, because I am afraid it may jinx it...but lets just say that it involves a giant oil painting and burlesque performers...stay tuned!
No comments:

This week I will start with the Monkeys. Below is the next (number 2 of a proposed series of 12) Daredevil monkey painting watercolor sketch: 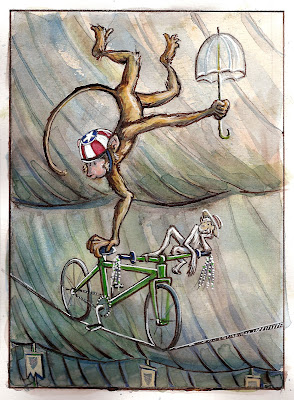 Watercolor Sketch of "Highwire Hi-jinx" (working title)
Watercolor on paper, 5"x7"
I am hoping to make twelve of these kinds of paintings. Mostly in order to stock up for Arts on Belmont (Adams Morgan Day) in September. Unfortunately I am the type of person that needs a deadline, so without a "show" to work towards, I just don't get anything done. So, hopefully I will be able to make 12 of these types of Daredevil monkey paintings by the 4th of July!

I have been starting with watercolor sketches in order to work out both composition and color scheme. I think that the major issue with this piece is that I needed to demonstrate that the monkeys were really high up...so I thought the inside of a tent, punctuated by tiny flags on the lowest register would help create a sense of height...and at the same time, be pretty neutral so that the background doesn't detract from the monkeys...Unfortunately, Watercolor is kinda unforgiving, so I wasn't able to tweak the background as much as I'd like. But it helps me get the problems identified, so I can work them out in paint...

Did you know that Scenery Appreciation Night (SAN) for PEREZ was this Saturday May, 22nd? Well, you should if you are a loyal reader of BTT...and you already have your tickets, right? If not, here's the address one more time: WWW.LANDLESSTHEATRECOMPANY.COM

We also have been getting some good reviews...particularly from DCTHEATRESCENE.COM

..From here, saving the universe doesn’t sound so far-fetched after all. It doesn’t hurt that the set by Jared Davis – a scenic little panorama of Los Angeles and its iconic landmarks – only comes up to waist-level, endowing the actors with Godzilla-sized stature. Talk about looking down on high society.

And also some praise from the actual writers of the show:

In terms of the physical production, we really loved the brilliant light-up Christmas village version of LA and the fun theatre tricks they were able to pull off in that small space! My favorite type of theatre is done for $100 on a stage the size of a postage stamp, so this was right up my alley.

Hope to see you on Saturday! And remember, we are going to the Girls Gone Gutter show at the Palace after PEREZ for the traditional "post show discussion with set designer Jared Davis"...
No comments:

I got a chance to watch the final dress rehearsal for Perez Hilton Saves the Universe or at least the greater Los Angeles area last night (while taking some photos) and I have to say that this will be a fun show to watch. Mostly if you are fan of the tabloids, like TMZ...or cant stand the cult of celebrity...It should be entertaining for both ends of the spectrum...
Here's a photo of the set at the DCAC (complete with Lady Ga Ga photo): 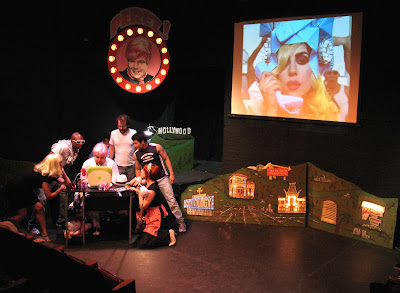 So, just to hammer it home one more time, Scenery Appreciation Night is going to be Saturday May 22nd! And as a bonus, we are having the "post show discussion" at the Palace of Wonders, during the 11:30pm "Girls Gone Gutter" show! Hope to see you all there!

The rest of the week was dominated by last weekends mini-vacation to Knoebels...never heard of it? Check out their website or you can see all of the awesomeness they have to offer from their park map: 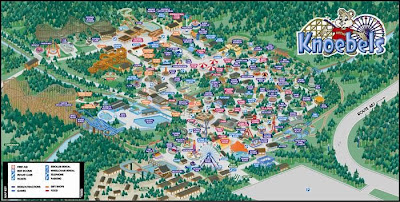 And you can see that KT and I were having fun on the Ferris Wheel... 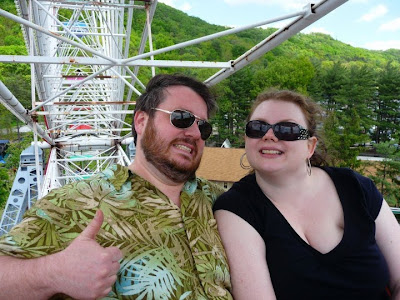 ...despite the ubiquitous rusty bolts and whatnot, we managed to survive!

Now that I don't have any impending shows to design, or build, or paint...the first time in more than a year(!) I have started to think about making paintings again! In order to get back on the horse, I have decided to continue right where I left off with my Daredevil Monkey paintings! 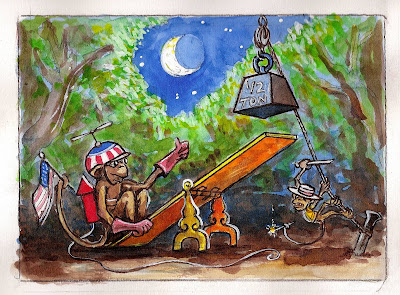 Monkey Moonshot Watercolor Sketch
Watercolor on Paper 7"x5"
I have started to take KT's suggestion that Floyd (the monkey in charge of Fearless' exploits) be a tiny monkey. It changes the dynamic between the two characters a bit...More like the small dog and the big lug of a dog in the old Warner Bros cartoons. But, I'm okay with that...The two monkeys haven't really ever been the exact same two monkeys from painting to painting anyway. I like the idea that they are mailable, and can look different in each painting...It keeps these paintings from becoming too repetitious or cartoon-strip-like...
2 comments:

As promised last week, the fruits of this week's labor is the second half of the PEREZ set, laid out below:

This is roughly how the flats will be laid out during the show (you can compare them with the rendering from last week here) You cant really tell from this photo, but the larger buildings are going to be rigged with Xmas lights, so that they light up when that location comes around in the story.
Here are closeups of each flat: 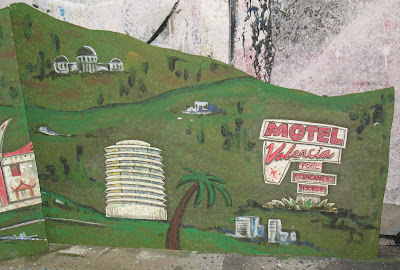 The Capitol Records building, Griffith Observatory and The Motel Valencia...(the motel is where the terrorists will be staying in the show) 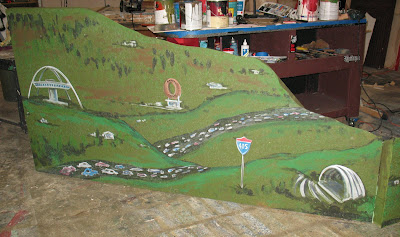 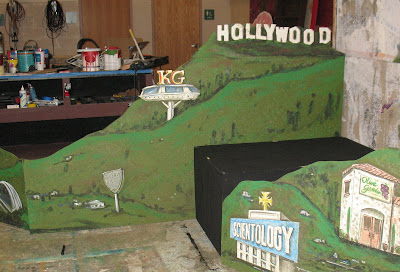 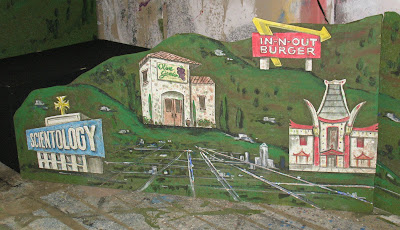 The idea was to create Los Angeles in the DCAC...so I was going for that "tourist map" kinda look...Its a bit weird because living here in DC, there are lots of places that I could point to in order to make a tourist map...you cant swing a dead cat and not hit a monument to something around DC...but LA is a bit different...there's no "Statue of Liberty" or "Capitol Building" or "Eiffel tower"...so this set proved to be a bit of a challenge in that respect...

The Show opens next Friday May 14th! You can get your tickets HERE.

I would also like to announce the PEREZ Scenery Appreciation Night (SAN)! You will get a chance to see that show and have a post show discussion with the set designer himself on Saturday May 22nd! Email me for the special code for SAN attendee discounts!

On a personal note, this week I became an uncle. My brother's wife, Wendy gave birth to a 6lb baby boy named Thaddeus...in China! So, I wont be seeing the lil' bugger for another year or so, which is fine by me because I am not too big on the infant thing anyway....bring 'em to me when they are talkin' and walkin'...

Perez marks the last scheduled show I have until the fall, so I am looking forward to a very productive painting agenda this summer...More about that next week!
No comments: