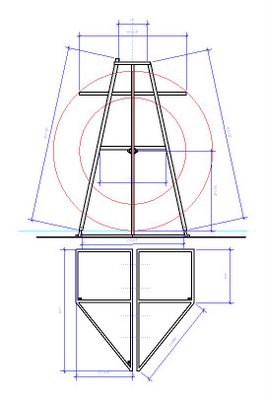 Wheel of Death for Lobsterboy Review

I spent most of the day on Friday coming up with a good artist statement for the ReMastered show. I think that I really caught a stride. I get into the most trouble when I try to make ponderous statements about my work. I just kept it to the point…and you, dear reader, will just have to go to the show to read it! Oh, by the way, the show’s opening has been postponed by a week. That’s fine by me, because I can use all the time I can get.

At the yard dogs show on Sunday (BTW, what a good show…I could quibble about some things, because everything can be improved on, but all in all it was rock-solid) I got into a conversation with Lobs (not performing, just an audience member) who I think suddenly “got it”. I have been telling him he needs a backdrop for a while now, but seeing the drops and drapes that the Yard Dogs had, really sold him. So, I have taken measurements at the cinema and drafthouse and am making a backdrop (and helping purchase the P&D), doing a small comic book, welding a wheel and knife throw effect, and perhaps doing a poster for the TOXIC TIKI PARTY! (Sunday June 25th) Needless to say, I am really busy doing the lobsters bidding…

Saw the ever glamorous studio of Scott Brooks (which overlooks Malcolm X park…if you lean out the window…)(I’M JUS KIDDING! Ay Dios Mio!) and am finally a owner of the artists work…(although I am still holding out for him to make prints of the stuff going to Seattle) I wish I lived in a hip part of town that had its own artists studio crawl…see you in Petworth in five years!

Went to a “Role Playing Party” over the weekend…Like whoa man. I went in my Satan outfit; Its good to be the Prince….all of my Detroit playas will understand this next reference: it was like Gotham City Café…I keep saying that Ian McGill would do well here!

Anyway, I promised you all pictures of what I am working on all the time, so above and below are two JPGs of VectorWorks stuff I have been working on this week…

Elevation for Joseph and the... 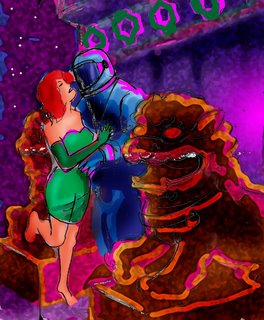 Computer colored sketch for Versus Project
I have been trying to chug along with the Versus project this week, but KT rocked my world over the weekend. Its one of those things…when you are convinced that you are doing the right thing with a painting, but you have a sneaking suspicion that you are a tiny bit off the mark, then someone comes and deflates your whole mindset by pointing out the very thing you knew was wrong in the first place….Anyway, what happened is that KT took one look at the above sketch, and said that she “wasn’t on board” with the astronaut. After a crushing emotional setback like that (I think I have reached a new height in navel-gazing, BTW) I needed to delve into why….Her reasons were vague, but it boiled down to the realism of the astronaut. To make a long story short, the problem is that I was trying to make very realistic work. I know that I have the technical skill to do so, but for some reason, my work looks forced and flat when I do that. My work really works when I am not trying to impress anyone with my skill…she said to me at one point this weekend, “maybe you aren’t that type of painter”…It’s really true. I just need to get over it and embrace the funky-stupid painter that I really am. So what that means is that the astronaut doesn’t need to be tied down to one type of spaceman. He is free to be as Sci-Fi, as Flash Gordon, as Rocky Horror as he wants to be!

Consequently, I made some great strides in the Spaceman Vs. Octopus painting over the past week. I have made it the subject of the upcoming Studioneight REMASTERS show. I am using the Laoocon (the spelling of that trips me up, sorry) as my “old master” work…

This week has also been a weird one for this blog. On the one hand, its good to hear that people are reading it [but not commenting…] (although I have always secretly hoped that no one was ever going to actually read it …except for ancient future space archaeologists who might find the internet from the early 20th century and create whole intergalactic cults devoted to the weekly musings of the prophet who wrote between the tines….) but on the other hand, it does bring up accountability issues… However, I will keep the self censorship to a minimum. I may be subject to bouts of hyperbole, I am a gas-bag, I may hold grudges, but I only want what is best for everyone: A healthy, thriving, unfettered art scene, with the best art that we all can produce…at the highest possible prices….

In other news, I saw the Hokusai exhibit at the Sackler (or was if Freer?) on the day it was to close. Despite the crowds, it was still a knockout show. The paintings were fantastic. There is something about painting on silk that helps bring out that creepy haze that permeates Edo period art. Although this isn’t the period of Japanese art that I collect, this period really typifies the changes in the Japanese artistic mindset. Its curious to think of the same sort of thing happening at the same time in France…that is, Delacroix’s work being a bridge from rococo (and essentially unchanged since the Renaissance) to the modern world, Hokusai’s work makes the same transition possible in an isolationist nation, halfway across the globe, at the same time!

Lastly, I’m becoming a champ at Vectorworks…I am making some of the sexiest drafting I have ever made….too bad it’s for Joseph….
2 comments: 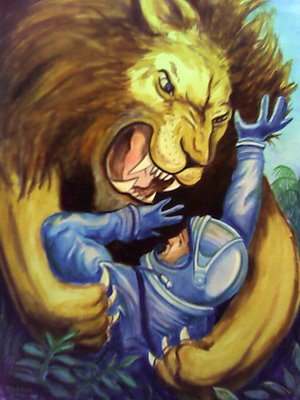 Versus Lion 2006
Watercolor on paper, 22" X 30"
I made some progress on the Versus project (BTW it’s “midterms” for my self imposed “spring semester”, Ill be using this week to chart my progress towards my goals) by completing the watercolor of the Lion attacking the Astronaut. The watercolor step is a bit unusual for me, (so much so that I dropped about $40 getting tubes of new watercolor paint to replace my old, dried ones) because I usually just start painting and do most of the work on the canvas. But this helped me find the flaws in the composition…like the lion’s other ear, the way the claws should rip into the spacesuit, the way the spacesuit needs to lay. I’ve discovered that I do really well reproducing something I have a model for, (i.e. direct observations, or photos) but when I have to “fill in the blanks” I start getting a “cartoony” result. I was aiming for a pretty realistic rendering for the “Versus” project, but unless I take the extra step and pose a model in a silver jacket, I wont ever get the spacesuit to look right. The watercolor has helped to define the problem in more than one way. The conflict here is between a “generalized” or “cartoony” look and a “specific” or “realistic” look. I may have to make a cut paper version of this series to help get me back to the type of look I was getting with my Winter Self Portrait.

I have some more of the Versus project drawings in the hopper…up next: Woman, Octopus, Robot… 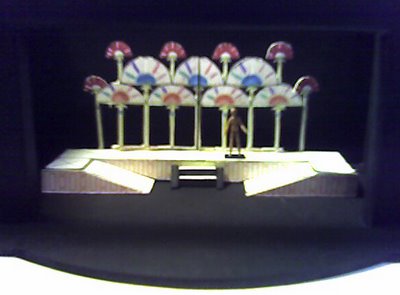 1/4" Scale Model "sketch" for Joseph and the Amazing Technicolor Dreamcoat
My “Joseph and the…” meeting went pretty well. Above is a phone pic of the model. I needed to build a model in order to convey the idea that the “fans” open up like a gate to reveal Egypt (or the Elvis Pharaoh, as the case may be). I have another two weeks to crank out the final plans to give to the shop…then it’s on to “Fiddler….”

Went to 80’s anti-prom at the Black Cat on Saturday, I forgot how much I love that goofy music…

The meeting with Lobs and Gabe went well. I am going to illustrate the comic that Gabe will eventually write. The whole thing will then be used as a flyer for the show. It doesn’t provide for a way to get paid for the work, but I am working on how to make that happen…I also committed myself to converting my “wheel of misfortune” into a spinning-knife-throw-human-target. It will give me a chance to do some welding…

The Remastered show looks like it might actually happen. I need to get on top of that…I don’t have the excuse of it being “political art” this time….
No comments:

My Cat Has AIDS.

That’s right, my cat has AIDS. Well, it’s FIV. He’s FIV+. Turns out that there is a vaccine for this, but my vet doesn’t think it’s very good, so my cat didn’t get it. Now my cat has AIDS and shouldn’t go outside. It’s a quality of life issue for the cat (and for me, frankly) he needs to go outside. Most cats live for 9 years after diagnosis...he’s 11…so its not like this is going to get him quickly…Its just that if I let him out, he could bite other cats and infect them (the only way its transmitted) or he could become susceptible to other diseases because of his compromised immune system. It’s the kinda thing that can really ruin your whole day. I wonder how farmers who find out that their cows are BIV+ feel…I am really emotionally mixed up on this….

In other news: the can got finished and seemed to go well for Trixie’s event. I asked her about doing something for the Sausage themed show they have coming up… Below is a phone camera image of the finished product: 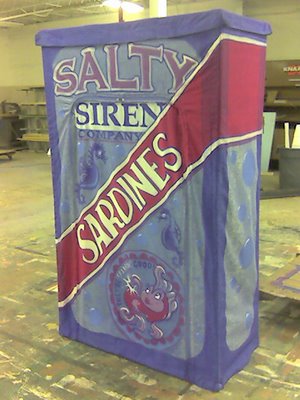 I made progress in the Versus project. Below is a phone photo of the sketch for the first in the series. I am hoping to take this one and make a watercolor from it. And also start working on the alien version in drawing format. I talked to KT about this project over 6 month anniversary dinner (thank you) and she thought that the whole thing should have a more “Monty Python”esque feel to it. As if the astronaut were saying “I’m not even supposed to be here today!” I like the idea, but I think it will develop naturally if I start working on it more. The lion has a lifeless feel in the eyes when its reduced to screen size...I think I can get around that when I paint to near life size. 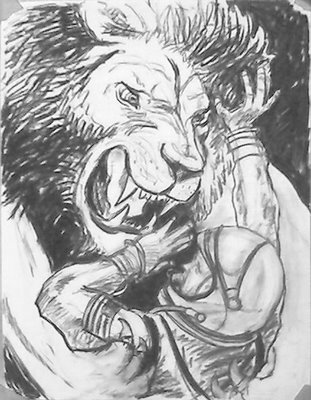 We went to see Landless Theater Company’s Godzilla at the DCAC. It should have been better, but I still had fun. I called them up and asked if I could participate in their upcoming production of Night of the Living Dead. They want to set up a meeting after Godzilla closes….

Of course, this is all under the backdrop of my Treo 650 dying. I couldn’t hear or be heard on it, unless I had the headphones in. Radioshack needed to send it back to Treo to be “fixed” (which is stupid because we all know that they will just replace it, which Radioshack could have done on the spot) which means I am without my Treo for the next 7-10 days!!!

I also shut off our cable this week…goodbye Deadliest Catch!

Well, I guess I know why the whole AIDS thing has hit me so hard, it’s been a crazy week!