Too busy and Two pix 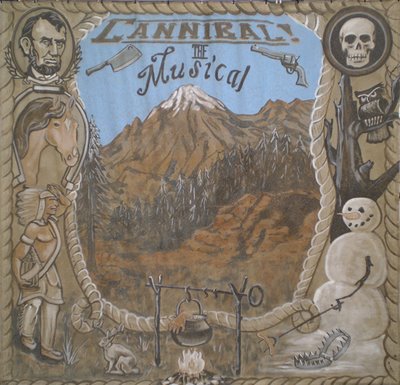 Backdrop for CANNIBAL the MUSICAL
12'x12' Acrylic on Muslin

I'm sorry that I skipped a week, but I was at the Hot Rod Hula Hop, and it has had me so frenzied that I havent had a moment to do any blogging. So, above is the final version of the cannibal drop, and below is the final shots for FIDDLER. I will post HRHH2 shots as they become avaliable.... 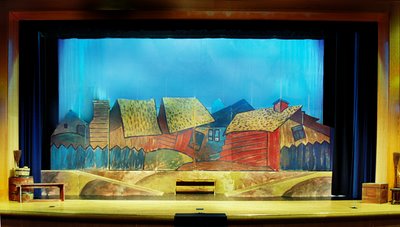 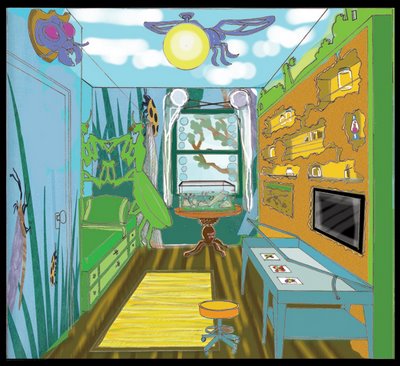 There are some major developments that…developed, this week. First, as I cryptically alluded to some posts back, I auditioned for an HGTV program called KidSpace. This involved cranking out a hypothetical design for “an aspiring, eight year old, entomologist.” Yes, on top of all of the other stuff this week, I needed to design a “Bug bedroom”. I had very little time this week because it was the last push for FIDDLER. I did another all day Sunday and an evening Monday, but the darn thing is up and installed (I even shot photos today…sorry, still using film, they will be developed tomorrow) Other than the slight miscommunication about the supports from JOSEPH still being visible over the skyline of Annatevka, it looked pretty good.

Monday was the audition, which overall, went well. I am going to be one of the “backup” people, since the other design positions have been filled. Its kinda weird, because that sort of puts me in the position of “understudy” which entails a secret desire to have someone else break they’re leg…well, in the end, I am only out a weekend of research and drawing, and the embarrassment of knowing that there is an audition tape of me out there now… 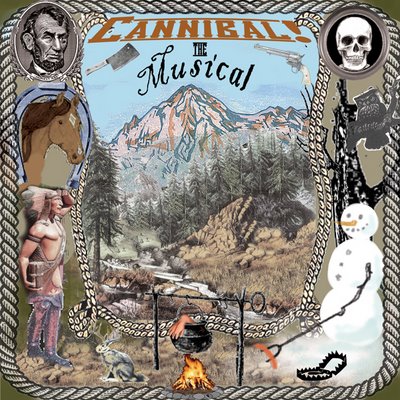 Layout Design of backdrop for Cannibal the Musical

I have hammered away and resolved the final layout of the CANNIBAL drop! I begin painting this monster tomorrow, with high hopes of pulling it up Tuesday!

By this time tomorrow, it will be only one week until the HOT ROD HULA HOP in . I have lots of work laid out, to help fill the tent (oh, and I need to assemble the tent for the first time, and do all of the little things…but my amazing wife, who secretly loves to sell things, has been taking the helm on that end of things. My gratitude runs eternal….)

New Camera for the County

We bought a new camera for the County, and I just took these photos...they sure beat the heck out of my Treo 650 phone photos! 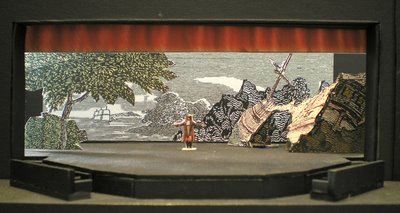 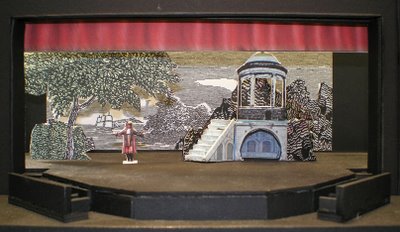 Rumble in the Juggle 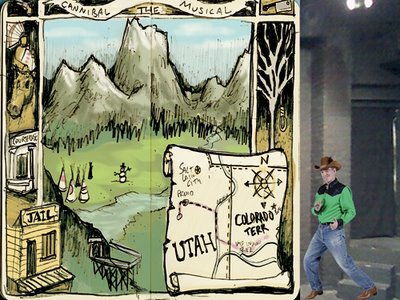 The week that was, blow by blow:

Round I: PIRATES came out swinging in the early rounds. I needed to make a second act for the model (no photo here…you’ll just have to come to the show...it opens September 29th, FYI) so that I could show it by the Tuesday deadline. The model was approved with minor changes by Malcolm…who was a bit distracted by the auditions he was running at the time.

Jared wins this round, but only on points, because he will still have to create Vectorworks drawings for the carpenters later on in the fight.

Round II: Wall Mountables opening. Jared looked a bit sweaty and tired at this point in the fight, perhaps he was looking forward to the BBQ in the upcoming round, or was it that there were a gazillion people at the opening? Most of the work looked good, but major damage was caused to Jared’s sense of taste, due to the “low blow” by an anonymous “artist” who used the space directly next to Jared’s for his poorly stenciled “Free Palestine now”…er…artwork. However late in the round Jared was able to regain his composure with the support of longtime supporters Scott and Mike, and fellow blogger Alexandra Silverthorne.

Round III: Leaden footwork dominated this round because of the relentless punishment that model making for Pirates was handing out. However, late in the round, the BBQ in Petworth provided a well deserved respite in the corner. While there, Jared’s fight coordinators kept him plied with beer and kabobs. Jared appeared to be a bit punch-drunk at this point in the fight, and he was given a litany of Trivial Pursuit questions to determine if he was able to go on…

Round IV: The most punishing round in the whole fight came when FIDDLER needed to be painted. After fighting off an early round hangover, Jared came out swinging. Hour after hour, the FIDDLER would not give in. In the end, Jared was able to only eek out some progress, and definitely lost on points in this round. He knows that FIDDLERS day will come. “I’m comin’ for you next Sunday FIDDLER! You hear me?” taunted Jared from his corner at round’s end.

Round V: Jared’s Mouthpiece needed adjusting, early on. Then punishment was metered out by the striking of electrical equipment at TJ. However, late in the round, Jared showed off some fancy footwork at the first production meeting for CANNIBAL the Musical. The judges scored Jared high for his deft handling of the initial sketches…

Round VI: This last round encapsulated the tone of the entire fight. It started early with some light design work for PIRATES, then moved into moderate progress towards making more work for the HOT ROD HULA HOP, but the end of the round was punctuated by promises and trash-talk. At the end of the fight, a new challenger threw down the gauntlet. His name…”CHILDRENS MURAL PROJECT”