NYC and the Calm Before the Storm

Hey there, I just got a second...I've been traveling with KT to NYC this past week, and I don't really have much to show for it except for this drawing I made while visiting the MET: 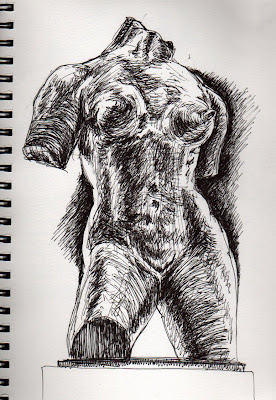 I had a few hours to kill while KT went to a gift shop convention...so, I found some early modernist sculpture adjacent to the cafe to draw...

This time of year always feels like the calm before the storm...I am excited that it will be fall soon, and terrified of the deluge of work that fall entails...Stock up on sandbags and I'll see you next week!
No comments:

Its not often that my art becomes an arrow in Cupid's quiver...but last week I found out that it was exactly that. I got this email from a schoolteacher in Michigan, and she explained to me that she was looking for an anniversary gift for her husband. Turns out that they met on a blind date and sat in a booth at the tapas restaurant Sangria in Royal Oak, Michigan. Back in the Spring of 1999 I painted about 7 paintings for Sangria. Four of which were cubist(esque) still lives representing the four seasons. Well, as it turns out, the schoolteachers first date with her future husband was underneath "Winter" painted by yours truly.So, she contacted me and asked if I would be able to paint her a reproduction of the painting as a gift to her husband for their anniversary. (Awwwww) So I obliged her with a 1:16 sized replica (the original was 4'x4'...so this one was 12"x12") 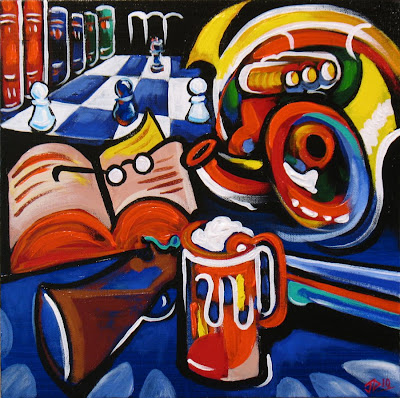 Needless to say I have grown a bit as a painter since 1999, so it was weird "forging" myself...

August is the calm before the storm of September/October...but the calm got just a tiny bit more quiet this past week. I found out that I cannot attend (and sell my wares from a tent) the Adams Morgan Day festival! Which means that I don't have any "kick-in-the-pants" deadline to work towards (which is how I work best). Because of this minor setback, I have decided to start working on a short series of "Villainous Monkeys". I want to start injecting my work with some more expressive brushwork, and a generally looser style. So, I have set out to create a rouges gallery of monkeys. Below are all unfinished (but close) paintings started early this week (I apologize for the really bad glare on these...they are progress shots, so they aren't intended to be high quality anyway) 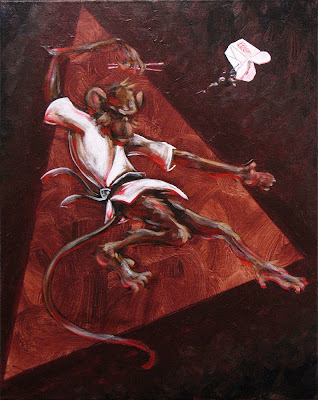 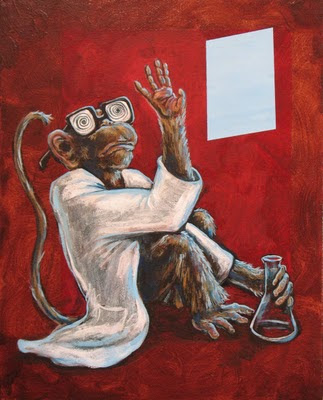 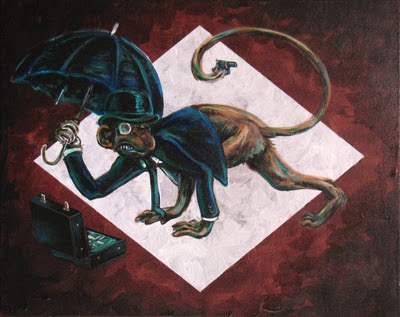 
Let me know what you think about these guys. I don't know how far I will take them, since the tug of Daredevil Monkeys is strong...but I'd be interested in hearing what form you think monkey villainy should take....
No comments: