I dont have much to post this week because it has been a "building" week...That is, I have spent most of my time building a wall to hang the drop for Fictitious on (really just adding pieces to make the 12'x8' wall into a 16'x10' wall) and priming the drop...so no real pictures there...in fact the only truly artistic thing I have to show for the week is the redesign of the flag for Nonexiztia. Redesign, you say? Why yes. Turns out that both the director and I were caught unawares that the Nonexiztian flag needed to be "Blue, Pink, Fuchsia, Brown, Mustard and Turquoise" (which is just about double the number of colors on any real flag....!) So, I present the new, Nonexiztian flag: 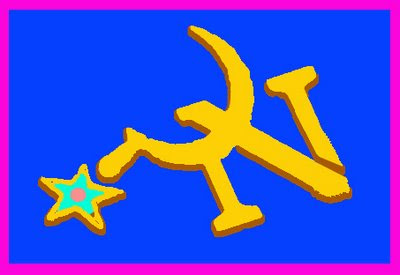 I might also mention that Scenery Appreciation nite for Spooky dog went really well last week, and I'd like to thank everyone (again) for coming out! If you missed it last week, I'd try to get tickets for this Saturday...turns out that the playwright is coming in to see the show...(which is an interesting trifecta for Landless this year...Seems they have had a visit from the playwright for each show they have done this year!)
No comments:

So this is a two week post because I missed last weeks window...I've been busy, and also I have not been managing time as efficiently as possible lately...

First, let me remind you that "Scenery Appreciation nite" for Spooky Dog is this Friday (6/19) and all you need to do is go to the Landless website, and order your tickets...put in the coupon code "JARED" and you receive a discount! Plus, you will get a chance to hang out with the set designer after the show, at no additional cost...

Okay, a super brief wrap up of the past two weeks events: First, I was almost killed at Lubber Run Amphitheater while taking lights off of the basket-on-top-of-a-flagpole setup that they have there. Well, turns out that one of them collapsed from under me while I was going up the ladder that was leaning against it. I jumped to the moss covered roof to safety, and lived to tell the tale 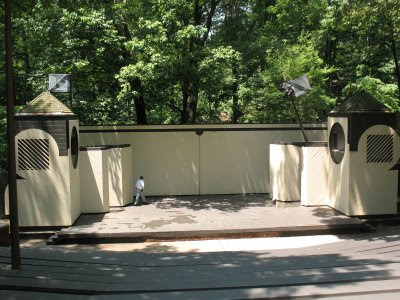 Lubber Run Amphitheater...the tower on the right is the one that collapsed... 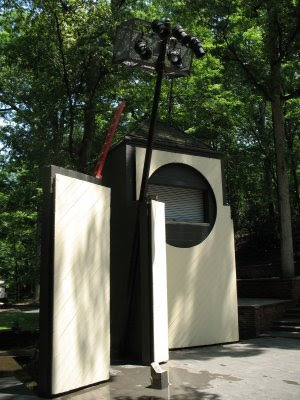 The force of the tower hitting the wing wall knocked the cinder block cap off...and you can see the tiny moss covered roof I jumped to...the ladder is in the position that they got me down from... 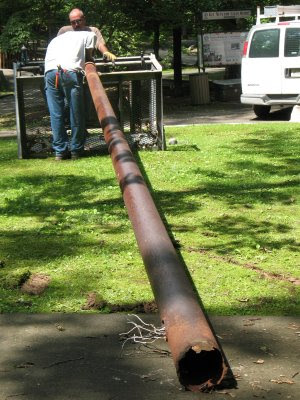 Well there's yer problem...the bottom of the pole had rusted out...
Other events of note that don't have accompanying dramatic pictures are: The David Byrne/Brian Eno concert at Wolf Trap, Rock and Roll at Studio, Looped at the Lincoln, and the Gay Pride Parade

The big monkey off of my back is that I finished the Red Bull Terra-cotta Warriors project. You can see the results below: 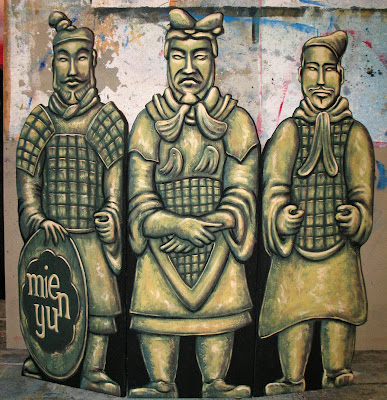 Red Bull and MieNyu Terra-Cotta Warriors Photo Ops
Approx 6'x5' (three pieces hinged together, with removable heads) Acrylic on Plywood.
A Baltimore artist, Charles Lawrance, is going to augment these guys with cutout redbull cans...I'll be sure to post pics when MieNyu has their party in late July...

Lastly, I finally put my nose to the grindstone on Fictitious. Fictitious is a play about (essentially) the life and times of Arnold Schwarzenegger...with some additions and subtractions, like his home country "Nonexista" (who's flag I designed for the show) 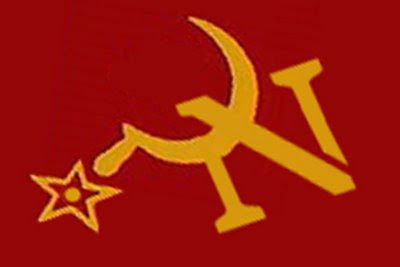 The Nonexistian flag
Fictitious is going to be one of the two entries for Landless theatre in the Capital Fringe Festival this year. Fortunately its in the Warehouse (which I have plenty of design experience in), but unfortunately, its fringe so there is minimal storage and a measly 15 minutes to set up and break down...so, I have tried my best to overcome those limitations and find a design that expresses the tone of the show while accommodating the 20 scenes it takes place in...(did I mention it was a musical?) 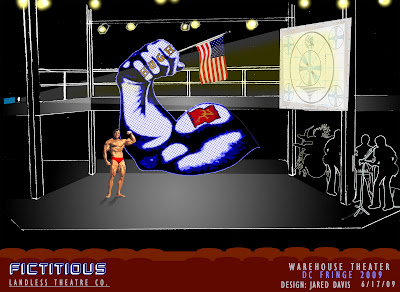 Artomatic opened last weekend... you can get a sense of what kind of evening that was from the only acceptable photo in my camera: 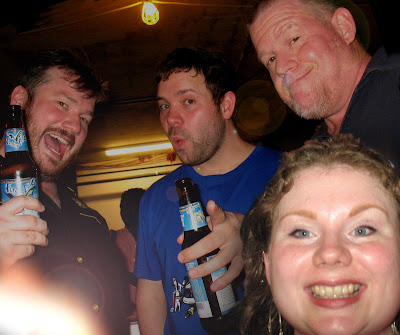 JD, Chris Bishop, Scott Brooks and KT at Artomatic opening night
But the real news is that the Washington Post published an article today (Friday, June 5) that mentions Jared in Uber-collector Phillip Barlow's unofficial roundup of artists he likes at Artomatic. You can read the whole article, HERE.

The other big news of the day is that Spooky Dog and the Teenage Mysteries opens tonight at the DCAC! I got a chance to take some shots at last nights final dress rehearsal... 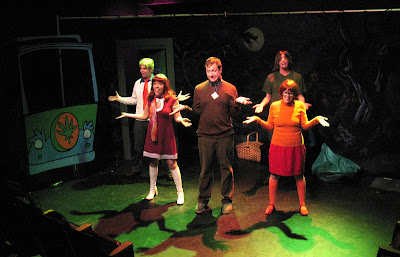 "What? this is parody, you cant sue us!" 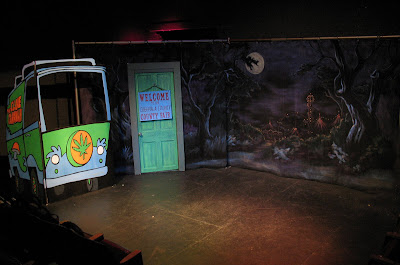 The set without pesky actors... 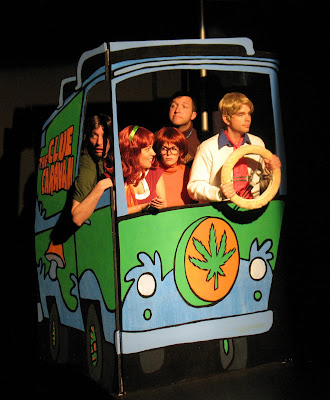 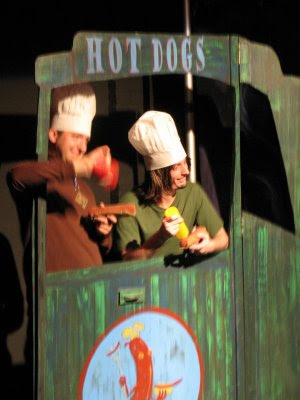 I like this shot because it seems to be from "Scraggly's" point of view... 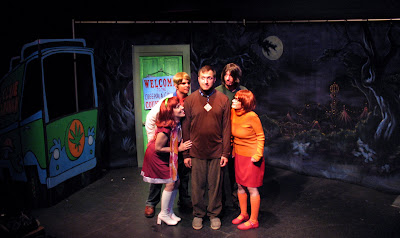 Spooky solves another mystery!
No comments: