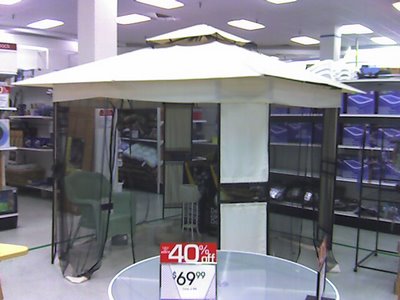 I have been busy. Like a one legged man at an ass kickin' contest...like a one armed paper hanger...like a long tailed cat in a room full of rockin' chairs (maybe not that last one...) So busy in fact, that I have little work to show, and not enough time to complain about it. So I will leave you with a bad phone camera shot of the model for PIRATES...Oh, and one more tease...I might be in your living room sometime this fall...

See you next week! 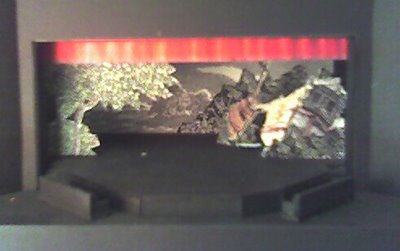 So, I'm not going to Detroit?

Suddenly, our hero finds that he has a free weekend…what will he do?

As it turns out, after working hard on a series of new Tiki paintings, the show was canceled. (Actually, it was moved to Labor Day weekend, which I cannot attend, but I will be sending some work along to show my support for the Detroit scene…) It certainly isn’t the greatest feeling being the “last to know” about something like that, but in the end, I got a whole new set of paintings out of it

Bucky's Lamp
Acrylic and cut paper on Board 4"x10" 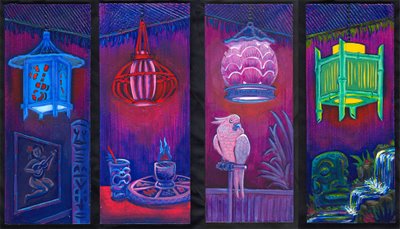 They are based on a set of camera phone photos of the Mai Kai in Massachusetts. (See previous post with a picture of me looking somewhat drunk in a well lit Tiki bar) I have been toying with the idea of making my Tiki stuff more situational. I have resisted narrative for a long time, which has prevented me from making characters to inhabit my paintings. I feel that this is a bit like playing with paper dolls. You might create a narrative, but outside the sandbox it doesn’t amount to much. So I have been keeping to just depicting objects. However, in this series, I have tried to make an absent character the “subject”. That is, each of these paintings is named “(insert name…like Bucky)’s lamp”. This provides the viewer with the idea that this is a lamp in a particular Tiki establishment, owned by a particular proprietor, with individual tastes. For example, Bucky is a modernist-loving owner, who serves Suffering Bastards to the lovelorn patrons at his leather upholstered bar. So I have tried to indirectly show the type of person the proprietor is. Perhaps I have been pondering the death of Marvin Chin a bit too much when I was making these…who knows. Overall, I know that I have given these much more thought than the average hedonistic Tiki consumer, but perhaps they are a signal of a change in my work.

I have been overwhelmed by the amount of work ahead, and this week has been one of diligent painting, but thankfully all the deadlines were mine, and not set by others. However, the time for sloth has ended; I have to put the nose to the grindstone for the next month before I get any breaks…wheeeeeee

Go support the fringe festival. I went to the opening, last night and saw Greg Ferrand’s work at the warehouse (along with too many others to mention) and the new club Avenue. Although I have seen that painting before, I still think its one of the best things he’s done…even if it is an over-the-top “Spanish” painting…someday he and I will attend a bullfight together, before they are banned.

Tune in next week when our protagonist (No, I haven’t forgotten about the naming/ re-branding thing…) hangs up some work at the DCAC Wall Mountables show…plus can he paint an entire children’s theatre camp show in one night, again??????
No comments:

The palace of wonders is a great addition to the H St. corridor. However, at the grand opening on Friday, it seemed that if they anticipate having as large of crowds as they did for this special event, it would be a venue doomed to “not have a good seat in the house”. I can only hope that it will be all it professes to be, and is around for a long time. It does not promise to be a good venue for more than 40 people at a time, and therefore may not be a viable venue for people like Lobs, or Trixie (and especially not their scenery!). Scott and Mike joined KT and me, where we drank Magic hat number 9 and hatched evil plans, while the flea circus boomed and the lasso twirling whizzed by our heads. 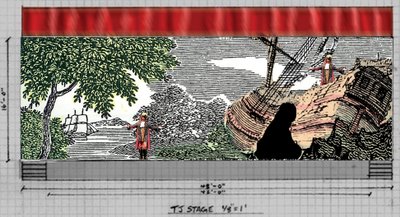 Sketch for Arlington Players production of PIRATES OF PENZANCE
The next day I committed myself fully to making a good first draft for PIRATES OF PENZANCE. I came up with a “colored etching” look that would be consistent with the constraints of this particular production. Because of the lighting renovation at TJ, the show may have to be moved. Hence, I need to make a predominantly 2-D set, that can pack up and be moved in a single truckload. What you are seeing in the sketch are all cut flats (some attached to a 7’ high rolling platform…), and a backdrop. I presented my designs at Malcolm’s poolside to an agreeable reception.

The next day started early, when I took my sorry butt to Seat Pleasant to paint the entire set for JOSEPH. Because of delays in the design for another show that was being produced at Imagination Stage, I was delivered the set to be painted on Friday (the show opened Wednesday!) So, I spent the entire day painting. I started to get loopy around midnight, and decided that that was good enough.

The next morning Dan T and I went the Arlington Cinema and Drafthouse to help repair their grand curtain. Due to a purchasing error (and an inability to diagnose the situation on my part) we decided that more parts needed to be ordered and that the day was pretty much a wash. So we’ll be back to finish the job when the parts come in. 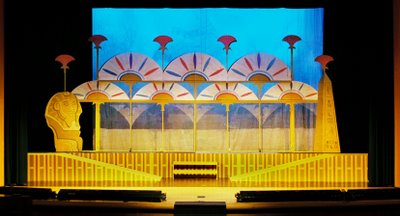 Production photo of JOSEPH AND THE AMAZING TECHNICOLOR DREAMCOAT
Imagination Stage @ CESJDS
I took some portfolio shots of JOSEPH today. Ayun Fedorcha is the lighting designer, and she always makes my work look great. My photos are only so-so. I guess I need to break down and buy a digital camera soon!

I will be fully committed to making a whole bunch of Tiki paintings for the Motor city Tiki show this week. Hopefully I will be far enough along next Wednesday to have some to share digitally! It’s nice to not have a million things going on for one week…just one big one!
1 comment:

Thank you so much for your comments. I realize that I have inadvertently sparked some confusion when I announced my “contest”. Some of you thought it was a contest to change my legal name. Some more cynical folks pointed out that it was vain enough to have a blog at all, let alone hold narcissistic contests. But the overwhelming majority responded: “you have a blog?” Just to clarify, yes. I have a blog. But it could be much cooler. In fact, my whole “thing” could be much cooler. And that is where you come into the picture. I am holding a “contest” (no purchase necessary, void where prohibited) where you, the general (Art-appreciatin’, theater-going, tikiphile, pastie-twirlin’, America-loving, John and Jane Q.) Public will have a say on what shape my next website and “brand” will take. I realize that I announced said contest right before a major holiday, so I am going to extend the deadline until the end of the month, so that everyone will have a chance to add their $0.02.

There have been some pretty good suggestions so far. And some sage advice too…It’s not an easy thing assuming a pen name. People like Mark Twain and Lobsterboy make it look easy. But as we all know, being a superhero is much more than wearing your underwear on the outside of your pants…you have to back it up with being able to leap buildings in a single bound. I will try to live up to that you give me, wearing it proudly on the outside of my pants!

Before I get into the humdrum of the weeks update, I wanted to point out that I have added some links to my list on the right, in hopes of spreading the cyber-love around a bit…so please visit some of my friends!

With the summer rains come thoughts of adding bathrooms to the basement…after all, were spending lots of money installing that pump, why not just demolish the whole basement and add a bathroom? 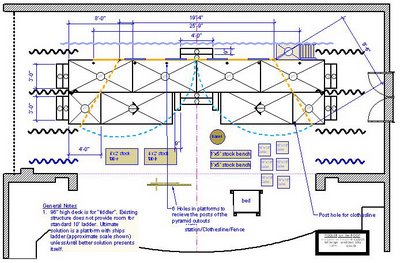 Floorplan for Fiddler on the Roof for Imagination Stage
Created in Vectorworks
I turned in the final drafts of Fiddler…It continues to surprise me how fast the summer is clipping along. Ill have to paint ALL of JOSEPH before they open, next Wednesday. (!)

Sara’s Birthday was celebrated at Glen Echo, in the Spanish Ballroom. If you even remotely like swing dancing, this is the place for you. We had a blast. In an effort to be authentic (or cheap) they don’t air condition the place, so we all lost our own weight in sweat by the end of the night. In fact, the website recommends that gentlemen bring additional shirts to change into!

Before that was the closing reception for ReMastered. I guess my Laocoon will be on permanent display in the dining room. Anyone got a fish tank I can put below it?

And just like that, I have started researching for PIRATES of PENZANCE. My first production meeting is on Saturday. Perhaps some sketches for you to see next week!

The 4th of July is a long story this year, so I’ll try to sum up in one sentence. Because of the budget crisis in New Jersey, our planned escape for KT’s birthday was changed to a hotel in Virginia, with a stellar view of the fireworks, followed by a day of shopping at Potomac Mills. God bless America.

Finally, mark your calendars! On July 22 (about two weeks!) The MOTOR CITY TIKI Show will be held at Chin’s in Livonia, MI. This is a great Tiki show; at a really great specimen of a Tiki restaurant (it’s got its own page in Tiki Road Trip). I will have (hopefully) about a dozen new paintings for sale, and will probably take home more Tiki stuff than I bring! More info at: www.motorcitytiki.com
2 comments: