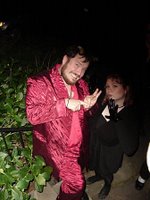 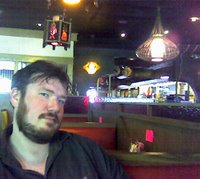 I’ve been to Maine and back since my last post. KT and I went to Adams Wedding, where we saw many people that we don’t get to see regularly. Maine itself was a bit like upper Michigan, which means it’s a nice place to visit, but… We also got a chance to make tiki road trip pay for itself...Left is a picture of me at the BALI HAI near Boston...(and Right, just for fun, is a picture of me, making devilish hand jestures, and KT in evil regalia at the role playing party)

Before we left I got a chance to catch the opening at the Gallery Plan B. There was a group show of prints, mostly, but the work had a very conservative feel, if not timid. It was odd to hear feedback about the blog, and a bit awkward since I only had so much to say that hadn’t been said on the blog…which is why I won’t bump up the postings to twice a week (despite requests to the contrary). One of the things that I got out of that particular show was that there are so few places that emerging artists can show regularly in this town. I know that Plan B has a lot of faculty from surrounding art programs, which is a nice way to keep “publishing” (instead of perishing) but for the emerging artist, the pickin’s are slim. (While I’m thinking about it: shout out to Molly Ruppert, for keepin’ it real with ArtRomp!)

On the way back from Maine, we stopped in Boston (which KT has declared a personal vendetta against) and popped into the MFA. It was better than I remembered (the $15 admission is kinda steep!) and I was able to get a close look at the Rubens (the one with the Arab) which was so big in my youth. I was blown away by the murals by Sargent. It heartens me to know that he was able to convert his style to a simpler, bolder, more theatrical mode in order to make the work look good from a distance. 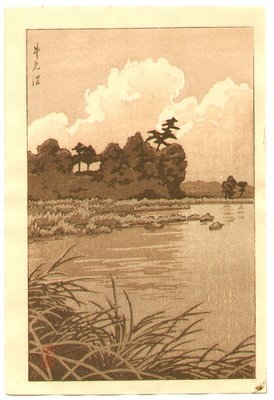 Kawase Hasui Ushinku Marsh and Summer Clouds
c. 1930's Woodblock Print on Paper 5"x7"
In Maine I scored a Hasui print, a small sepia toned landscape of a marsh with summer clouds for $40 at an Antique market. I looked it up when I got home. Its one of the ones in Robert O. Muller’s collection, that just went for $150 at auction…but the money is not what it’s about, it’s a really charming print. There is something about Hasui’s method of constructing the print that gives it that summery, déjà vu look…and here he is able to do it without color! (I found on this trip that KT does not share my enthusiasm for Shin Hanga prints…)

On the Lobs front: A bonus feature has been added to the June 25th show…after the show, they will be screening ATTACK OF THE GIANT LEECHES!!!!! Get your tickets now!

Here are some links that I believe will be interested