Art-o-Matic open! Sympathy for the Devil!

So, to start up where I left off in the last post, I went to Yuri's night...got there at the end, "to the moon" was playing, and I started to talk to those guys about doing a gig like this next year...at an art show...Let me see how Art in Heat goes, then we can talk about the Yuri's night 2008 art show and space cabaret!

Panoramic "Stitched" photo of Art-o-Matic room (just Jared's side)
Anyway, Artomatic opened, I happened to be the only one in a devil suit on Friday. Turns out that the costume aspect of the Friday the 13th opening was not as well publicised as I thought...anyhoo, It was a great opening, and there were many people I scared off because I was dressed like the devil. Sara and Kirstra had my back in KT's absence, and I was introduced to Robert, who bought a painting (one of the hula lamp series)...all I can say about Robert, is that he knows how to get on an artist's good side...One of the other pieces I sold at the opening was still life with takeout: 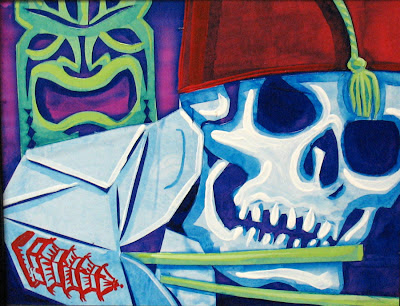 On Saturday I did my volunteer shift (they sent me an email the next day saying that I didn't show up and that I would be banned from AOM forever!...it wasn't true! I DID work on Saturday!) and sold a few more pieces: 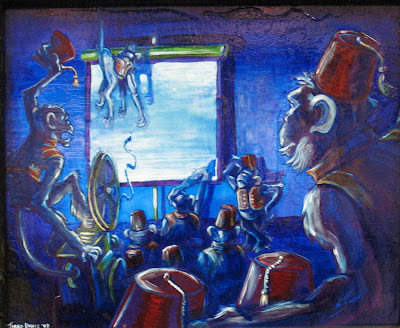 Screening at the organ grinders local 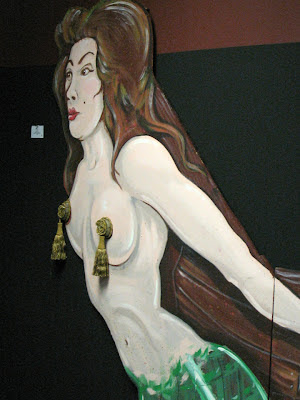 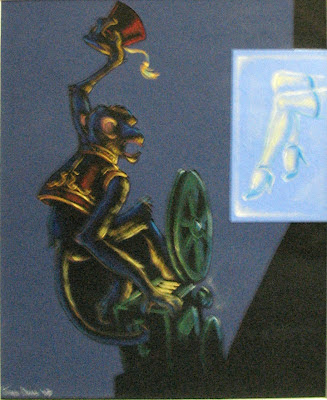 So the subtext here is that you folks who want any of this stuff better get your butt down to AOM ASAP! Cuz its goin' fast!

I have experimented with using Paypal for the payment method for these works, and It has seemed to work out so far...I'll let you know if there are any problems over the next month or so.

Oh, hey, I almost forgot, I couldn't attend the opening of MAP's Out of Order in Baltimore, but I did have a piece there: 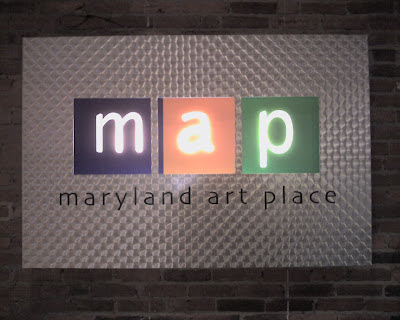 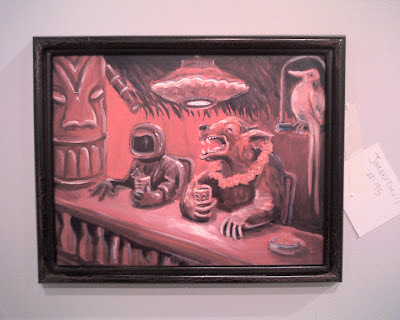 I haven't heard if its sold yet...but it must not have because I have until Saturday to pick it up and I haven't gotten an email or anything...

On Monday I skipped out on half of my classes to go to the DC Voting rights march...I got there too late to march (it was really crappy out too!), however, since I was down there anyway, I went to see the Jasper Johns show at the NGA...it wasn't too bad, but I still got the feeling that I didn't agree with the purposeful "impoverished" or "bohemian" stance these pictures take...

Anyway, here is the final picture of the the second Academic figure drawing class painting: 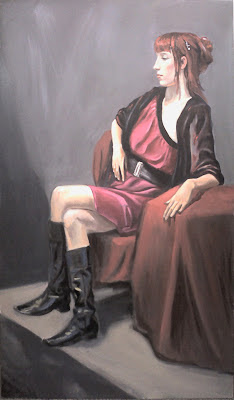 Academic Portrait painting, second model Final
Here is the first session of the last model we will have: 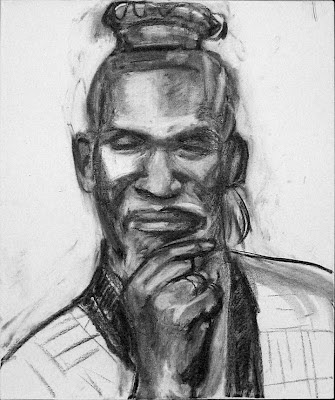 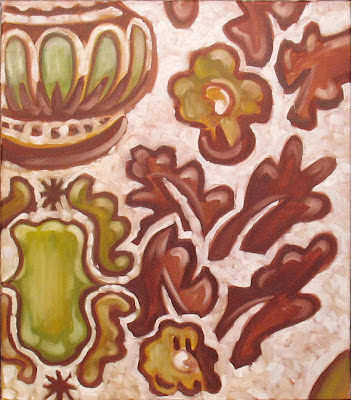 I'm off to Baltimore tomorrow to talk to Trixie about the Sardine Can 2.1 (remember that?)...later gators (as Trixie would say)

Aw, Jared - The devil costume at AOM was perfect - maybe even better because no one else got the costume memo... or at least had the cajones to follow through (myself included).

Congrats on all of the demand for the paintings - I shoould have jumped on that organ grinders painting before it went...

Actually, You could still score the Projectionist...I havent heard a peep from the person who wanted it in the first place...so I took the red dot off yesterday...