Wow, I really didn't see this coming...I did a phone interview in March, and promptly forgot about it (I was a bit busy with Yuri's Night at the time, you know...)

I've taken the liberty to cut and paste the article below, but if you would like to visit the source (Thrillist DC) you can find it HERE. 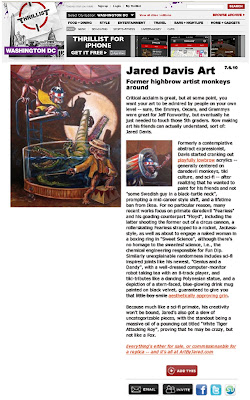 Critical acclaim is great, but at some point, you want your art to be admired by people on your own level -- sure, the Emmys, Oscars, and Grammys were great for Jeff Foxworthy, but eventually he just needed to touch those 5th graders. Now making art his friends can actually understand, sort of: Jared Davis.

Formerly a contemplative abstract expressionist, Davis started cranking out playfully lowbrow acrylics -- generally centered on daredevil monkeys, tiki culture, and sci-fi -- after realizing that he wanted to paint for his friends and not "some Swedish guy in a black-turtle neck", prompting a mid-career style shift, and a lifetime ban from Ikea. For no particular reason, many recent works focus on primate daredevil "Fearless" and his goading counterpart "Floyd", including the latter shooting the former out of a circus cannon, a rollerskating Fearless strapped to a rocket, Jackass-style, as well as about to engage a naked woman in a boxing ring in "Sweet Science", although there's no homage to the sweetest science, i.e., the chemical engineering responsible for Fun Dip. Similarly unexplainable randomness includes sci-fi inspired joints like his newest, "Genius and a Dandy", with a well-dressed computer-monitor robot taking tea with an 8-track player, and tiki-tributes like a dancing Polynesian statue, and a depiction of a stern-faced, blue-glowing drink mug painted on black velvet, guaranteed to give you that little boy smile aesthetically approving grin.
Because much like a sci-fi primate, his creativity won't be bound, Jared's also got a slew of uncategorizable pieces, with the standout being a massive oil of a pouncing cat titled "White Tiger Attacking Roy", proving that he may be crazy, but not like a Fox.

Aside from that amazing piece of investigative journalism, I also finished a commission for a film that is shooting in this area. I cant really tell you more than it involves cheerleading and features one of the main actors in three men and a baby...below you can see the backdrop they commissioned... 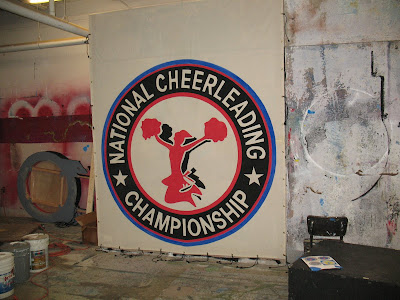