Chris Griffin, (no, not the Family Guy character, you cretins) who is ever the busy bee, has seen fit to include me in a small group show at the Electric Maid in Takoma Park. Its going to be a robot-themed show called "It's Electric". I will have some paintings there hanging next to the work of Todd Gardner, and Steve Strawn. The opening will be on Saturday February 6th, 8-11pm.

Unfortunately, I don't have any robot paintings on hand (they sell like hotcakes, and the last ones I made went for stocking stuffers) but I have decided to take up the challenge to make more Robots! Its actually kinda fortunate, because I was already gearing up to make some Science Fiction paintings for Yuri's Night. You see, I came to the realization that Science Fiction is best when it is telling an epic story. Star Wars is a prime example. It is well known that George Lucas was highly influenced by Joseph Campbell's "Power of Myth" Books. The epic story, with its archetypal characters and universal themes is what made the backbone of Star Wars so strong. Not long ago, I decided that I wanted to incorporate this idea into my Science Fiction paintings. So, with this Robot show coming up, I began to implement the plan. First I decided on some of the archetypal characters (e.g. the hero, wise man, sea monster, etc) and then I started pairing them off in order to see what sort of pictures were inspired by the combinations...I did some quick sketches, and then started a watercolor sketch in my sketchbook as a study for what might become a final painting. The first of these pairings was The Birdman and the Magic Cow: 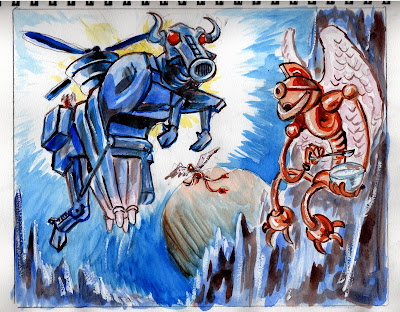 The Birdman and the Magic Cow Watercolor sketch
Watercolor on Paper, 10"x8"

Since I am working towards making paintings for the Robot show, I have been doing my best to make all of the roles robot-oriented. I don't know why this was the image I saw when I put these two characters together, but somehow a winged cereal eating robot on a craggy planet, getting his milk from a giant flying robot cow just seem right... 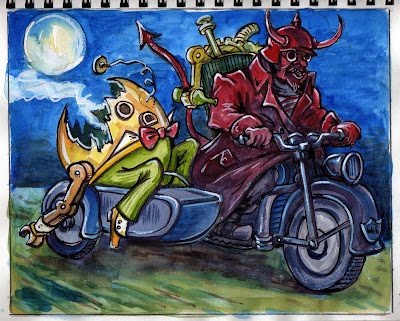 The Devil and the Broken Man Watercolor Sketch
Watercolor on Paper, 10"x8"
This paring seemed to me like an obvious one, because you can always link the Devil to temptation, and temptation is how most people become "broken". In epic terms the "broken man" is the private detective who is too drunk to take the case, but sobers up just in time to solve the crime...perhaps someone like Han Solo, who has lost (perhaps never had) his idealism...but in this interpretation, the robot in the sidecar is more like CP-3O in Empire Strikes Back, being toted around, literally in pieces, by Chewbacca. I allude to the sin/drunkenness by having the robot arm in the basket holding a liquor bottle, but that might be too heavy handed. The Devil as "trash picker" is appealing for the obvious reasons, but I particularly like the glee (and style) with which he is willing to facilitate the removal of the broken man...

We have been doing a full court press on the space search for Yuri's Night...we might wind up with a very swanky event this year...stay tuned...

This week has been crunch week for Reefer Madness. You can get all sorts of cool insights on the show from Dominion Stage's Reefer Madness blog. Be sure to check out the videos of work in the shop...there are some really cool time lapse videos of the scenery being painted. I'll announce when Scenery Appreciation Night will be next week!

I like these! This may inspire me to finally netflix the 6-part bill moyers "Power of Myth" series... Have you seen it?

It's pretty good...I mean, Power of Myth is kinda pase' now, but it some really fun "required reading"...If you get a Roku, (or watch on your computer from your Netflix account) you can stream the whole thing for free, you know...