November is the slowest month....

November is always the slowest month for me. It's right after the Halloween party, and everything just seems to creep along. I guess its because people are anticipating the hectic pace of December that makes things seem to be on the slow creep. Personally, I cant seem to do half of what I want, even though I have twice the time to do it in!

I've started the designs for Carrie Potter at the New Moon Prom, and A Christmas Twist (the two holiday offerings from Landless Theater Co.) but I only have the design for Carrie Potter on hand (remember that whole half the stuff in twice the time thing?) 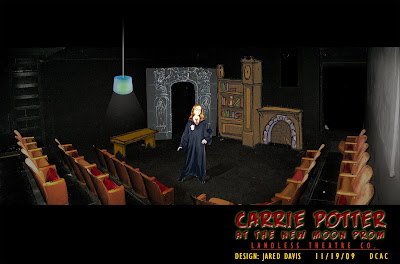 Carrie Potter At The New Moon Prom set design
Pencil and Photoshop
Since the Halloween party I have needed something to obsess over, so I have decided that its never too early to start working on YURI"S NIGHT!!! So, I have started working on some graphics for our preemptive "save the date" campaign. 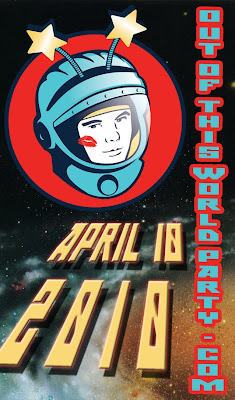 This one is my favorite, because it is, well, AWESOME! But KT says that it's too busy...

So, we are working on a simpler and more sloganey sorta thing: 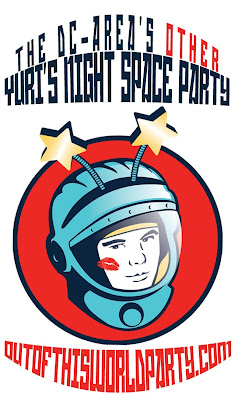 DC's Other Space Party...whaddyathink? I don't want to appear to be in competition with Goddard, but lets face it, they have a monopoly on all of the real space stuff in the area! We have to let people know that we are different and have something else (other than hardcore science) to offer...

I call this one the "vomit comet" version...I like it because it feels like the type of good time you would have in the zero G test flight...not that we are offering any zero G test flights at the party (like some other Yuri's Nights) but it just looks like a good time to me!

What do you guys think of the new slogan? I would love to hear any suggestions...

Love the "vomit comet". What about having one of those human size hamster balls that spin you around till you throw up?

The slogan looks to me like "The Other Yuri's Night Space Party".

Thanks Ashley, I like the vomit comet one too...We have always toyed with the moonbounce idea, but hadn't really considered the human hamster ball...I fear that some drunkard will try to steal it and try to get it on the metro...

Selki, I think the first poster (really they are supposed to be business cards) conveys that "pulp science-fiction" feel...as for the slogan, there are hundreds of Yuri's Nights around the world, so we still need to indicated its around DC...So, "DC-Area" "Metro DC" "DC VA MD"..."the Washington spaceport"...

I'm not sure about calling yourselves the DC area's "other" Yuri's Night - you guys are "THE" DC areas Yuri's night!