Thanks to a rockin' "Homie help day" on Sunday, I can now officially declare victory over carpentry and painting for Spooktacular X! Thanks to the artistic talents of Scott and Alan, the Kraken was was tamed without too much bloodshed. The S.S. Spooktacular was made ship-shape by Elizabeth, Blair, Gwen, Jei, Jim, Jaya and Mike. It has all come together nicely, and it could not have been done without the zeal and talents of these Homies...when you see them at the party, let them cut in the Margarita line, wont ya?

So, I don't want to spoil the event by posting the photos of the completed scenery too early (considering that this blog has a readership of about 45, and we have 100+ planning to attend, I think it wont be spoiled for about half of the attendees...) but I am so excited that I will post them anyway! 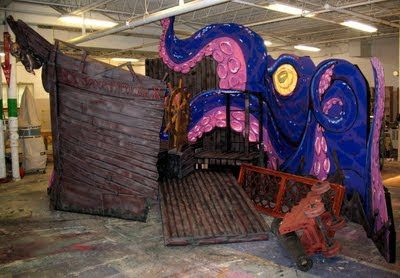 Kraken Attacking the S.S. Spooktacular X
Backyard installation, Mixed Media
So, there it is! Cool, right? the idea is that party-goers will walk up the shipwreck and fish off of the bow for prizes. You cant tell from the photo here, but also the eye will glow... Whew, now I just need to move the whole thing to the backyard! (my fingers are still crossed that we wont have rain on Saturday!)

The other big accomplishment was the completion of the "Karaoke Cavern" backdrop...We decided that the basement needed to have an underwater theme. So, I thought that it'd be cool if you were singing Karaoke in front of a submarine's observation window...here's the sketch: 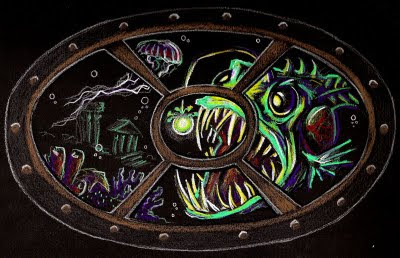 Karaoke Cavern backdrop sketch
Color Pencil on Black Paper, 8.5 x 11
I decided that we could be looking at a really deep part of the ocean...so what better than an giant angler fish to light up the depths? Unfortunately, the bastards at Disney had a really great scene in Finding Nemo where Nemo's dad and Dory go down really deep and encounter an angler fish...and there are only so many ways to do a menacing fish like that...I don't think we can call this outright theft (because I have added the portal and other things to the composition) but it is definitely heavy borrowing...I suppose that they ruined clown fish for every artist too...and it'd be really nice if they didn't get all litigious on people, so I didn't have to be looking over my shoulder whenever I am influenced by their gorgeous designs...Anyway, I think that the scale of the thing is also what sets it apart (which you don't get from the sketch...the fish could definitely eat you, its so big) which translates best in the final product: 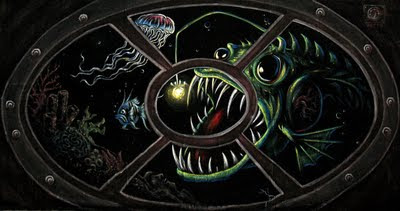 Karaoke Cavern backdrop
Acrylic on Velour, 12' x 6.5'
Pretty wicked eh? The velour is really great for this type of painting...I changed the composition around a bit in the final product. I decided not to go with a hint of Atlantis in the background, and simply go with a small fish that is the next intended meal for our Angler...I also had room to add some other spooky goodies, like a Moai, a depth gauge, and a crack in the glass...

Hopefully I will have the energy next week to post pictures from the party...in the meantime, Happy Halloween!

YAAARRRR!!! (there is no direct translation of the phrase "No, thank YOU!" into pirate speak...)